Tessa Prieto-Valdes: where she gets her hats and outfits, how much she spends and saves, and why there's more to her flamboyance 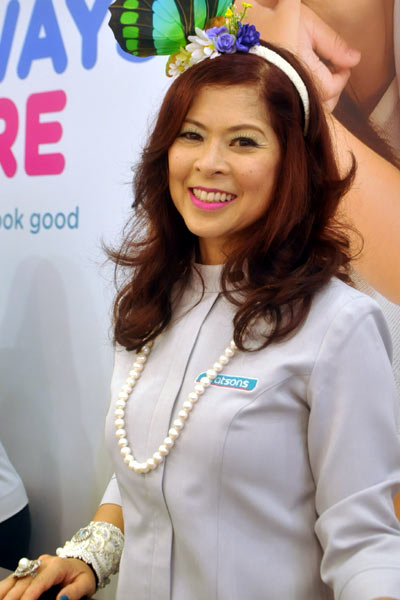 Tessa Prieto-Valdes admits to shopping "in excess," but she also believes in saving and giving back to people.

Socialite Tessa Prieto-Valdes may be a walking portrait of all things luxurious, but the energetic woman can talk delightfully about savings, as well.

“Saving now is also being economical and eco-friendly,” Tessa told PEP.ph (Philippine Entertainment Portal) at the Switch and Save campaign of the personal care store Watsons.

The event was held last May 2, at the store’s SM Aura Premier branch in Taguig City.

“If you can buy the bigger packaging, the better, because it’s gonna last you longer.

"I also would recommend people to buy in bulk. That way, you have less trash and you can save.

"Do your own share in saving, in being eco-friendly.

"And of course, you know, you try to save wherein there’s always a promo. You can stock up early and save in that way.

However, Tessa quickly admitted that her husband thinks she shops too much. “I’m the worse. Haha! I really shop in excess. So at least, that’s my reason for spending, because anyway, I save in Watsons. Ginagawa ko ng dahilan. Everything in life is balanced. You spend so much, you save in Watsons.”

Tessa has been an endorser of the store for the past three years. “Before I was a Watsons endorser, I’ve also been going to Watsons abroad,” she said.

“So when they came here, I’m so happy that they’re here.

"You know what it is? I discover things that you wouldn’t think that they have. Like today, I found out they have candles, tea candles, they have disposable panties, things like that. You don’t know until you’re here.”

A beauty maven, Tessa raved, “I also use this as a one-shop make-up stop. Because I think, you know, I love liquid eyeliner. For me, they also have. They don’t have lashes. That’s my next effort, to have them carry lashes. They have glue though, but not lashes.”

HEALTH AND FASHION. Tessa believes that when it comes to taking care of one’s health, it pays to be practical.

“The savings of being healthy is so important,” she emphasized. “You don’t have to be wealthy or whatever to be healthy. Health should be something that’s affordable.

"Generic brands have exactly the same amount of contents. It’s just a generic brand, that’s why they can command a really lower price.

"So it’s not like I’m not saying the other brands are better, it’s just that I’m just saying it’s the same thing. So why are you gonna waste money?”

The one thing that Tessa finds hard to scrimp on—as apparent in all her photos and social media posts—is her outfit.

Still, she tries to find ways to save: “I save by shopping in bulk. So whenever my supplier of the hats come, wholesale! Ako lang ang may wholesale ng lashes, ng hats, ng mga accessories. I have a lot of suppliers from Cebu, and what they do is like, they sell me na lang wholesale price.”

She added, “’Cause I’m really a proud Filipina. Everywhere I go in the globe, talagang I’m wearing a hat. And they always say, ‘Where is it from?’ And I say, ‘From the Philippines.’ I’m so proud na I represent the Philippines whenever I go abroad.”

When we asked her about her daily splurge, she utters with a laugh: “That list is longer that the savings side. We’ll be here till tomorrow. But my top three are like the clothes, especially designer clothes. Because whenever I go out, it’s hard for me to repeat kasi, e.

"I mean, that’s me, that’s the expression I have. Aside from that, I love my hats as well, and I love accessories. They’re not real jewelry, but they’re mahal pa rin, 'di ba?

"Things like that, I love. I spend way too much for that. But, I mean, I don’t do alcohol or drugs. You can put that on the record.”

GIVING BACK. It’s important to note that Tessa is generous when it comes to her blessings.

“I have my Assumption Mission Schools,” she revealed. “We house a lot of schools. And then we have a housing project in Mercedes, Eastern Samar. It’s a town devastated by Typhoon Yolanda that has not been served because everything goes to Tacloban.

"They don’t know that Eastern Samar was the first to get hit. So for my 20th wedding anniversary last year, we gave 20 homes. Super iyak ako. ’Cause, you know, they’re so appreciative, and it’s their home. And that’s continuous. And every year, I have a big Red Cross gala. So that’s my charity as well.”

Tessa is also an avid diver and an environmentalist. She lists the municipalities of Coron and El Nido, in the province of Palawan, The Tubbataha Reefs National Park, Davao City, and Boracay island as her favorite travel destinations.

“Davao, I just discovered, like yesterday. Not naman my first time there, but I love it because aside from being the land of suha and stuff, they have so many products na parang native stuff and pearls.

"I also have a campaign where I’m saving the Philippine reef from destruction. We have a cleanup day as well, and we sustain the lighthouse there.

"That’s my other life. My diving. My diving buddies, we always donate to the charity there, those that are saving the seas.”