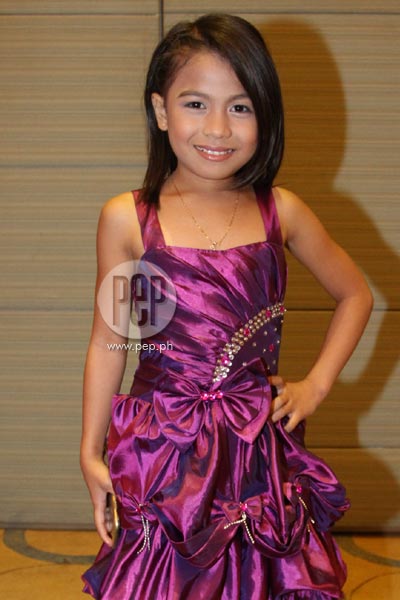 The Voice Kids champ Lyca Gairanod is already revealing her cheeky personality. And to think she's only ten years old!

PEP.ph (Philippine Entertainment Portal) caught up with her before she went onstage during The PEP List Year 2 press conference, where she was announced as PEPster's Choice Child Star of the Year.

With her PEP award further validating her worth as a singer and performer, the young singer acknowledged the people who helped put her on a pedestal.

Not one to rest on her laurels, Lyca revealed that she still continues to do what her coach-mentor Sarah Geronimo had taught her.

She could not say how many hours a day she would this, although she confessed, "Minsan 'di ako nagbo-vocalize."

Lyca was feeling so good she indulged us with a few lines of a song before she sat down to get her make-up done.

SACRIFICES. A singer's life isn't all rosy, though. In order to protect her golden voice, Lyca shared that some sacrifices have to be made.

PERKS. On the other hand, there are perks in a singer’s life that outweigh the hardships.

She gets to travel, for instance. Lyca animatedly recounted her travel experiences.

After The Voice Kids, Lyca also got to travel to Canada for the first time, "Masaya po. Na-enjoy ko yung saya."

STARSTRUCK. At ABS-CBN, she has been given the chance to meet and rub elbows with the stars she could only dream about when she was just a child.

Asked if there's anyone else she would like to meet, she answered, "Lahat naman, lahat ng nakita ko.

PROJECTS. With all her accomplishments, Lyca revealed she wants to do more.

However, Lyca said she would want to do lighter roles, "Yung parang sa Nathaniel lang muna."

What about romantic comedies, like her idol and mentor Sarah?

We teased her about her partner was in her music video, she naughtily quipped, "Secret po!"

MATURE. Before she finished getting her hair and make-up done for The PEP List presscon, Lyca also shared how her classmates have changed their perception of her— thankfully for the better.

As she continued telling her story, she sounded grown up, displaying a level of wisdom and maturity uncommon for someone her age.

Young as she is, Lyca is aware of intrigues in showbiz and knows how to stay away from negativity, "Hindi po ako nagbabasa ng comments.

SECURITY. A way that Lyca has ensured the future of her family is to put her money in trust.

According to her, ABS-CBN hasn't released her P1-million prize money yet.

How do they survive then?