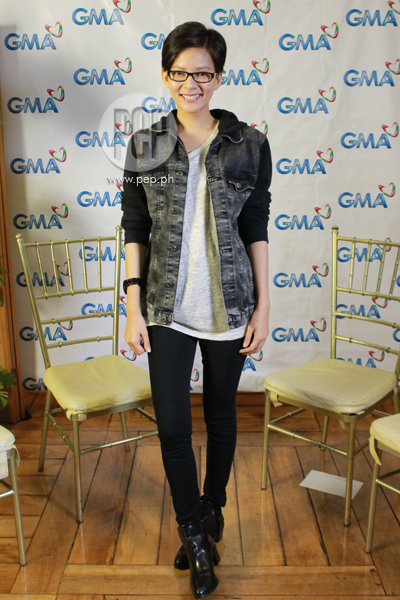 Chynna Ortaleza is thankful to Kean Cipriano and his friends for letting her join their music video production. “I’m very thankful to them kasi they really help me and inspire me na i-propel yung self ko as a artist.”

Aside from being a versatile actress, The Rich Man’s Daughter star Chynna Ortaleza has started venturing into directing.

She shared that very recently, she has done some assistant director work in music video shoots.

Chynna said she really want to become a director in the near future.

“If I’m given an opportunity to direct, I will direct.

“And one of these days, maybe I’ll be directing naman.

KEAN CIPRIANO. One of her influences right now is Kean Cipriano, who has been rumored to be the new man that makes her happy.

“Kasi like, 'di ba, right now si Kean Cipriano...I met him when we worked together here in GMA.

“Well that’s when we got to talk to each other kasi I met him na before before pa and then from there, parang after a few months nag-reconnect kami.

“Tapos ‘yon, I’m very thankful like to Kean and to his friends...

“I’m very thankful to them kasi they really help me and inspire me na i-propel yung self ko as a artist.”

NEXT GOAL. Her friends have been encouraging her as well to publish a book, since she is into writing and art, but she has to wait for the right time.

“Well, marami na din nagsu-suggest na parang, ‘Why don’t you publish a book one of these days, and ako, I’m just waiting for the perfect opportunity and the perfect message to come my way.”

ENJOYING FAME. Chynna has been in the limelight since she was 12, after getting a hosting stint in the now-defunct kiddie magazine show 5 & Up.

She then starred as a teen star in the youth-oriented show Click, where she was paired with Richard Gutierrez.

Their love team was such a hit that they were included (and also formed a love triangle with Chynna’s ex-boyfriend Railey Valeroso) in the primetime series Habang Kapiling Ka, which starred Angelika dela Cruz and Toni Gonzaga.

They also headlined the first two seasons of Love to Love: Maid for Each Other and 1, 2 Love.

However, when her team-up with Richard ended, she was given supporting and villain roles.

Currently, she is playing the role Batchi Luna, a "butch", in the teleserye The Rich Man's Daughter.

But she said that in her 14 years in the industry, she was proud of every project, big or small, she did.

“I really don’t believe in small roles. Actually I’m happy that this happened to me early in my career.

“Parang I went to the phase of becoming like super famous during the time when I was in Click.

“That was no joke. That was fame and I felt that."

But she admitted, “And the truth, I did not enjoy it. Kumbaga parang I felt like this is all false love!

“Kasi feeling ko, nobody knows who I really am. But they just admire me for the projection that is being fed during that time.

“So after 14 years in the industry, I still find the same people before who admire me.

“And now parang I feel better, I sit more comfortably with the admiration because I know na these people have seen me grow up and feeling ko na totoo na yung nakikita nila na tao, hindi na siya yung parang product of the business.”

DREAM ROLES. As far as acting is concerned, Chynna said she still has a long way to go.

“The people that I look up to in the States, sila Meryl Streep, she can do anything.

"These are the people that I grew up admiring.

“Now, gusto ko yung mga psychotic characters. I enjoy it. But, at the same time, there are so many aspects to it kasi.

“I’m happy na they have something like this – TRMD [The Rich Man’s Daughter], where nobody is kontrabida, kumbaga everybody’s human.