Binibining Pilipinas 2015 titlists give glimpse of journey as beauty queens 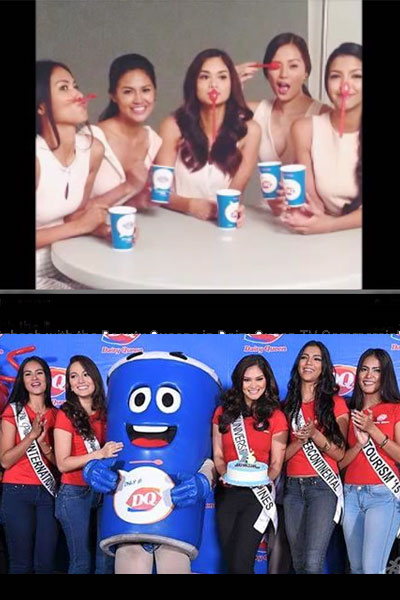 They always seem poised and composed, but beauty queens are usually a bundle of nerves before they are thrust into the limelight.

“But when you get to the set parang, ‘Wow, ito na! Sobrang ganda ng set.'”

She summed up the experience by saying, “We were once ordinary girls, and now we’re all over!

The same can be said of their current journey to their respective international pageants.

LIFE AS A BINIBINI. Being the new brand ambassadors was one of the many responsibilities attached to the ladies when they won in the pageant three months ago.

The change in their lifestyle has began sinking in.

For her part, Pia recalled their early days in the Binibini Pilipinas competition when the 34 candidates rehearsed wearing the same shirts with their respective numbers.

“You know we used to rehearse in this room, as candidates. All 34 of us.

“People won’t even know our names, just our numbers. And now, we’re there,” she said, gesturing toward their tarpaulin.

“My life changed overnight. Even if I was already a runner up before, it’s not the same.

“As soon as I stepped off stage, it was back to work. So straight away, we went back to work. My life changed because I work everyday now.

"In the gym and here, so two kinds of work—working out and actually working with Binibining, and I like it.”

Ann is still getting used to people who now recognize her, “Since I’m a probinsya, dati naglalakad lang ako, wala nakakakilala sa’kin,

“Ngayon maglalakad ka, kailangan maayos kasi everyone knows you, everyone recognizes you.”

And aside from being poised most of the time, they now realize that the title comes with a commitment to "be examples to the youth and to be good role models," said Christi.

Citing their volunteer work with Operation Smile Philippines, she added, “We have duties to fulfill, and we are grateful to represent the Philippines abroad and bring pride to our country.”

There's the fame, some responsibilities, and some privileges "like this, you can have this TV commercial in an instant,” said Janicel.

She also said that her exposure through Dairy Queen will be one of her ways to gain support for her campaign to be the next Miss International.

Pia hopes to do the same, “I had my camera with me at that time—not just my phone but my camera—and I was taking a lot of behind-the-scenes, so I had a lot of memories, a lot of remembrance in my camera.

“And maybe, you know, with those little things, I’ll be able to use it for Miss Universe, we’ll see."

Their respective international pageants will take place later this year with Miss International 2015 happening first on November 5, 2015, in Tokyo, Japan; then, the 64th Miss Universe pageant which will be held in China.