Rhian Ramos admits to having girl crushes but... 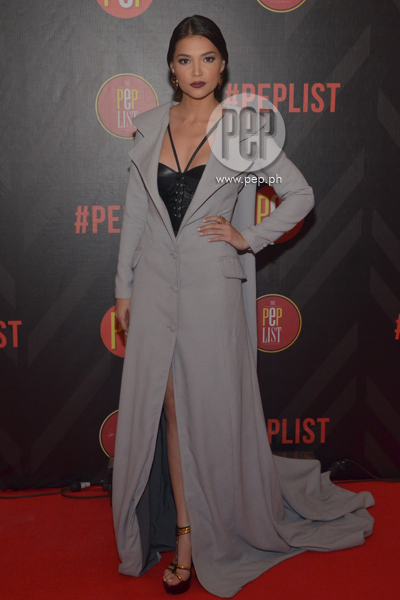 Rhian Ramos honestly did not expect the positive reception that a controversial show like The Rich Man's Daughter (TRMD) would get.

When PEP.ph (Philippine Entertainment Portal) chatted with the Kapuso star at the recent The PEP List awards, it seemed she had fully embraced her Jade character in TRMD, as she sported a long grey trench coat by Marc Tamayo and a tight and sexy black Emir Yamamoto corset.

She definitely stood out in the sea of gown-clad women yet looked very comfortable in her outfit that captured the androgynous look she was aiming for.

Rhian revealed how her dad's advice gave her the courage to accept the role.

"Parang when I remember my Dad saying that, whenever there is something that I am scared of, like when TRMD was offered to me, I remember that and think, I don't wanna regret not taking it."

TIMELY ROLE. In the current social-media climate where the rights and equality of the gay and lesbian community are discussed openly, Rhian said this role is timely.

But still, she was surprised with how the Pinoy viewers have been supporting the series so far.

"Coming into the project, I was actually really apprehensive about what kind of reactions we would get."

Luis Alandy, her erstwhile boyfriend on the series and her escort during the event, chimed in, "We were scared because of the controversial issues but quite overwhelmed kasi yung following, yung response with Twitter, Instagram, they post everyday, they tag us in different photos."

"I would hear about the battles that My Husband's Lover had to go through and luckily, that show paved the way also for our show to not get those kinds of reactions, so buti na lang."

SECURE WITH HER SEXUALITY. She isn't aware of people who are now questioning her sexuality, thinking that the reel Jade began coming out in the real Rhian.

But she said it's all in good sport.

She proudly shared, "We do have a good relationship with the fans of the show, na alam din namin how to make them happy.

"And we play along with them on Twitter and they actually ask for it."

We asked her to clarify what she means by being a good sport and she explained, “When they ask for something like, 'Uy, isang sweet naman na message diyan.'

But for real, what she truly feels about her screen partner, "I do see Glaiza as a friend!"

GIRL CRUSHES? Rhian replied, "Not so much naman...

“I have moments where I would appreciate another woman for her beauty and strength but it's more of in the way na I would like to be like her.