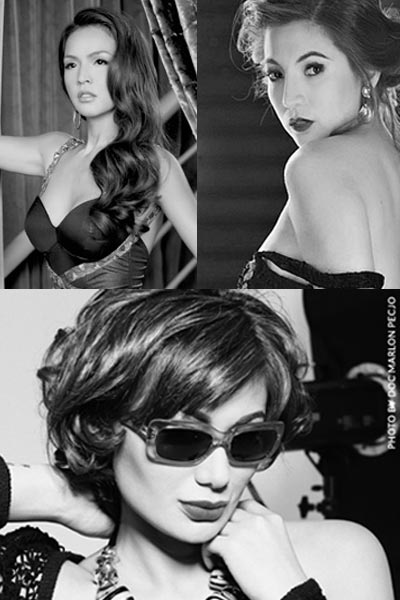 What does it take to become an FHM Babe?

“We should say being sexy, but that’s just the tip of it.

“An FHM babe should really be confident of herself first, because it really does show in the pictures.

“We’ve had many FHM babes who are not that 'gifted' in the physical assets, but the way they work with the camera more than makes up for it.

"And they come out really beautiful.”

PEP.ph (Philippine Entertainment Portal) lists down the FHM Babes and FHM Icons who, at one time or another, became the crush or pantasya ng bayan.

THE BABES. A number of celebrities posed for the men's magazine to redefine their career from “wholesome” to “mature” or solidify their status as a sex symbol.

Having had four covers with FHM, Rufa Mae Quinto’s title as “sexy comedienne” has been akin to her name.

But the actress admitted in her September 2013 interview that the tag never bothered her.

She told FHM, “Bakit kailangan may sexy attached to it? I just don’t know the answer but I really don’t mind.

“Thank you. I appreciate it. I just want to continue improving myself.”

Her first cover was in 2001, and she was mostly favored to play the “dumb blonde” characters in comedies.

Embracing her humor as her appeal, Rufa has continued to take on comedic roles in television and movies.

Iwa Moto has been scrutinized for her erratic behaviour in the past.

When FHM offered her to be on its cover, she took the opportunity, and embraced her tag as a “bad girl.”

And that she did.

Reminiscent of the career of fellow FHM Babe and StarStruck alumna, Katrina Halili, Iwa became one of the favored Kapuso actresses to take on antagonist roles.

She also landed the role of Valentina in the 2010 remake of Darna with three-time Sexiest of the World, Marian Rivera.

Since her debut cover on the December 2010 issue, Ellen Adarna became one of today’s modern sex symbols.

But Ellen showed that she is more than a sex symbol by sharing how she keeps her body toned through workout videos.

She currently stars in Pasion de Amor as Sari on ABS-CBN, and stands at Top 3 on FHM’s 100 Sexiest of the World 2015.

Allan set Jennylyn as the prime example why the men’s magazine is a material “for men” and “about men,” but “should celebrate women.”

He said, “We empower them by celebrating their womanhood. The best example of this would be Jennylyn Mercado becoming the Sexiest Woman of the 100 Sexiest List 2015.

"For our readers to choose her to be the sexiest means that they recognize that being sexy is not just superficial, but it’s really seeing the essence of being a woman.

“Jennylyn herself was very thankful that a single mom like her would be chosen as the country’s sexiest.

Jennylyn debuted on the cover of the January 2008 issue. It was the same month her sudden pregnancy made headlines.

Fast forward to 2015, she's now one of GMA's top leading ladies, not to mention, a multi-awarded actress.

Her performances in Blue Moon, Rhodora X, and English Only, Please earned her citations from The PEP List, Gawad Tanglaw, and Metro Manila Film Festival.

THE ICONS. Then there are celebrities who posed and went on to become the country’s timeless sex goddesses.

Katrina Halili—who, according to Allan had "four covers, two calendars" and was the first "back-to-back Sexiest of the World"—is one of them.

For being called as one of FHM Icons, Katrina said she feels "humbled and happy."

The youngest in the list is Diana Zubiri, who had a controversial debut cover that was shot on EDSA-Shaw flyover with her wearing a red bikini.

The same year the controversy happened (it was 2002), she topped the 100 Sexiest in the World.

Diana was mostly known for her adult films when she debuted on FHM. Thereafter, she made her way into mainstream through when she signed in with GMA.

Her most remarkable role on TV was in the telefantasya, Encantadia, where she played Sang’gre Danaya.

She never left the 100 Sexiest of the World list since her debut.

This year, she placed 19th.

Francine Prieto started out as a teen member in That’s Entertainment.

She was able to penetrate into the entertainment scene with her debut FHM cover on November 2003.

She went on to do sexy roles with Diana Zubiri in Seiko Films and eventually landed her breakout TV role on GMA-7’s Etheria as Queen Avria.

She now works as an actress, model, and radio DJ.

Her recent TV project was with ABS-CBN’s Flordeliza, where she played Grace Magtanggol.

FHM chose her as one of their “favorite iconic cover women.”

She started in showbiz at the age of 14 by playing the role of Brigette in the 1996 soap Anna Karenina.

In 2002, Maui, barely 20 years old, debuted on FHM. That signaled her change of image from pa-tweetums girl to an up and coming sex goddess.

That same year, she got her first starring role in Gamitan, which was followed by a string of sexy-themed movies.

She was recently seen on the South Korean film, The Taste of Money.

A proud mother of two boys, Aubrey Miles told FHM that being a mother makes her sexier.

“You know what’s weird? Having kids made me sexier.

“Walking in the mall with two kids, wearing my shorts and my tank top, proud ako ngayon to be honest. Not to be mayabang. It’s up to you talaga.

She started off with Regal Films and starred in the film, Prosti. It was the same year she debuted on the cover of FHM.

In the following years, she repeatedly graced the cover of the said men's magazine.

Aubrey remarked, “Every time they call me, anything, I’ll say yes. Walang question.

“Before pa nga ng shoot, 'Can I announce it? Can I tweet it?'

She resumed her acting career this year via ABS CBN’s Pasion de Amor.

DREAM COVERS. Did you know that it took years for FHM to get some of their cover girls to say yes?

Eula Valdes was 38 when she had her first cover on the men’s magazine’s May 2006 issue.

“I already posed for a body calendar two years ago. I didn’t get any violent reactions.

Meanwhile, since Marian Rivera became a primetime leading lady, there had been a clamor for her to become an FHM covergirl.

On the magazine's 150th cover special, FHM capitalized on its milestone by granting the wish of its readers.

It was a five-year courtship, and Marian eventually appeared on the January 2013 issue.

She told the magazine, “I admit, it took me a long time to say yes to FHM pero this time kasi nag-swak na ang gusto kong mangyari sa gusto niyong mangyari so everything fell into place.

“I guess it’s a sign na worth it yung paghihintay nang matagal dahil sobrang ganda nung konsepto and it’s also what I wanted.”

Other dream covers for the magazine?

“And more important, we’ll have to wait when they’re ready—which could be a very long time!”

The FHM Bro Con and victory party for the 100 Sexiest of the World 2015 will be on July 11, Saturday, at the SMX Convention Center.