Tessa Prieto-Valdes on whirlwind romance with husband Dennis: "Most of the time it doesn’t work, but you know, 21 years and here we are.” 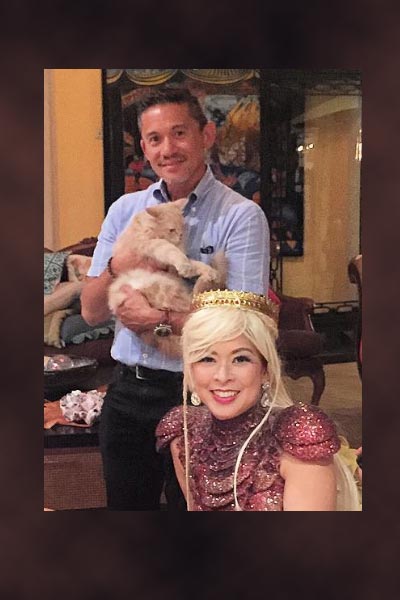 Tessa Prieto-Valdes wears a Game of Thrones-inspired gown designed by Philipp Tampus. Behind him is her husband Dennis Valdes.

Staying married for 21 years of marriage is no small feat.

But for socialite Tessa Prieto-Valdes, it has been a breeze.

In a world that is as crazy as hers, Tessa has a simple explanation: she married the right man.

They both love the movies, we discovered when PEP.ph (Philippine Entertainment Portal) sat down with Tessa for a chat.

It was no surprise then that they held a movie-themed costume party for their wedding anniversary.

Her costume for the night was a Games of Thrones-inspired gown designed by Philip Tampus from Cebu.

For entertainment, Dennis and Tessa feted their friends with 21 of their favorite films courtesy of HOOQ, an online library of local and international TV series and films with over 30,000 titles in its catalog.

It turned out, Tessa is the brand ambassador of HOOQ.

“Yes. Actually, it’s funny when they asked me to be the ambassador.

“I don’t sleep in the plane so I can watch movies,” she related.

But when does she ever get to sleep? A popular life-of-the-party, Tessa does not seem stifled by marriage.

On the contrary, she said her “demand” for life continually “escalates.”

“Parang, you know how, because I’m really a crack.

“I mean, I really joke around and I’m like laughing all the time.

“It’s hard to keep up with me, but he does!” she declared, pointing to her husband.

HER KIND OF FUNNY. In Tessa’s own words, the first time she met Dennis, he was “super boring and intelligent na ‘yong straightforward, and super blah, and stuff like that.”

But Dennis surprised her when it turned out, he was “actually kinda funnier than I expected him to be.”

As she described him, “I mean, he’s like so witty. I mean, you know how some people are… he’s very intelligent kasi, e.

“I mean, like I’m normally the most talkative and everything...
but when he talks, he’s like, he’s actually funny.

“So you know, like for example, it’s just a small thing.

“You know I went to Singapore, ah, Bangkok, we were invited for the… it was like a shopping challenge and stuff like that.

“And then, you know, he was like, ‘Oh you’re there for the SEA games, so shopping!’ mga ganyan.

She began, “You know, he came at a time when I was also in another relationship, and so it’s like…

“It was perfectly-timed when we met and we fell in love, and we got married in six months.

“So, it was one of those whirlwind relationships, you know how it is, most of the time it doesn’t work.

Being a film buff, Tessa was asked what movie would come closest to their love story.

Tessa took her time thinking about it.

When her answer came, it was a humdinger.

“Yeah, well, it’s really more, like umm, I think we’re more of a National Geographic because we love the sea!

“We love diving, we love, you know, I’m the Sea Princess.

“So, you know, anything that has to do with, ‘di naman parang Orca the movie or whatever.

“But something that has to do with, you know… maybe Blue Lagoon?

“Well, Dennis is also the pirate, that’s his code name, so I’m the Sea Princess and he’s the pirate.

“So our movie is always like, ahh, Pirates of the Carribean.”

TIMING. If the Tessa now will meet the Dennis now, will it be a whirlwind romance all over again?

Her frank reply, “Maybe I would have found somebody else.

“I really feel that in a relationship, everything is timing, destiny

“And, you know, it’s like someone, someone is out there meant for you.

“Maybe if I had met Dennis later, it wouldn’t have been him.”

After 21 years of being married to Dennis, what still surprises Tessa about him?

“That he snores? No, I was kidding!

“I realize he’s very patient, parang, as I evolve, I mean I wasn’t like this na dressed up 20 years ago.

“I mean I was, but not too much… talagang I have escalated na to the over levels.

“I think he’s just so wonderful to just really adjust and, you know, keep up with me.

THE MOVIES. Back to their favorite pasttime, the movies, Tessa said her taste in films ranges from the Best Pictures of Oscar to popcorn flicks to movie franchises like Hunger Games, which has a character that resembles her out-of-this-world fashion statements.

“But me naman, you know, I’m in for costumes, you know, and so mga Hunger Games, of course!” she said.

“In fact, they were saying nga, ‘Oh my god, you’re [like Effie Trinket]’ yeah!

“To think I was, like, ahead of her, you know what I mean?

“It’s not like, you know, I’m like way, way, way ahead of this girl in Hunger Games!”

In naming movie that resembles her life, Tessa gave it a thought, then blurted, “Confessions of a Shopaholic!”

She laughed, “I like, I wanna admit it na because I feel so babaw, but that’s who I am!

“And, ironically, I haven’t seen it, so that’s the first thing I am going to download in my new HOOQ account... everyone’s like, ‘See it, Tessa, it’s so you!’

“And of course, I love, umm, I love Pride and Prejudice.

“I think that, for me, aww, it’s like so romantic and, you know, parang…

“The whole, umm, Games of Thrones sort of movie.

“I hope they make a movie, I don’t know how, but you know, if that’s gonna be a movie, that would depict my life, you know.

“I love all movies except horror. I cannot watch horror until today.

“I don’t know if I had a traumatic experience watching horror, but any other film, I’m okay.

“You know, it’s like, I love sci-fi movies, you know, 3G [3D] and all these animations, technology…

“I love movies that are, like, medieval times. I mean exactly what Game of Thrones is, but in a movie.

“Like Shakespeare in Love is my favorite movie, mga ganyan.”