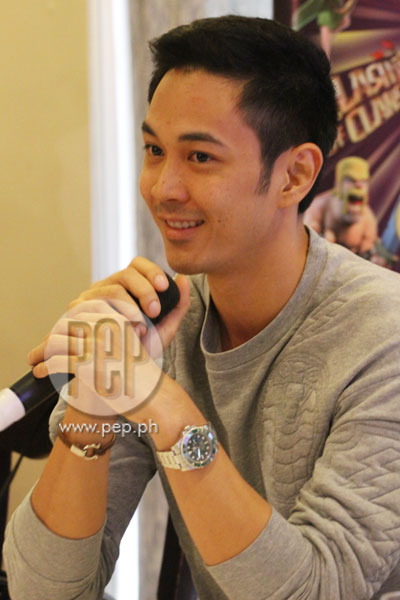 It's been a while since the last time we saw Slater Young, the big winner of Pinoy Big Brother in 2012.

PEP.ph (Philippine Entertainment Portal) had the chance to talk to him tt the press conference of his new endorsement for Globe Telecom broadband brand Tattoo—which, by the way, has a GoSURF50 promo which comes with free access to top mobile games such as Clash of Clans.

"And also in this business, we come up with the new technology that's gonna make our houses greener and cheaper to build so I’m very excited for that also.”

Klik is a dating app.

Says Slater, “It’s open for all. For all genders, mapa male-female, male-male, or female-female.”

He resumes,“Yung KLIK is existing ngayon sa IOS but we’re revamping it. We’re doing a 2.0, it’s gonna include adroid na, and it’s gonna be a lot better.

"Sa dating kasi, we tend to match people that we are not sure kung sila ba talaga yung nasa picture na ini-upload nila or they are just a poser, or is it latest, or filtered or edited.

LGBT. Since Slater mentioned that his app allows male to male and female to female dating, what's his stand on same-sex marriage?

Has he experienced receiving an indecent proposal from a gay?

STATUS. Is he taken or single?

“Yes, I have a girlfriend now in showbiz, she is a non-showbiz, and I believe she wants to keep it in private na lang muna.”

What he likes about his present girlfriends is "maalaga siya."

It also helps that they belong to the same circuit.

"I think it’s because we are on the same group of friends sa Cebu. We tend to get along better.”

When asked if he prefers dating a non-showbiz girl, he says yes.

His last publicized relationship was with Rachelle Ann Go. It lasted for three months.

“I think the main reason is long distance relationship talaga.

Back to his more "private" relationship, he is happy that things are more manageable.

TRUE CALLING. He mentions that showbiz will just be his "sideline," why?

He admits to still getting offers from the Kapamilya network.

"I keep on getting offers pa rin from ABS-CBN, although not quite as much as noong active pa talaga ako.

"Meron pa rin but I have to decide to concentrate on my entrepreneurship.”

Will he be coming back? His fans will miss him.

But he welcomes endorsements, like his current partnership with Globe.

“Feeling ko bumagay din talaga to my line of work and what they're trying to promote,"

Lastly, since he is a PBB alumnus, what can he say about the present edition?

"But we try to protect that identity, how we see ourselves.

"It shows more that they are excited. I’m happy for the casting ngayon. Lalo na si Bailey [Thomas May] at si Ryan [Bacalla] na taga-Cebu.