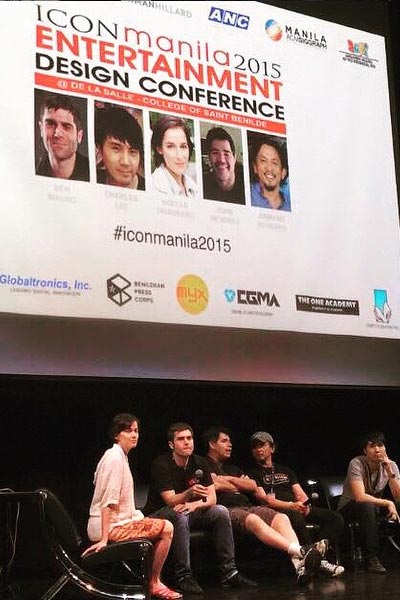 It has been said and heard how the arts is a hit-or-miss kind of career.

Television introduces us to different faces every season and only a few names have managed to stick around to become part of the Pinoy households.

Singers get their chances to record an album, but only a few get to perform on their own stage.

Artists—painters, designers, graphic, and multimedia artists—walk the same line, and the second ICON Manila International Entertainment and Design Conference acknowledges the struggles of an artist, but continues to encourage young artists to pursue their artistic passions.

This year, it brings its workshops closer to the students by facilitating the two-day event at the De La Salle College of Saint Benilde.

Armand Serrano, the head organizer of this project, introduces more of his fellow animators in the industry.

For Day One, Environment and Character Designer from Monsters University and Cars 2, John Nevarez, and Game Cinematics Concept Designer of World of Warcraft, Charles Lee give their talks about design for environment and characters and presented their work portfolio.

ALL ABOUT LEARNING. Armand, John, and Charles speak fondly of their lives as animators and answered young animators’ queries about their work, lifestyle, and passion.

PEP.ph (Philippine Entertainment Portal) take notes, and these are the six life lessons for those passionate about the arts:

Armand recalls a time when one of his senior co-animators approached him, stressed, and told him, “We’re making cartoons!”

Whether it is conceptualizing a character, writing a novel or internalizing for a role, the whole point of the process is to “have fun, enjoy what you are doing.”

Armand says when he was working on the concept art of his latest work from Big Hero 6.

John and his dream of becoming an animator began at the age of 25.

He had his eyes on Walt Disney Studios like most animators did, and it took him years of rejection to be finally part of the studio at the age of 31.

His motivation was a piece of paper in front of his desk with the words “How bad do you want it?” written on it.

As a Walt Disney animator, he “learned on the job” and learned how “to tell stories through pictures.” He stayed “hungry to learn.”

John relates, “ Got your foot on the door, do what you can and keep it.”

“If a country goes to war, then the people, they have a different experience than the country was so prosperous.

Armand is a Civil Engineering graduate from University of Santos Tomas.

The moment he entered Hanna Barbara and began to be part of the world of animation, the rest is history.

He says, “The first time I stepped into animation, I said, ‘Aw yeah, I’m leaving Engineering.’

“And this is what I want to do.

“Because for one, I know my capacity and I know I can do it.”

Many of the students are worried about starting their career as artists and Armand stresses to them, “Only a few people can do what you do!

“Put value in what you do.”

6. “Passion Is An Entire Lifetime”

Passion is not a constant stream of motivation. It does come in waves, but the passion doesn’t fade away.

Armand admits that being “passionate” goes with the thought of “gotta pay the bills,” but Charles reminds the students that “discipline and consistency” is also what keeps you “on top of your game.”