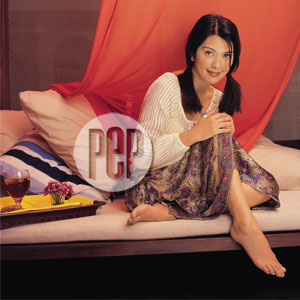 Martin Nievera once gave what probably still stands as the most flattering description of Pops. He said: "She has been and always will be an inspiration to us all. A chameleon when it comes to blending in and standing out at the same time. She's a master of trades and an awesome friend when you need one. I said it once, I'll say it again... my greatest find was my greatest loss. That's Pops!"

Very few work as hard as Pops or keep as busy or stay as fit or take their image more seriously. The woman is tireless, energized and, little wonder, successful.

"Somehow, when you're in the business, it seems like there's still so much to accomplish," is how she puts it. "Perfecting your craft seems almost impossible since, as my own critic, I feel I can always do better. There is also the fact that you want to grow with the times, so you constantly have to adjust and make changes."

And how she changes! From her look to the movie roles she chooses to do, from her choice of songs to the manner in which she performs them. Gone forever is that shy, average-looking girl who could sing. Here to stay, it seems, is the striking diva who, for years, packed them in by the thousands.

Of all the changes she has ever engineered, however, her going solo has to be the biggest. It is also, from the looks of it, the most total. Pops makes it clear that the one subject she will no longer say anything about is Martin Nievera, the husband from whom she was granted an annulment six years ago.

After the separation, all Pops wants now is to be able to maintain a disposition that will get her through her new life.

"I believe that there are things in life that have to happen, unexpectedly," she says seriously. "This is so that we'll learn more lessons, so we can grow more and learn how to deal with other situations. Sometimes these learning experiences are very painful, but once you overcome them, it feels like you have graduated and are living a new life. Along the way, you will realize that there's more meaning to life. Everyone you meet will touch your life, whether that person becomes important in your life or just a mere acquaintance. You'll also realize that forgiveness is important if you want to move on with your life."

What she allows herself room for is talk about her children Robin, 20, and Ram, 18. All else, she says, fail in comparison. Pops' own friends confirm that the praise the singer truly cherishes is that which speaks of her as a good mother. She believes Robin and Ram, just being themselves, prove she's done her job well.

"They are really a blessing," she beams. "As they grow up, I learn from them, too. Like, now that they're older, we talk to each other like friends. But there is a lot of respect for each other and they don't cross the line as far as the mother-and-son relationship. But I think it's so cool to be able to express how you really feel and they can understand... sometimes even give their own opinion."