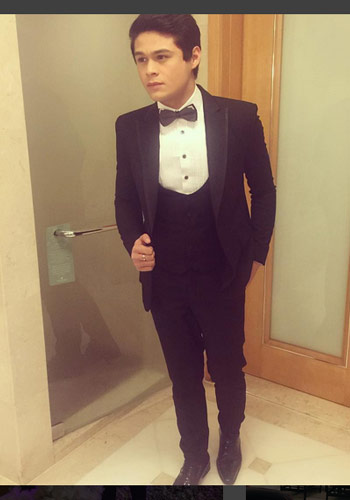 Nineteen-year-old Jon Lucas is ready to reveal something new about himself.

From his stint on Luv U, Home Sweetie Home, Be Careful With My Heart, Sana Bukas Pa Ang Kahapon, Kahit Konting Pagtingin and Got to Believe, Jon thinks he’s ready to move on from playing best-friend roles.

Of course, he knows this will come with a lot of hard work.

And he knows he needs to show people, especially his management in ABS-CBN where he’s part of Star Magic Circle 2013, what else he can do.

Some members of his Star Circle batch, including Janella Salvador, Julia Barretto, and Liza Soberano, have already gotten their big breaks.

HARNESSING HIS MUSICAL TALENT. Jon believes it’s his musical talent that will make him stand out.

Have you heard him sing?

In 2013, he sang a la Gary Valenciano when he and his Star Magic batchmates appeared on PEPtalk.

He doesn't have a record label yet, but he's determined to make this happen soon.

He hasn’t written any songs, but that, according to Jon, is something he wants to try as well.

FANS. One thing’s sure. Online videos from his mall tours, debuts and parties show that girls scream Jon's name when he sings or dances.

FOCUS ON RAP. When did he get interested in rap music?

But Jon didn't pursue college studies anymore since he wanted to chase his showbiz dreams.

Back in high school, he would win emcee battles and challenges.

Loonie, a protege of the country's top rapper Francis Magalona, Andrew E, Gloc 9 and American rap superstar Eminem are among the rap artists Jon looks up to.