Vilma Santos shares the highs and lows of her storied life with YES! 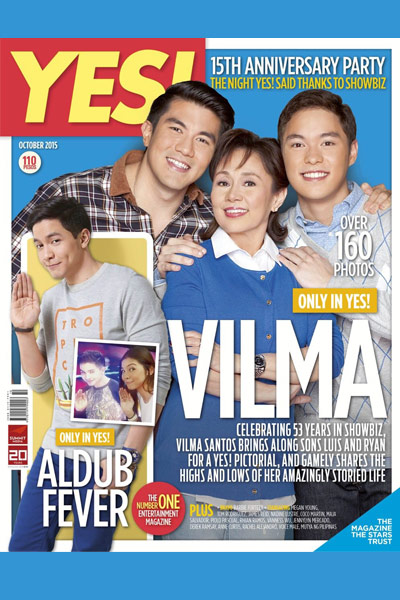 YES! magazine's October issue details the life of Vilma Santos, catches the AlDub fever, and features the complete coverage of the star-studded party that marked the 15th anniversary of the number one entertainment magazine.

If you have spent 53 years in showbiz, there are plenty of stories to tell.

As amazing and celebrated are those stories is the star of the narratives herself, Ms. Vilma Santos.

This October, YES! magazine details the colorful life of the 62-year-old Star for All Seasons with an exclusive pictorial with her sons Luis Manzano and Ryan Recto. 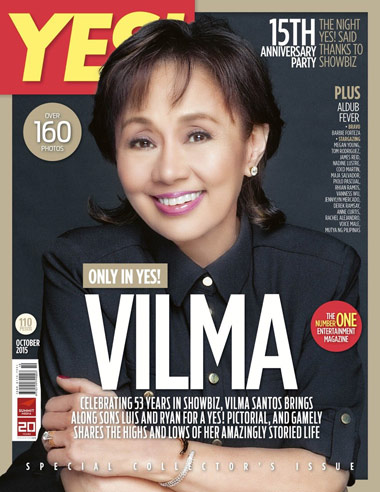 Vilma revisits her childhood—before, during, and after she made her big screen debut in Trudis Liit at the age of nine.

“May papili-Pilita Corrales pa ako,” she says, recalling how she imitated the Asia’s Queen of Songs.

The movie icon also talks about her real and reel love team with Edgar “Bot” Mortiz in the '70s and their rivalry with another big teen tandem, Nora “Guy”Aunor and Tirso “Pip” Cruz III.

Before Bot, she had ”boypren-boyprenan” at age 13.

And her first love could have been one of her schoolmates at an all-girls high school.

Vilma also looks back at some crucial moments in her life, when she hit rock bottom as a result of “mismanagement” of her earnings and how that pushed her to become “rebellious.”

But like the proverbial phoenix rising from the ashes, she emerged from it triumphant as a box-office star and, later, as a successful public servant—first as mayor of Lipa City and then as governor of Batangas.

Vilma also shares her memorable and learning experiences as an actress.

She nearly backed out of the critically acclaimed Burlesk Queen (1977) because she felt she couldn’t do the pivotal dance sequence.

And only when she was already a public servant did she appreciate the value of Sister Stella L (1984).

She admits coming close to being swallowed by the trappings of stardom.

She relates how the late director Ishmael Bernal snatched her back to reality when he reprimanded her for muddling a scene right in Broken Marriage (1983).

The ruckus with the esteemed director, according to her, jolted her back to her humble self.

Vilma makes it clear in her YES! interview that she’s a simple person with very ordinary likes and “hindi mapaghanap.”

ALDUB PHENOMENON. Also in the October issue is a special feature on the phenomenal tandem of Kapuso heartthrob Alden Richards and Internet sensation Maine “Yaya Dub” Mendoza, known by their portmanteau name AlDub.

The feature traces how the love team started and how it drives the whole AlDub nation crazy with kilig.

It also showcases an enviable collection of their childhood and pre-love team photos that will surely make the fans fall in love more with the duo.

Alden, for one, is guided by the values of his family, particularly his grandparents.

“I want to make a personal connection with the people that I get to work with.”

In fact, Alden, known as the Pambansang Bae, turns down any kind of special treatment.

“I don’t want any of those things, hindi ako Diyos.

“For as long as everybody is treated fairly, okey ako.

"Only if the situation calls for it, na ako ’yong nadedehado, do’n lang ako magre-react.”

Another special feature in the October issue is the complete coverage of the star-studded YES! party that marked its 15th anniversary.

YES! magazine October 2015 issue is now available in stands and soon on Buqo, Zinio, and Apple Newsstand. For digital subscriptions, CLICK THIS LINK.