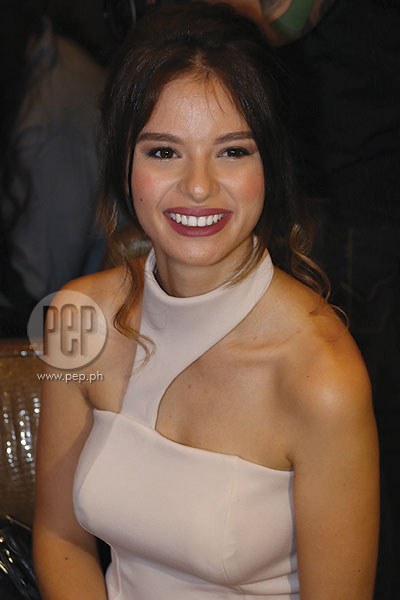 Given the chance, Valerie Weigmann is willing to go back to Eat Bulaga!'s segment, “Juan For All, All For Juan,” She says, "Oo naman. I’m always there naman for them and they know it.”

Before she represented the country in the 2014 Miss World Pageant in London, Valerie Weigmann was a popular mainstay of Eat Bulaga!'s “All For Juan, Juan For All” segment.

Now that she's relinquishing her crown to the 2015 Miss World Philippines titleholder on Thursday, October 15, at Solaire Resort and Casino in Parañaque City, Valerie believes that the end of her reign is just the beginning of a new journey.

She has yet to determine what she will do next, but that is what makes her journey all the more exciting to her.

BACK TO SHOWBIZ? Is she willing to go back to showbiz?

The model turned beauty queen answered, “Right now, I have to see how everything goes, kasi siyempre I had to stop for a long while. But for sure, if there are good opportunities coming up, why not?”

“I’m really, really happy for their success, because I worked with them, and I know how much they want to come to that point when everyone is still talking about them, that they are still there after 35 years. I mean it’s amazing already.

“I’m happy for the whole staff, for the hosts of Eat Bulaga!, and it’s really great to see them there.”

Not only did the noontime show boost Valerie’s popularity, it also paved the way to Miss World Philippines, her first-ever beauty pageant.

KEY TO MISS WORLD. She became extremely close to her co-hosts in “Juan For All, All for Juan,” particularly to Paolo Ballesteros.

It was Paolo who aggressively urged Valerie to try her luck in the prestigious local beauty pageant.

More than a year since she left the show, Valerie admits missing Bulaga!

“Oo naman! Nami-miss ko silang lahat kasi I was with them every day. They were like my second family, and I can’t wait to meet Yaya Dub,” she said, referring to Maine Mendoza, the other half of the AlDub team (the other half being Alden Richards).

Given the chance, Valerie is willing to return to Eat Bulaga!

“Oo naman. I’m always there naman for them and they know it.”

NEXT MISS WORLD PHILIPPINES. Meanwhile, Valerie described the qualities she would like to see in in the next Filipina who will represent the country in the 2015 Miss World Pageant this December in Sanya, China.

“It’s not every day you join a pageant, and I know there’s always pressure because people are expecting you to be someone like the past winners from before. But I’m always telling the girls, ‘Be who you are,’” Valerie said.

She also recalled what Julia Morley, chair of the Miss World Organization once told her.

“Miss Julia Morley always wants to look for the girl who really shows who she is. I’m always telling that to the girls,” Valerie revealed.