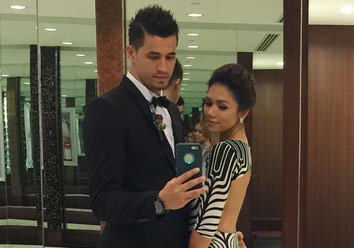 On Instagram, Marc Pingris accompanied this photo of him and wife Danica Sotto with this caption: "My love! My queen! ðŸ’˜ i love you so much!!!ðŸ˜˜"

The 2015 ASIA FIBA Championship may be over, but for Gilas Pilipinas star player Marc Pingris, the fight continues!

The Philippines’ silver-medal finish would relegate the national team to the FIBA Olympic Qualifying Tournament in July 2016.

The brand endorser expressed his gratitude to the Filipinos for their overwhelming support during their games.

Despite the Philippines’ loss to China, Gilas Pilipinas earned the admiration and respect of the basketball fans around the globe.

Pinoy Sakuragi (his moniker) stood tall and proud of their runner-up finish in the finals last October 3.

DUTERTE SUPPORTER. On top of PBA games, Marc—alongside his co-endorser Davao City Mayor Rodrigo Duterte—will be busy with the activities lined up for his new endorsement.

Duterte failed to attend the event due to a previous commitment. Earlier today, October 15, he filed his Certificate of Candidacy for the post of mayor in Davao City.

Mark made it obvious he wanted Duterte to run for higher office.

NEXT TRIP. Meanwhile, Marc is looking forward to spending more time with his family.

Their last vacation abroad was in Paris, where they stayed with Mark’s family. That was in August.

This time, they are eyeing Japan as their next destination, possibly, this coming Holiday season. Would their next baby be “made in Japan”?

They have two kids—son Jean Michael and daughter Anielle Micaela.

VIC-PAULEEN WEDDING. When asked about the upcoming Vic Sotto-Pauline Luna wedding next year, Mark chose not to comment.

Instead, he prodded Danica, who came just in time to answer the question.

“Aray ko naman!” said a smiling Danica, with their two kids in tow.