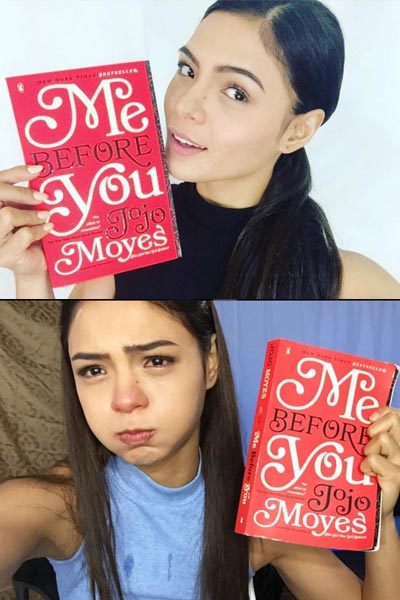 Lovi Poe was so affected by Jojo Moyes's book Me Before You that she cried #HagulgolLevel.

When celebrities find the time to relax, some of them choose to read.

Cosmo.ph and StyleBible.ph featured the libraries of Anne Curtis and Nikki Gil on Instagram.

Now, PEP.ph (Philippine Entertainment Portal) browses through the photo-sharing site Instagram to find more celebrity bookworms, and check out what they're reading.

Here are 15 books to delight your imagination:

The award-winning actress sneaks in a good read in between shoots.

If she falls in love with the story, she can finish it in a day or two.

The dusky actress is now reading Gayle Forman's Where She Went, sequel to the book-turned-movie If I Stay.

This actor has a knack for poetry. He writes some himself, and Lang Leav seems to be one of his influences.

This dramatic actor reads books such as Actors Annoymous, which he brought with him when he went to Hong Kong.

An autobiograhy and biography of Hollywood actor James Franco, it presents the intense life of a celebrity through the eyes of different actor-characters, the author included.

The Kapamilya actor loses himself in author Sun Tzu's military tactics in the Art of War.

The most influencial book on military strategy states, "If the words of command are not clear and distinct, if orders are not thoroughly understood, then the general is to blame.

"But if his orders are clear, and the soldiers nevertheless disobey, then it is the fault of their officers."

This mom-to-be relaxes with Liane Moriarty's What Alice Forgot, which is about a 29-year-old who's head over heels in love with her husband and pregnant with their first child.

The twist is that Alice is already 39, has three kids, is getting a divorce, and lying on a hospital bed wondering whatever happened to her the past decade.

The book is about Rachel Chu, who is set to wed Asia's most eligable bachelor, Nicholas Young (no relation to Megan and Lauren).

Rachel is devastated upon learning that her father can't walk her down the aisle.

As her wedding nears, the crazy, high-class world she lives in reveals that Rachel's father is alive.

On the shelf: (From the top) The Prayer of Jabez by Bruce Wilkinson, Mindset by Carol S. Dweck Ph.D, and The Perks of Being A Wallflower by Stephen Chbosky.

Heart delights herself in books while leisurely enjoying her coffee.

The Prayer of Jabez reminds the Kapuso actress that God is set to give us bountiful blessings, while Mindset is about the best dispositions to become even more successful.

Heart also finds pleasure in reading The Perks of Being a Wallflower, which tells the modern coming-of-age story of Charlie, an introverted teenager who uses letters to talk about his experiences.

On the shelf: (L-R) Catcher in the Rye by J.D. Salinger; Catch 22 by Joseph Heller; The Alchemist by Paulo Coelho; The Great Gatsby by F. Scott Fitzgerald; The Old Man and The Sea by Ernest Hemingway, and The Picture of Dorian Gray by Oscar Wilde.

Catcher in the Rye introduces us to cynical adolescent Holden Caulfield.

We meet the shepherd boy Santiago in The Alchemist.

Catch 22 is a celebrated story about Yossarian, a hero burdened by the bureaucratic Catch-22 rule.

The Great Gatsby, F.Scott Fitzgerald's best-known work, is about millionaire Jay Gatsby, while Oscar Wilde's The Picture of Dorian Gray focuses on a man who doesn't age physically, but whose portrait tells an entirely different story.

The Old Man and The Sea, on the other hand, Ernest Hemingway's last published book, tells the story of an aging fisherman.