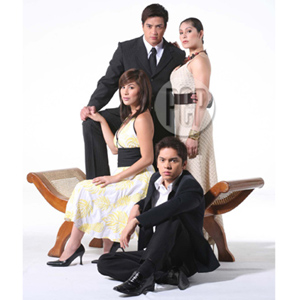 The main cast members of the TV remake of Sinasamba Kita are heavily promoting the first offering of the TV serialization project of GMA-7.

PEP (Philippine Entertainment Portal) asked Carlo to describe his role in this TV remake, which is based on the 1982 film directed by Eddie Garcia.

The four cast members were in a hurry since they still had to go to SM Fairview that night to hold a mall show for their fans.

OPENING SALVO. After producing top-rating komiks-based television programs in the primetime block such as Darna, Captain Barbell and Bakekang, GMA-7 rekindles the immortal lines and unforgettable characters of timeless Filipino movies that will further capture the viewers' interest. For the first salvo of its TV serialization project, The Kapuso network premieres its movie-turned-television series entitled Sinasamba Kita.


This drama series, directed by Joel Lamangan, is a compelling story of two half-sisters whose entwined loves and lives change when true love and destiny intervene.

Sheryl will give life to the character of rich and self-centered Divina who was then played by Vilma Santos in the original film. Valerie plays a challenging role as the poor, half-sister of Divina named Nora, portrayed in the movie by Lorna Tolentino. Wendell Ramos stars as Jerry, the two sisters' love interest whose character was given life in the movie by Christopher de Leon. Meanwhile, Carlo will play Philip Salvador's character Oscar, the persistent suitor of Nora.

Divina takes her half-sister, Nora from her mom Corazon to live with her in the mansion. However, Divina's mom, Sylvia (Jackie Lou) and her aunt Isabellita (Bing) will connive to make Nora's life miserable.

After several years, Nora is now a nursing student. Her childhood friend Oscar (Carlo) secretly adores the young lady. Meanwhile, Divina who runs the family business, is in love and even worships one of her trusted personnel, Jerry (Wendell).

But destiny leads Jerry and Nora to meet when the two get stranded in a remote place and later fall in love. Things get complicated when Jerry visits the mansion and finds out that Nora, the woman he loves, is the half-sister of his boss, Divina.

Will Jerry be able to bring back Nora in his arms now that he has a relationship with Divina? What are the drastic schemes that Divina will use against her sister just to make the man she worships love her? Will Oscar find a space in Nora's heart? And when will Nora start loving herself and stop worshipping Divina whose real identity remains hidden in the dark?

Ogie Alcasid performs the newest version of the Sinasamba Kita theme song, which was originally popularized by balladeer Rey Valera and the Megastar Sharon Cuneta.

Sinasamba Kita will hit the airwaves on April 30 as part of GMA-7's Dramarama sa Hapon, right after Muli.

With reports from Frances Mendiola