"Lino's Girls" are cover girls for the month of May 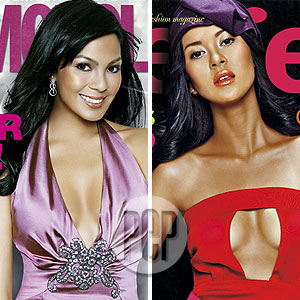 KC Concepcion speaks up about her rumored romance, while Bianca briefly talks about her recent break-up. Both girls have been linked to TV director Lino Cayetano, and they are also the May cover girls of Cosmopolitan and Preview magazines, respectively.

TV Director Lino Cayetano may have a tough time choosing which women's magazine to favor this month, as two women who have been linked to his name grace the covers this May.

For Preview magazine, the country's style bible, TV host Bianca Gonzalez graces their cover in a black, bold, and beautiful cover. Bianca is transformed into modern interpretations of Philippine cinema's most iconic beauties: from Paraluman, Gloria Diaz, Charito Solis, and even Vilma Santos as Darna— Bianca is truly transformed in every page.

The Bianca-Lino romance underwent a major strain during Bianca's stay at Pinoy Big Brother's house, the aftermath of which was something that she simply had to live with.

It will be recalled that in February 2006, Bianca and one of Kuya's housemates Zanjoe Marudo—they're popularly known as "Bianjoe"—were rumored to have had some sort of an affair while they were at the PBB house. When Bianca finished her stint with PBB, she denied that something special transpired between her and Zanjoe.

In April 2006, Bianca and Lino were spotted in Boracay. But some months later, they called it quits. None of them disclosed the real reason of their break-up.

When Lino recently told her about his current squeeze, Bianca admits to a crying spell. "Who wouldn't cry naman when you find out that someone who was part of your life is going on with his?" she says, pointing out that anyone in a similar situation would surely care.

Indeed, Lino has moved on from his break-up with Bianca, and is now rumored to be seeing KC Concepcion, cover girl for the anniversary issue of Cosmopolitan magazine. When Cosmo asked KC about the romance that made showbiz go to town, she reveals that she regards Lino as someone she learns from.


Perhaps it is too early to truly define their relationship, but there's an undeniable fondness in KC's voice as she talks about him. When the subject of long-distance love comes up, KC says, "If you really want it to happen, it you're two people who're both faithful and have the right principles, [then] there's no reason why it shouldn't work."

Find out more about both Bianca and KC by grabbing your copy of the May issues of Preview and Cosmopolitan, now available in all leading bookstores and magazine stands nationwide.