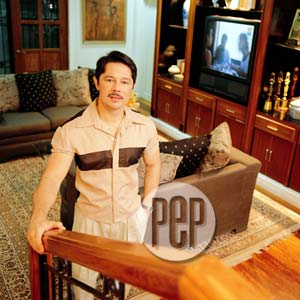 The den is furnished with two two-seater sofas, a study desk, the floor-to-ceiling shelves filled with acting trophies (arranged according to award-giving body), books, and a 37-inch Sony TV. Two FAP (Film Academy of the Philippines) trophies double as bookends. (YES! March 2002 issue)

What he is now is totally the opposite of what he used to be as a teenager. "Introvert ako noon," says the 45-year-old Boyet, his nickname in the industry. "I rarely socialize. Ngayon na lang ako medyo hindi na ganoon."

But when in the early '70s the late Lino Brocka sent scouts to find actors to play the all-male barkada for Tinimbang Ka, Ngunit Kulang—a tide Boyet digresses to say was lifted from the Bible, Daniel 5:27—the scouts asked Boyet, then tagging along with elder sister Pinky de Leon to her showbiz functions, to audition. Add that to the oft-repeated line about acting running in the blood—Boyet's parents are former major stars Gil de Leon and Lilia Dizon—and Boyet was on his way.

"Then, out of several aspirants, nakuha ako sa apat na magkakabarkada," he says. "Then, namili sila among us who will play Cesar Blanco which is the introducing, male lead role. So, luckily I got the part."

And there began the nearly three-decade, mutually good and generous relationship between Boyet and the TV and film industry. Consistently since, Boyet has landed the good roles, been handled by the country's top directors, earned critical acclaim, and collected acting awards now numbering 30-plus from films alone.

"I thank God for that," says this active member of the Oasis of Love, a Christian community. "I guess I'm really one of the luckier ones. I'm truly blessed."

He also thinks this is just where he'll be till he's old and gray. Which, in the here and now, happens to be where the throne of the Philippines' undisputed "Drama King" rests.

However flattering, the title barely captures Christopher's immense range. He is one of a special few who can shift from romantic leading-man parts to major off­beat, character roles and still be among the top favorites as on-screen partner to the country's biggest female box-office draws.

Take a look at his past films: an agnostic husband and father in the horror-suspense Ika-13 Kapitulo, a wife beater and rapist in the dramatic Bulaklak ng Maynila, and a terrorist in the action-thriller Alas Dose opposite Cesar Montano.

These choices were deliberate. As he puts it, "I've been in the business for 28 years already, so after a while you get tired of playing the same characters. I really wanted to play villain."

But of all the off-beat roles he's ever taken on, perhaps nothing matches the challenge of the present. For he became the sole TV host, thrice weekly, of the then world-famous, London-based game show "Who Wants To Be A Millionaire?"

Boyet admits he wasn't sure he wanted the job at all.

"Sabi ko nga sa 'yo, I'm more of an introvert," he says earnestly. "Kilala ko ang sarili ko. I'm choosy with my friends, I don't socialize so much, and I'm not that articulate. So when they offered me, sabi ko I'll think it over. Give me materials that I can study and I'll let you know. After a week, they asked me if I want to go to London. After that, hindi na ako naka-atras."

But like a true artist and trouper, once he got in, he made himself get the part down just right.

As Viva TV president Veronique del Rosario-Corpus says approvingly, "He was a very fast learner. In his case, nag-training siya, nag-workshop, and he's been very masigasig. Best of all, he took all the past criticisms positively. Now you cannot imagine 'Millionaire' na iba ang gumagawa."

In turn, the show has reinvented Christopher, turning him into an even bigger celebrity than he already was. He knows it, of course.

The biggest perk in fact, he says, is meeting all kinds of people in and out of the "Millionaire" set. "Hindi lang sa taga-entertainment business," he enthuses. "Mas lumawak ang reach ko. Para ngang ano, e, from Tawi-tawi to Jolo to Aparri, marami kang nakikilala. And people appreciate me more now than when I was just an actor."

He guffaws: '"Cause I give money away! But it's not my money. But it still feels good giving it away. Another thing is, they don't call me Christopher anymore. They call me, 'Hey there, Millionaire...who wants to be...final answer!'" Then he guffaws some more while mimicking his public.

But as there are perks, so are mere setbacks. The biggest being that the public thinks him a huge millionaire who's become even richer with a TV salary of P1 million a month!

"I'm not avoiding anything here," he makes it clear. "If it's true, I will tell you right away. I'm being paid a very reasonable talent fee. Phew it's not true yung mga nara-write-up na like a million a month. Wow! How I wish, how I wish!"

He stresses: "I'm not a millionaire! Let's just say I have a comfortable life. But then, you see, I have six kids to support. That's why I'm working so hard."

Still, very Boyet, he goes beyond the call of work. On the set of his top-rating game show, he gets carried away many times, he admits, by the empathy he feels for the hot-seat contestant.

Enough to give away the correct answer?

"Sometimes, yes," he says, thoughtfully. "Like, if the contestant is only at P5,000, tapos wala ng lifeline, parang kailangan naman i-stress ko na 'yung right answer. Parang nakakaawa naman if he goes home with nothing."

But, by his reckoning, his ability to empathize has become part of the "show's charisma."

By "they," he means both contestant and producer. He goes on: "On my computer screen, the producer writes anything he wants to say, like 'contestant is fishing,' 'tell him to use lifeline,' 'more drama,' 'faster'— especially 'offer him the check.' Yun ang pinaka-importanteng dapat kong sundin doon. Kaya kapag nahahalata sa itaas na nanghuhuli ang contestant, hindi ako dapat magpahuli."

Interestingly, the whole game-show genre has, after "Millionaire," spawned its own subculture, the elements of which Boyet is getting to know firsthand.

These people don't cease to amaze him. "They are really smart, they know the tricks!" he says. It's a discovery that gives him as much cause for wonderment as the happy fact that his celebrity contestants can be just as amazing.

"Did you know that Sharon Cuneta won again in 'Game KNB?'" he lights up, referring to Sharon winning P1M there after winning P1M in "Millionaire." He says, "Matalino talagang babae."

With everything going on in his life on-cam, might he be too busy for his wife and six kids, the eldest of whom, Ian, lives in another house in the de Leon compound?

No, he says flatly.

Of his girls, he says, "Si Mariel (7, now 12), she's my princess. When she asks me something, I will do it for her, kahit ano. Siguro because she's the first girl, but then again I had also Lotlot before. Then the bulilit, si Mica (3, now 8), siya 'yung smart, little, funny girl. She makes me laugh all the time. She's just adorable. She has my temperament also."

Last March 27, 2001, Boyet married actress Sandy Andolong a second time, this time around in a simple and solemn church ceremony. They've been married civilly for 21 years. So the romance goes on?

"Well, just the other day, I gave her flowers," grins Boyet.

With a lovely, talented, and dutiful wife who has given him well-behaved and great-looking children, a sprawling, tastefully appointed house in the city and a farm in Zambales, a stable TV and movie career, not to mention having the TV-viewing public as his friends and admirers, Christopher is a millionaire after all.