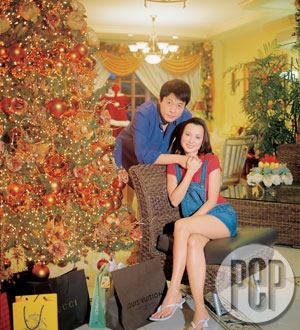 When Chinese businessman Johnny Wong first saw actress Beth Tamayo, he was asked if he found her pretty, and his reply was: "So-so."

It just so happened that the owner of the bar where Beth was to perform was Johnny's kumare. The kumare thought a little matchmaking wouldn't hurt her good friend Johnny, a divorcee and the father of two young boys.

After their first date, the two exchanged phone numbers. But Beth gave Johnny a fair warning: "Even if you ask for my phone number, I still don't think it will work."

But Johnny proved to be a relentless suitor. Every single day he called up Beth in Manila. Every so often, he would come to Manila to see her. On September 21, 2003, exactly a year after the two first met, he proposed. And on May 30, 2004, they got married in Catholic rites at the Christ the King Parish Church in Greenmeadows, Quezon City.

Last year marked their third Christmas together. It was the third year of their holiday gift-giving for at least a hundred less-fortunate families living along Roxas Boulevard. Beth says the gift-giving, which they usually do at around 9 p.m. of December 24, was all her husband's idea.

After playing Santa, the two make it a point to be home by 11 p.m. for their own traditional noche buena. "We have the usual—spaghetti, jamon, excelente, hot chocolate, hotdogs."

On Christmas Day itself, Beth's relatives, on both her mother's and father's side, converge on the Wongs' Quezon City home for a catered lunch. It's one big happy occasion. "Dito na sila. Tutal, sabi ng mommy ko, ako ang may pinakamalaking house."

Throughout the day, her godchildren and her kumares and kumpares also drop in. "The house is basically open on Christmas Day, from lunch time hanggang gabi."

Well, this Christmas it's open house once again!