Jessa Zaragoza and Dingdong Avanzado move to the U.S. 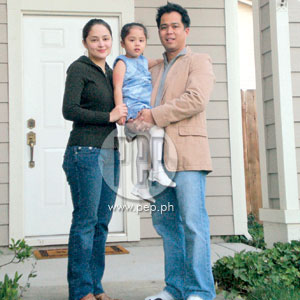 The Avanzado couple and their three-year-old daughter, Jayda, own this brand-new, four-bedroom house in Vallejo, California. Dingdong bought this in June as a surprise gift to his wife and daughter, who arrived in the U.S. in August. (YES! January 2007 issue)

Singers Jessa Zaragoza and Dingdong Avanzado have joined the long list of local celebrities who have migrated to the U.S.


With Jemela Nettles as their lawyer, Jessa and Dingdong were able to secure the “visa for aliens of extraordinary ability,” given to aliens who have excelled in “the fields of sciences, arts, education, business, or athletics.” They and their daughter Jayda are now green-card holders.


It was Nettles who also helped secure the same special visa for April Boy Regino and his family, now based in Los Angeles.


Jessa and Dingdong made their decision to migrate during the March-April "Soul Sisters' concert tour. Dingdong, whose Vallejo-based relatives have a growing mortage business, returned to California last June to get their papers processed. Jessa and Jayda followed him in August.


Former Quezon City Councilor Dingdong is now working for the family business, and Jessa is taking care of Jayda’s education papers. Performing, however, remains a top priority for the couple.


In October, Jessa came back to Manila to launch her last album for Universal Records, Laging Ikaw, and to endorse the services of her surgeon, Dr. Raul Guanzon. In November, she was the special guest star of the Platters at the Peppermint Hotel in Reno, Nevada.


Early this year, 2007, Jessa and Dingdong will bring their "That Thing Called Love" concert to the U.S. This was the last concert they did at the Music Museum in Greenhills, San Juan.


As for their business in the Philippines, the Matua Agupa Guam Visitors Bureau, they will let their business partners run it here, although they have plans of expanding to Vallejo.


Jessa says she’s happily adjusting to her new life. Without any domestics to help her with the housekeeping, the singer known as the Phenomenal Diva now proudly calls herself the Phenomenal Maid.