Paolo and Miren Fabregas: The Wedding 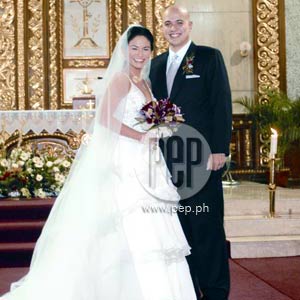 Though they already knew each other, it took a staging of William Shakespeare’s Twelfth Night in 2000 for Paolo Fabregas to actually notice Miren Alvarez.


“The moment she made her entrance, I knew she was the one,” recalls Paolo in an email interview. “I had to restrain myself because she hadn’t said a line. I remember thinking, ‘Whoa! Don’t fall in love yet, Paolo. Let her at least say a line.’ She did, and then dramatically moved downstage left. After she did that, I thought to myself, ‘I’m in trouble.’”


The two went on to work together in plays and found themselves falling for each other. Paolo, 28, finds Miren “beautiful, incredibly confident, and talented to boot! She moves so gracefully and I think that is so sexy.”

Thirty-year-old Miren likes Paolo’s fun-loving nature and the fact that he never runs out of things to say: “He loves to talk, you don’t have to, like, pry him out of his shell. Most of the time you got to tell him, ‘Okay, shut up,’ because he just talks and talks and talks.”


The two were engaged on December 23, 2005. They remember the date well. That was when Paolo proposed to Miren at her front door.


“You know, if I had to analyze our relationship, I think its one defining characteristic was its rules. We had borders and rules to protect each other from each other because we couldn’t say with any certainty where this was going. And these rules were mostly your rules to protect you. However, if things go well, this is my one chance to change the rules.”


With that, Paolo dropped to one knee, whipped out a ring, and asked Miren to marry him.


How could you say no to that?


“It was a great night!” Paolo laughs.