Marco Alacaraz: from hardcourt to limelight 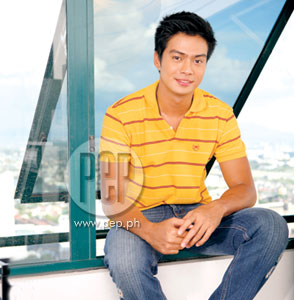 Three and a half years after he was introduced to showbiz, Marco Alcaraz is now considered one of its most sensitive actors, just waiting in the wings for the big break to stardom.


The boy from Cebu, however, had earlier dreamed of becoming a basketball star. In college, he played for the San Sebastian Stags, and his heart was set on shooting hoops professionally. But fate had other plans for him. The off-guard varsity player’s future career in basketball was pushed aside when he suffered a serious injury—an anterior cruciate ligament tear, or ACL tear—during a crucial game.


It was then that fate led him to the glitzy world of show business.
Hotshot entertainment talent manager Arnold Vegafria, who’s now Marco’s manager, happened to be a friend of long standing.


While buying time, the handsome 6-foot-1 hunk auditioned for a role in the ABS-CBN soap opera It Might Be You. He got to play the part of the third party in a love triangle with John Lloyd Cruz and Bea Alonzo. That role eventually opened up more opportunities for Marco.


Now, the once-reluctant actor is taking showbiz seriously. He has played supporting roles in various films, including Aishite Imasu 1941, Don’t Give Up on Us, and Angels. He even played the lead role in the 2005 movie Birhen ng Manaoag, and is now cast in a supporting role in GMA-7’s sinenovela, Pati Ba Pintig ng Puso?


Marco says he is happy that, despite his injury, God has given him another career. He has also come to realize that he needs to be professional to stay afloat in his current line of work.


“Sa showbiz, pag di malakas ang loob mo, mawawala ka. Kailangan competitive ka talaga sa lahat ng ginagawa mo. Kasi, before, when I got that role sa It Might Be You, love triangle agad, akala ko ganoon kadali. Siyempre, baguhan ka, walang masyadong alam sa acting. I was trying my best. But ’yong best mo might not be the best for all. Noon, hindi ako masyadong nagko-concentrate. Ngayon, I’m trying to prove myself to be a good actor.”
Meanwhile, love can wait. He says he has no girlfriend now, and has no immediate plans of getting into an off-cam romantic relationship.


As a dutiful son and the eldest of six children, Marco helps send a younger sister to college. She’s now taking up sports science at the University of the Philippines.


Thanks to his showbiz career, Marco has been able to buy a car, as well as a condominium unit of his own in Pasig. He now plans to put up a business with a friend.


But it’s not all work for this guy. When he’s not busy with showbiz commitments, Marco hies off to Batangas or Camarines Sur to pursue his new love—wakeboarding.