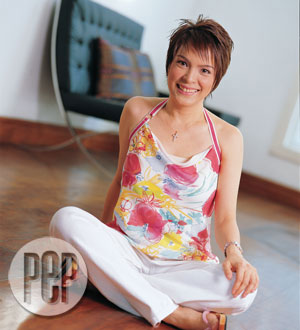 Jamie Rivera's singing career has taken many forms over the last 20 years. She was a pop sensation in the 1980s. She voiced Kim's misery in the long-playing international musical, Ms. Saigon, in the ‘90s. At the start of the new millennium, she metamorphosed into a gospel-singing sweetheart bearing the title Inspirational Diva.

For 10 years now, Jamie (Mary Jane Mendoza in real life) has been married to JB Mendoza, a doctor of medicine who has turned builder-contractor. They have a nine-year-old daughter, Reine.

Singing has been Jamie's great love for as long as she can remember. She trained with the Metropolitan Theater Chorus in 1984. The following year, aiming for a solo career, she joined G.A. Yupangco's Yamaha Music Mate Girls, a talent search. She was one of the winners. Shortly after becoming a Music Mate Girl, Jamie toured the country and performed in concerts while finishing her economics degree at the University of Santo Tomas.

The first recording company that signed her up was OctoArts. "I was really lucky to be with them," Jamie says, "kasi peak nila ‘yon, e. So, maganda ‘yong naging handling sa akin ng Octo."

Back in the country, Jamie did two bestselling pop albums, Once More (1997) and Feels So Right (1999), as well as a bestselling Christmas album, Sa Araw ng Pasko, (1998), under Star Records.

The year 2000 was the time she was given the label Inspirational Diva. It was the when she was tasked to sing "The Jubilee Song" in celebration of the Catholic Church's jubilee year. From that time on, she has become primarily involved in church music.

Jamie loves the title, but admits, too, that it limits both her repertoire and her income.

That's why the Inspirational Diva has come up with a new album, Jamie Rivera at Her Best, a compilation of her past hits. "All the songs are rearranged," she explains. The album includes hit songs such as "I've Fallen for You," "Mahal Naman Kita," and "People Alone."