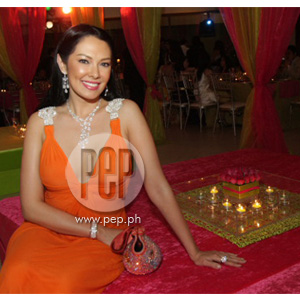 At 34, Ruffa Gutierrez feels totally blessed. She is successful as a mom, a daughter, an actress, an endorser, and as a host. She's "fabulously chic" too! She wears a Jun Escario gown during the early part of her birthday party.

“Romantic,” “beautiful,” “enchanting” are the three words to describe the mood of the party.

Every guest was greeted on the red carpet amid flashes of camera bulbs. Upon entering the doors of the Silk Pavilion, people were instantly enthralled by the beauty and grandness of the set-up. The middle area, which served as the dance floor, was enclosed with sheer curtains, and inside were square beds, made especially for the event. Hot pink and green were the colors of the night.

Cynthia Almario, the person in charge of the production design, told PEP (Philippine Enertainment Portal) that the theme was inspired by Sex and the City, an idea pitched by the birthday lady’s closest friends.

“BIG TIME” GUEST LIST. The room was jampacked with an interesting mix of people.

Jessa Zaragoza and Dingdong Avanzado were also spotted, and shortly after they left, Rufa Mae Quinto entered the hall with buddy LJ Moreno.

The elusive Dody Puno, who is presently linked to Gretchen Barretto, also made his rare appearance in the big showbiz event that night. But La Greta, who is Ruffa’s friend, was noticeably absent.

And of course, Ruffa’s dad Eddie Gutierrez and her mom Annabelle Rama were very visible, hopping from one table to another. The handsome brothers of the host-actress—Tonton, Monching, Rocky, Elvis, and Ritchie Paul—were also present.

All in all, there were more than two hundred names in the guest list and the attendance registered more than half.

EVENT’S HIGHLIGHTS. In place of a program was a game. The mechanics was simple: Seven friends would ask a question via a video presentation, and seven guests would be asked to answer. Raymond and Donita hosted the game portion.

Now here are seven fascinating things you should know about Ruffa:

1) What does Ruffa wear to sleep at night?

Ruffa answered in jest, “It depends on who I am with in bed.” But normally, she wears “big shirt.”

3) What was the first commercial of Ruffa?

4) What was the usual cause of Ruffa’s spat with her mom Annabelle?

5) What’s the favorite expression of Ruffa?

7) Who’s the favorite Sex and the City character of Ruffa?

Ruffa chose not to answer it.

After the game, Tessa Prieto-Valdez and Anton San Diego had a quick Q & A with Ruffa. When asked about what she wants for her 34th birthday, the birthday lady answered, to be “continuously happy and blessed.”

Before the party officially began, Dr. Vicki Belo, the lady responsible for the grand night, delivered her message to the newest endorser of Belo Medical Clinic. “I hope you appreciate your party. You’re enjoying it,” the beauty doctor said.

She added, “I’d like to thank you so much for going back to Belo. And I promise that for every birthday, you’ll be younger and beautiful.”

Eddie wants his only daughter to be wise in choosing Mr. Right. “If she ever falls in love, I want her to choose the right guy. And since she’s my one and only daughter, I want her to be completely happy,” the patriarch of the Gutierrez family said. He added, “At isang lalaking magmamahal din sa mga anak niya.”

With all those sincere wishes from the people who matter to her and who love her, Ruffa told PEP she couldn’t ask for anything more. “Alam mo, wala na akong mawi-wish sa buhay ko because I feel that I am blessed,” said the Belo endorser-actress-TV host.

With that positive outlook, plus her family's unwavering support, her enduring friendships with a lot of people in and out of showbiz, and her dedication to her job, Ruffa can expect more "fabulous birthdays" in the years to come.