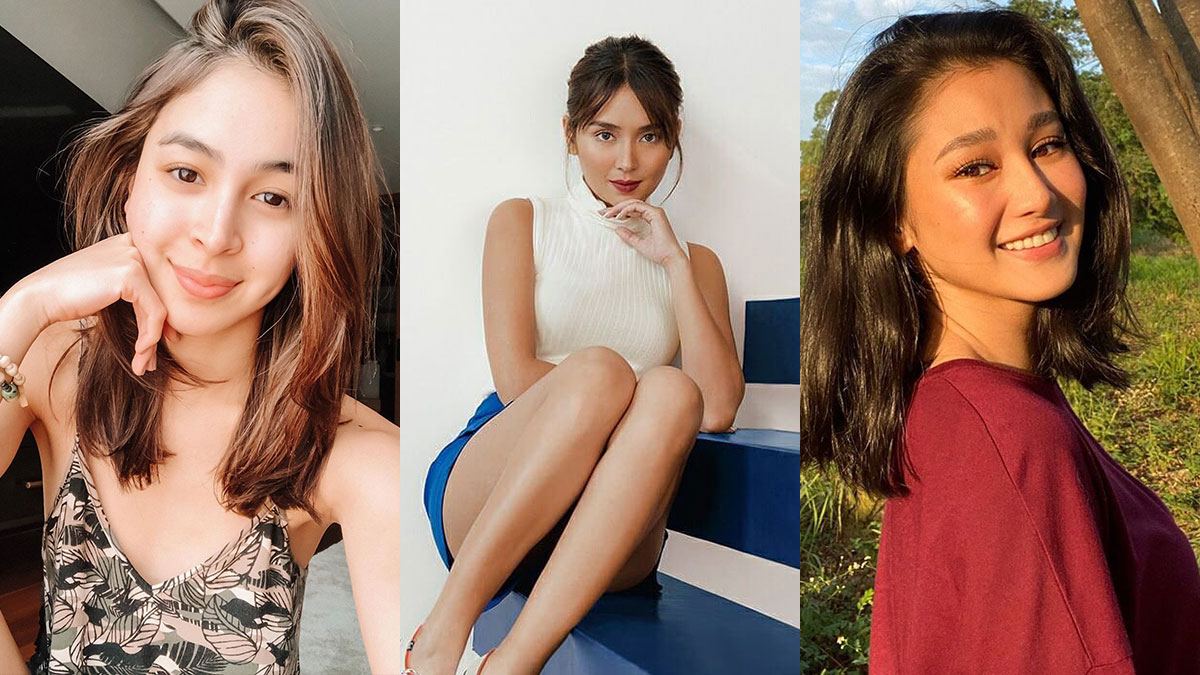 (L-R) Julia Barretto, Kathryn Bernardo, and Chie Filomeno are just some of the stars who were bashed for their imperfections, but responded with strong quotes on body positivity.
PHOTO/S: @juliabarretto / @bernardokath / @chiefilomeno on Instagram

Life in the entertainment industry is like living under a microscope.

Celebrities feel the pressure to maintain a "perfect" image as their every move is scrutinized. Some fall into the trap of unhealthy diets or extreme fitness routines, while others even experience anxiety or depression because of the stress and pressure.

But through the years, more and more celebrities are accepting their true selves and fully embracing their imperfections.

Here are some of their remarkable quotes on body positivity.

Kathryn Bernardo was bashed when she shared her thoughts on the ABS-CBN shutdown issue.

The 24-year-old Kapamilya actress received hundreds of mean comments on social media, some of which were not even related to the issue at hand.

On Sunday, May 17, Kathryn took to her vlog "Everyday Kath" to address some of these mean comments, including one where she was called "sakang" or bow-legged.

The Star Magic talent had the best clapback to those bashing her for having legs "na parang parenthesis."

Kathryn admitted that her bow legs were once a source of insecurity, but she learned to embrace this "flaw" with the help of her reel-turned-real life boyfriend Daniel Padilla.

"Through DJ na-overcome ko insecurity ko about my legs."

To end this issue, Kathryn laughingly addressed her bashers and said, "Come on! You kiss my f*cking legs! Hahaha!"

Julia Barretto became a champion for flat-chested women after admitting that she is on "Team Nipple Tape" since "walang kakapitan ang bra."

Netizens even crowned her the "Queen of Flat-Chested."

Julia proudly owned the title in her interview for Tonight With Boy Abunda on May 14, 2019.

When asked about her new moniker, Julia told Boy Abunda:

She continued, "Siguro, natuwa lang ako sa mga comments [that show that now], they are more open about it. They’re more proud of it.

Year after year, GT member Chie Filomeno has been criticized for either being "too skinny" or being "flat-chested."

Chie was body-shamed by some netizens after her red carpet appearance at the ABS-CBN Ball 2018 held at the Makati Shangri-La on September 29, 2018.

In a Twitter post a day after the event, Chie stood up to her bashers and didn't let the body-shamers win.

"How sad that there are so many cruel people in this amazing universe, and that some girls are bringing each other down when we should be the one lifting each other up.

"Body shaming is not okay, it'll never be okay. Not ever."

Chie ended, "No body is a tragedy. And don't ever let anyone shame you for being you."

Despite her tweet, bashers came at Chie again when she attended the ABS-CBN Ball the following year. They criticized her "disproportionate chest" as she walked the red carpet at Shangri-La at The Fort on September 14, 2019.

This time, the Star Magic talent did not mince her words and she came after her bashers with a feisty tweet.

In February 2018, Bela Padilla uploaded a photo of herself wearing a bikini while lying on the beach, basking in the sun.

The Kapamilya actress took to Twitter to address these body-shaming comments, as she wrote:

"Shocked by the number of comments on my IG post, pointing out that I have a belly. Yes I do. It holds in my organs that I need to live. It has a layer of muscles that I worked hard for in the gym and a layer of fat from the food I enjoy to eat."

In another tweet, she continued, "Would it have made you more comfortable if I edited my photo to perfection?

"Because I could have easily done that. But what message does it send to the younger ones? That our photos are only likeable when we’re perfect in photos?

Jessy Mendiola opened up about her battle with depression after netizens bullied her for having "thunder thighs."

The Kapamilya actress received mean comments on social media after she was hailed FHM's Sexiest Woman in 2016.

In an Instagram post published in March 2018, she recalled, "When I won FHM’s sexiest woman in 2016, I thought... finally, people appreciate my efforts and my body.

"But I was wrong. I was bullied, body shamed with bashers calling me names like 'pata, baboy, taba, etc.' I felt really down and started losing my confidence.

She continued, "I loved myself then (big thighs, belly rolls and round face) but when people started pointing out my flaws, I started hating myself, at times even thinking I was a bad person for having 'thunder thighs.'

"I stopped working out, I got depressed, binge ate my feelings off and started gaining more weight than I should."

Jessy's depression led to bulimia and a binge-eating disorder, which resulted in weight gain.

However, Jessy was able to pick herself up and change her perspective. This inspired her to get back in shape and live a healthier lifestyle.

Jessy continued, "I thought of myself as sexy, strong, and beautiful in my own way.

"I started building myself up again despite what other people say (until now they call me names) and have lost 15 lbs since."

"I still see myself as the 'pata girl' and it’s okay, it is just a matter of perspective.

"When I decided to shift perspective, everything started falling into place.

"I may not be the sexiest for others, but I am sexy and beautiful for myself, that alone is enough."

The Kapamilya star ended her post with a message to women who also have thick thighs: "Shout out to every 'pata girl' out there, just keep going. Love yourself, love your body and it will love you back.

Gabbi Garcia loves her body, flaws and all.

In March 2018, she stood up to the bashers who criticized her flaws, as she wrote in an Instagram post, "Whenever I post swimsuit photos, people would always bully me for my body. Well, guess what!!

"Yes, I have no boobs, I’m flat chested + I have my own fair share of stretch marks.

"And I don’t see anything wrong with it.

"If your definition of being 'sexy' doesn’t fit with my body type, well then sorry, but I LOVE MY BODY."

She ended, "And nobody deserves to be bullied just because of your body. We are all beautiful in our own way! #NoToBodyShaming #LoveYourBody"