ABS-CBN Ball 2019: Kilig-worthy moments you did not see on TV 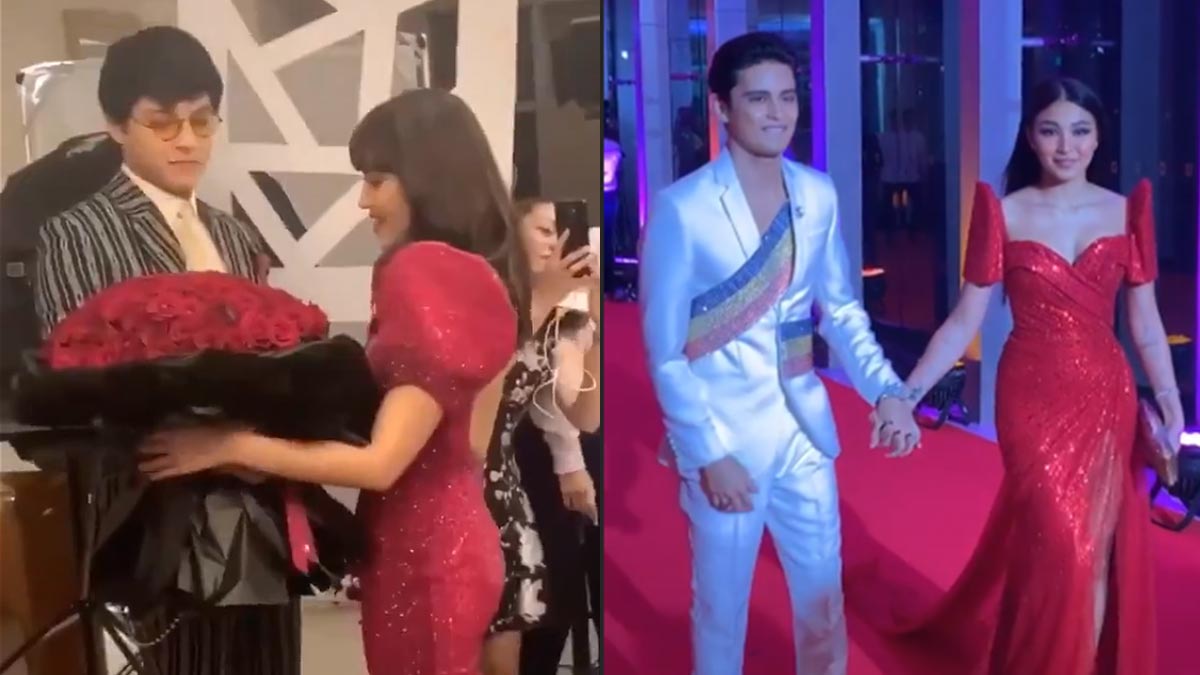 Kathryn Bernardo and Daniel Padilla, Nadine Lustre and James Reid give an extra dose of kilig at the ABS-CBN Ball 2019.
PHOTO/S: @my_maruchan on Twitter / @alexdgreater on Instagram

More than 400 celebrities gathered for a night of glam and elegance at the ABS-CBN Ball 2019.

The Kapamilya network's annual charity ball was held at the grand ballroom of Shangri-La at the Fort in Bonifacio Global City, Saturday night, September 14.

With these number of stars in one place, expect a threshold of precious, kilig-worthy celebrity moments—some were not even seen on television.

Here are the cute couple moments that made us kilig at the ABS-CBN Ball 2019:

Before they stepped out on the red carpet, Daniel Padilla surprised girlfriend Kathryn Bernardo with a big bouquet of roses that matches the actress' Michael Cinco gown.

Daniel has actually made it a tradition to give Kathryn a bouquet of flowers before they go to the ball.

Another kilig-worthy moment was captured by the couple's close friend Pamu Pamorada on her Instagram Stories.

Daniel took off his blazer and put it over Kathryn's shoulder to protect her from the cold.

In an interview posted on ABS-CBN's Instagram Stories before the event, a fan asked the couple their secret to a lasting relationship.

Daniel added, "Just appreciate your partner all the time."

James Reid and Nadine Lustre made heads turn upon their arrival at the grand ballroom.

But what made their fans more kilig is how they held each other's hands all throughout the evening.

Liza Soberano looked heavenly in her Patricia Santos Filipiniana gown. She was styled by Perry Tabora.

The 21-year-old actress and reel-turned-real life leading man Enrique Gil made several stops on the red carpet for interviews with the press.

Enrique served as Liza's assistant during the press rounds and made sure that Liza's sleeves are always in place before she had her photos taken.

Kim Chiu had trouble walking in her Barong Tagalog-inspired Filipiniana Benj Leguiab, and walking up and down the stairs made it a lot challenging for her.

But boyfriend Xian Lim came to her rescue by carrying her down the stairs.

Ronnie Alonte is also quite a gentleman.

His girlfriend, Loisa Andalio, also had problems moving around in her form-fitting Filipiniana by Amandra Jazz.

The Hashtags member made sure to always be by Loisa's side to assist her anywhere she goes.

Maymay Entrata and love team partner Edward Barber had a mini photoshoot before they stepped out on the red carpet of ABS-CBN Ball 2019.

Fans could not handle their kilig with how Edward looks at Maymay during the photoshoot.