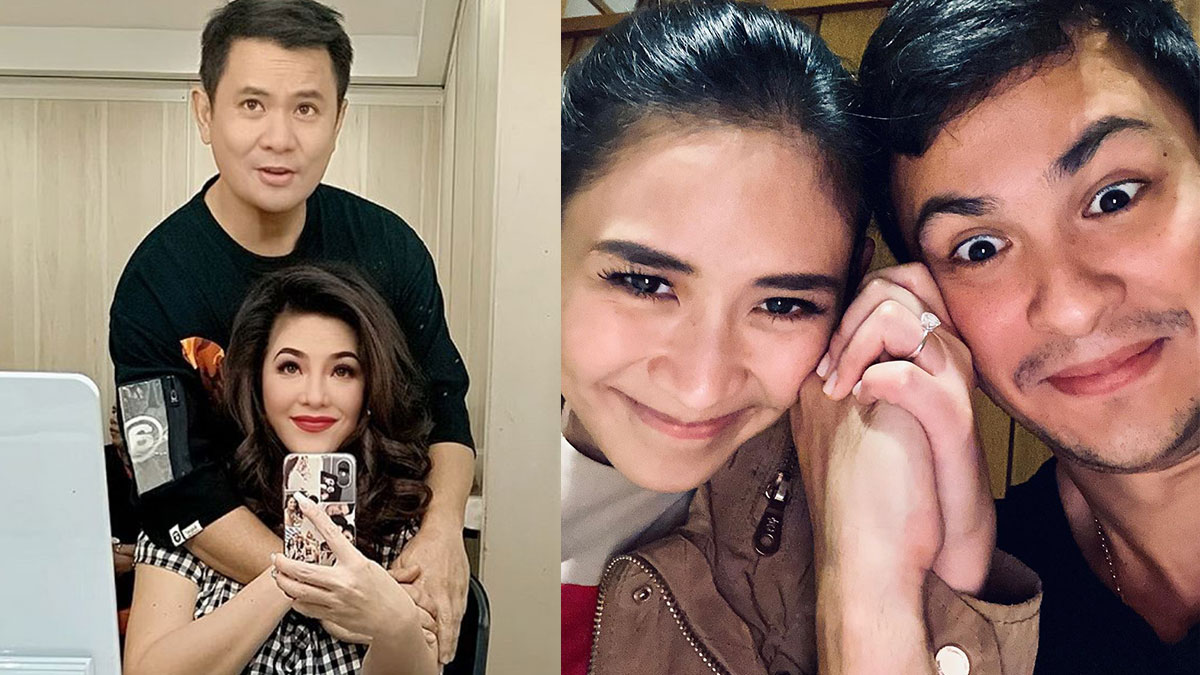 Sarah Geronimo and Matteo Guidicelli made headlines today, Thursday, February 20, after veteran entertainment editor Ricky Lo opened Philstar.com with a morning report saying the two stars would be tying the knot in a secret wedding this very day.

The report did not give a place or a time, except to say that the wedding would be happening "anytime today."

But it also added a big question mark at the end of the title, thus: "Sarah and Matteo, getting married today?"

But, this morning, Sarah was spotted on the set of The Voice Teens Philippines Season 2, where she is one of the coaches of the ABS-CBN singing competition.

Carlo Yanesa, who identifies himself as belonging to the music department of ABS-CBN, tweeted a video showing him and Sarah in the Kapamilya studio at around 10 a.m.

By 1 p.m., he had reposted the video on Instagram, where Sarah is seen in casual clothes and a casual ponytail, happily giving the peace sign using both hands.

The video, netizens feel, effectively puts an end to that breaking news.

However, the story of Sarah and Matteo's upcoming wedding continues to whet the public's imagination.

It is, after all, going to be the union between a female star who's been called the country's Pop Star Princess for her highly successful forays into recording, movies, television, and the international concert scene, and a male star with Filipino-Italian roots who has made incursions into acting, singing, modelling, karting, triathlons, and military service.

That the Pop Star Princess has virtually been kept in a bubble by her protective and religious parents, Delfin and Divine Geronimo, who, weeks before the expected wedding, are still said to frown on the Sarah-Matteo relationship, has made the union even more interesting to thousands of fans.

While no details about the wedding have been forthcoming—the only clear thing is that it will happen this year, and just possibly in March—there is endless speculation about who would make up the wedding entourage.

Among those expected to be at the couple's wedding is Regine Velasquez, who Sarah openly looks up to as one of her mentors and closest friends in the entertainment industry.

In an interview with PEP.ph (Philippine Entertainment Portal) contributor Melba Llanera, Regine remained tight-lipped about whether the couple has approached her to be one of their wedding sponsors.

But during Regine's interview with PEP.ph and other members of the press last January 24, in a Makati studio, following a photoshoot with BYS Philippines, a makeup product she endorses, Regine said she was certainly open to being the couple's "ninang."

With Sarah and Matteo entering another chapter in their relationship, the press asked Regine for marriage advice she could share with the couple.

Turning more serious, Regine went on to say that all couples should value even the small things they do for each other.

"It doesn't feel that way because he makes life so exciting for me. And since he does that, I also try to do the same.

"Yung little things like that will add color to your relationship."

Honesty and communication also play an important part in a relationship, Regine said, especially when things get a little rough.

Regine also advised Sarah and Matteo to go out even after they are married.

More importantly, Regine said, it takes great effort for a couple to maintain a long-lasting relationship.

"It's great to be married, it really is. Provided, of course, that you're married to the right person.

"The thing is, you wouldn't know if that's the right person, pero kayong dalawa, you can make it right.

"Kayong dalawa, puwede niyong gawing kayo talaga para sa isa't isa. All you have to do is to continue talking."

Sarah and Matteo have been dating since 2014. The couple officially became engaged in 2018, but it was only last year when their engagement became known to the public.