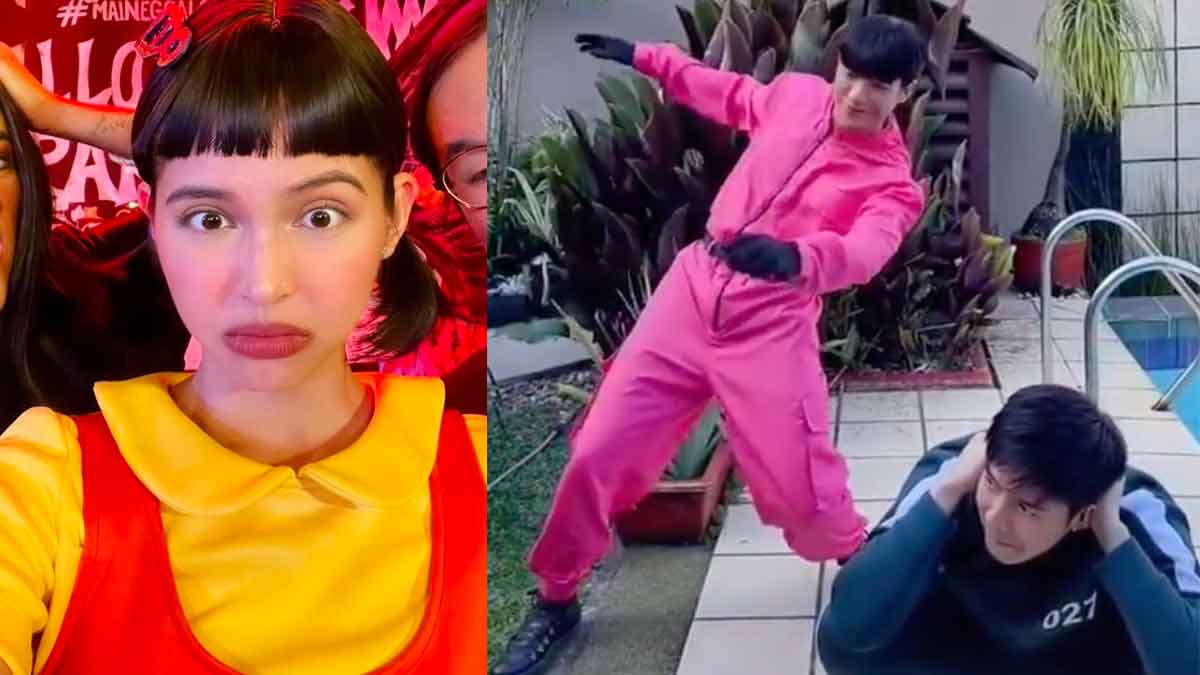 Maine Mendoza, Robi Domingo, and Darren Espanto are among the celebrities who dressed up as characters from the hit Netflix series "Squid Game" for Halloween 2021.
PHOTO/S: @mainedcm on Twitter / @darrenespanto on TikTok

With the worldwide success of Netflix's Squid Game, it comes as no surprise that it has become the theme of this year's Halloween costumes and parties.

Squid Game is a series about a group of 456 adults, all buried in debt, who are made to play violent and gruesome versions of popular Korean childhood games in hopes of winning a cash prize of around USD38 million.

Many celebrities donned costumes inspired by the hit series.

On Friday, October 29, 2021, Eat Bulaga! host Maine Mendoza dressed up as the series' giant robot doll called Younghee for the final episode of #MaineGoals, her travel and lifestyle show which airs on BuKo channel.

The doll is famous for chanting "Mugunghwa Kkoci Pieot Seumnida" or "Red Light, Green Light" in one of the deadly games played by the characters.

Maine had a Halloween party special for the show's finale, and shared some of the photos on her Twitter account.

She wrote, "#MaineGoals season 1 – achieved! Thank you for joining us tonight sa aming Halloween party and for being with us for 13 weeks!

"Grateful for every adventure taken with the besties and with you all.. pero hindi pa dito nagtatapos! See you next season – to more #GoalsAchieved! [emoji]"

Allan uploaded a photo of himself wearing the costume with the actual scene from the series as his background.

Some celebrities chose to give life to other characters of the show.

Robi Domingo and Darren Espanto did a TikTok video dressed up as Squid Game characters.

Robi was contestant 027, while Darren looked like the show's actor Wi Ha-Joon, who played the role of Hwang Jun-ho, a policeman.

Ayesha Zara dressed up as Younghee. Yasmien was Kang Sae-byeok (portrayed by Jung Ho-yeon), while her husband transformed into Seong Gi-hun (portrayed by Lee Jung-jae).

Yasmien posted their photos wearing their costumes on her Instagram account with the caption: "LET THE GAMES BEGIN [emoji] Happy Halloween [emoji] Keep your eyes [emoji] open! Don’t get caught by the robot doll #Younghee"

The couple also turned their dog Nala into Younghee.

Events host Tim Yap took his Squid Game Halloween costume to the next level when he used prosthetics to turn himself into Oh Il-nam, the show's player 001 who has a big role in the series.

Model-actor Fabio Ide had fun playing a Squid Game guard with his girlfriend Ellen Frojd, while his daughter Danielle donned a white shirt and green tracksuit to become a Squid Game player.