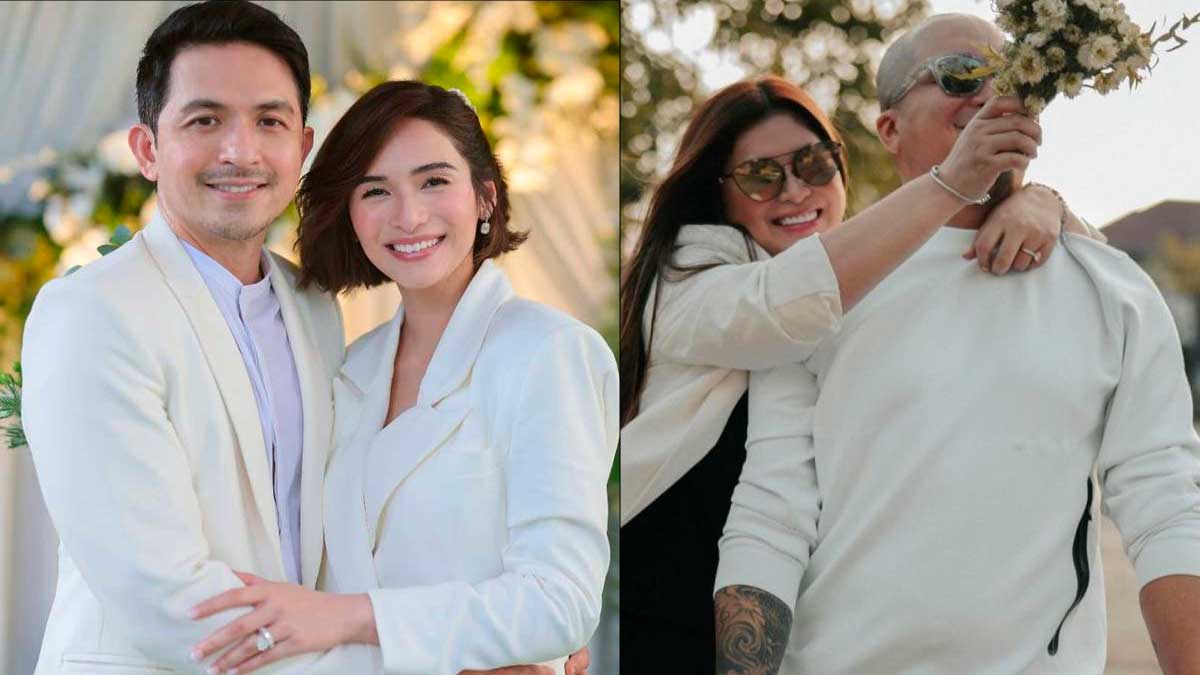 Two of the couples that tied the knot in a simple civil wedding ceremony amid the pandemic this 2021 were Dennis Trillo and Jennylyn Mercado, and Angel Locsin and Neil Arce.
PHOTO/S: @teampatdy on Instagram / Nice Print Photography

These celebrities and their partners proved that even a pandemic could not stop them from celebrating their love and commitment to one another.

Instead of donning a bridal gown, Jennylyn chose an all-white suit dress that matched her husband's attire for their big day.

In a YouTube vlog, the long-time couple revealed that there were unforeseen circumstances that almost marred the important occasion, such as bringing the wrong wedding ring box, the rain, and the one-hour delay.

But to them, the only thing that mattered was, “Tuloy ang kasal.”

Associate Justice Jhosep Lopez of the Supreme Court presided over the simple ceremony.

The couple announced their engagement and Jen's pregnancy to the public on October 29, 2021. 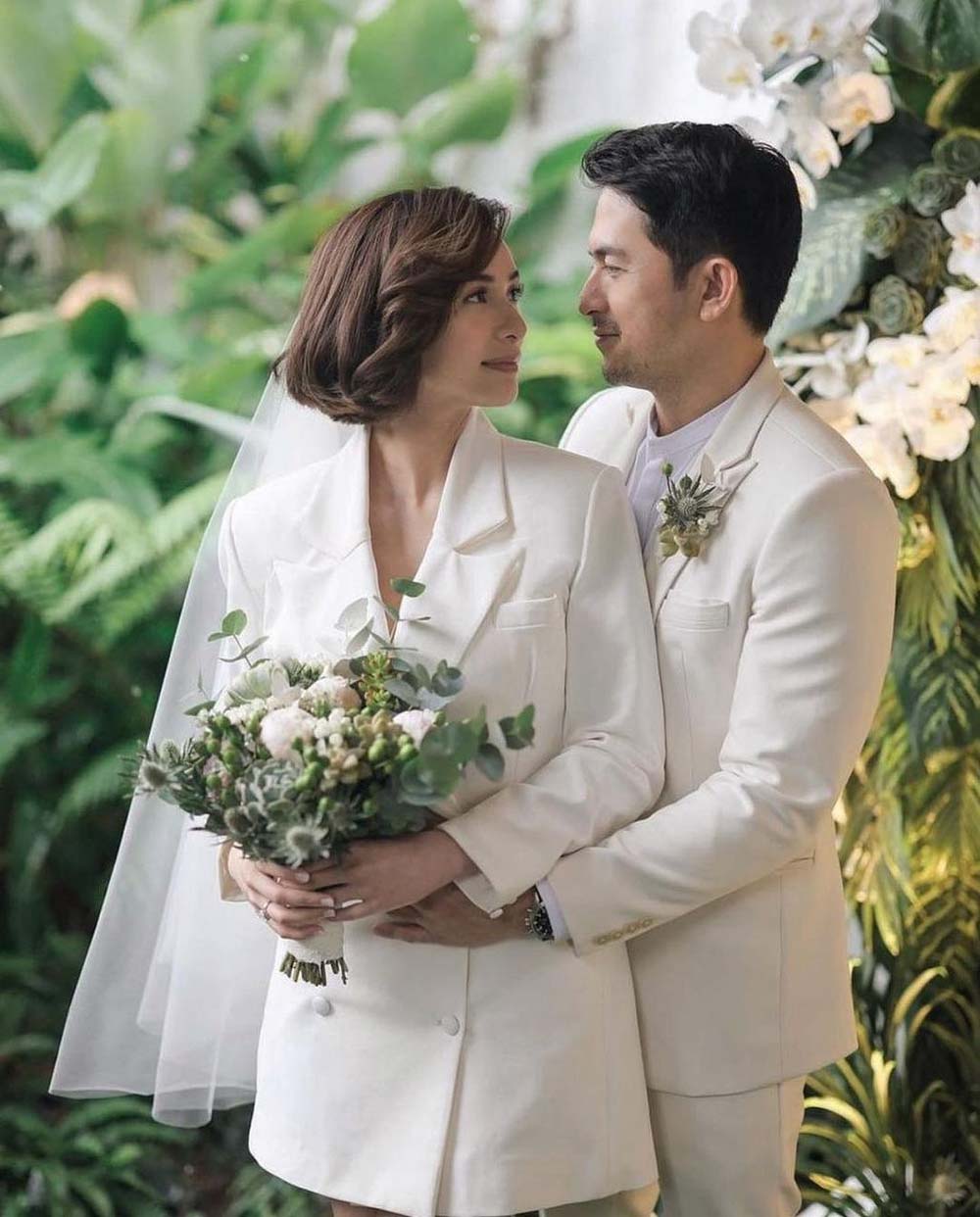 Mark Herras and Nicole Donesa began their journey of a lifetime as husband and wife on September 8, 2021.

According to the couple in a YouTube vlog, everything was a spur-of-the-moment decision. Only five people attended their intimate wedding.

They initially planned for the civil wedding to take place last year, but due to the pandemic and Nicole's American citizenship, they had to settle a lot of things beforehand. 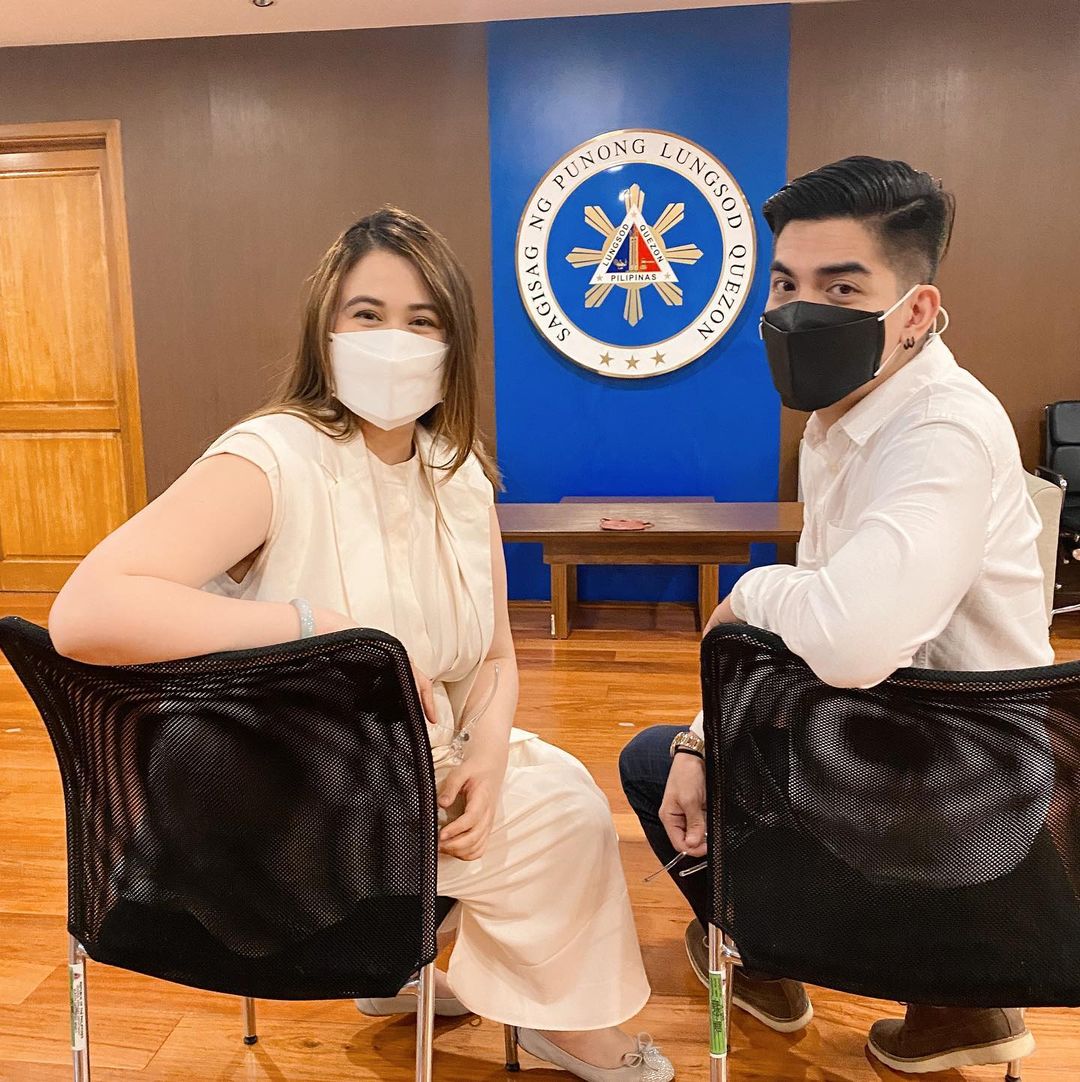 The ceremony took place shortly after Joel asked Juliana to get married.

The bride looked stunning as she walked down the aisle in a lace wedding gown she bought online for PHP5,000.

The couple celebrated their wedding with their sons, Ace Christian and Jack Alexander. 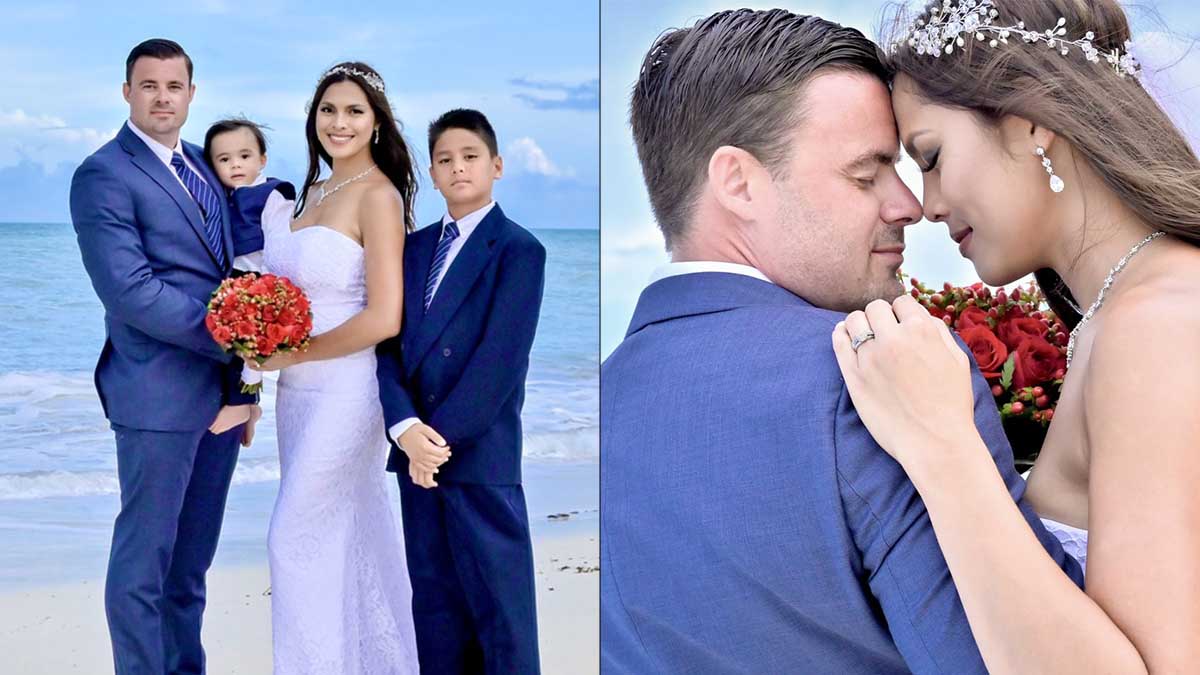 Angel was cool bride dressed in a white top, black jeans, and sneakers on her wedding day. Neil was similarly dressed in a black and white OOTD.

According to the groom, he promised to give his bride her “dream wedding” because Angel did not experience going to prom and having a debut.

They were supposed to hold a grandiose wedding on November 8, 2020, but this was postponed due to the COVID-19 pandemic.

The couple made their relationship public in February 2018, and got engaged in June 2019.

Yam Concepcion was a lovely bride in her simple white wedding dress paired with a hat. Rather than carrying a bouquet of flowers, she brought her pet dog Tiny.

The Kapamilya actress tied the knot with her long-time boyfriend Miguel CuUnjieng, who is based in New York.

Their six-year long-distance relationship culminated into a civil ceremony held on July 24, 2021 aboard a yacht that sailed on the Hudson River in New York City. 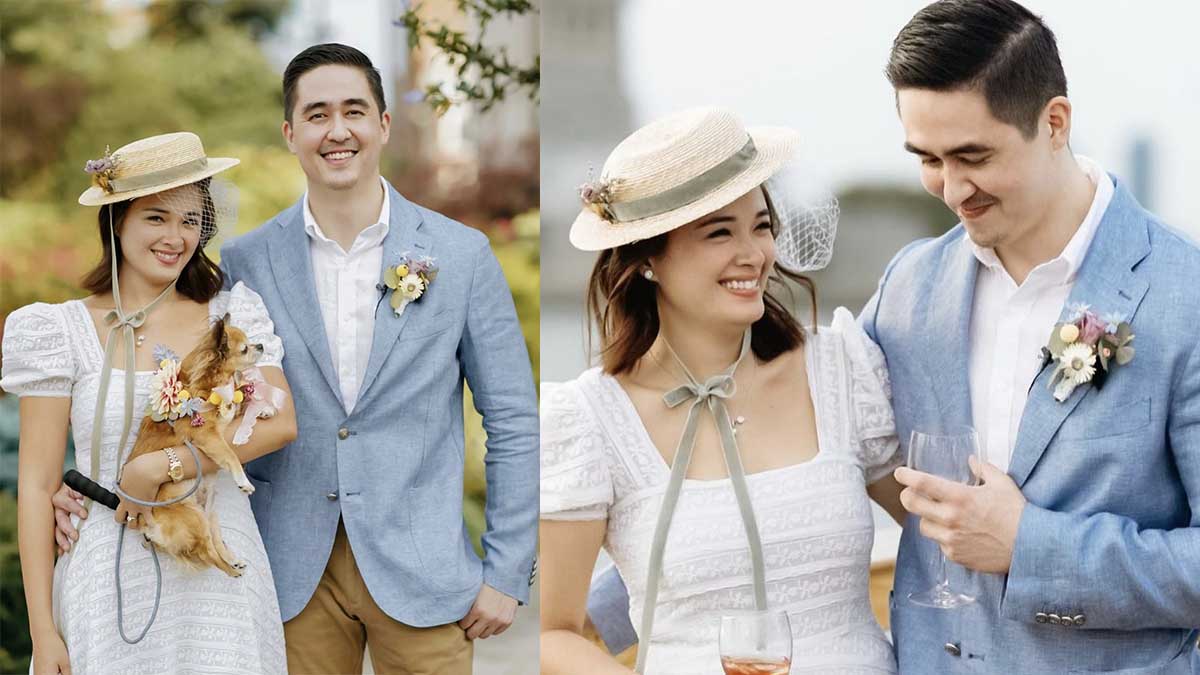 Rachel was elegant in her modest flowing white wedding gown designed by Just Bonita of Bonita Penaranda, her go-to stylist since her pageant days.

The couple got engaged in November 2019, but had to postpone the wedding because of the pandemic. 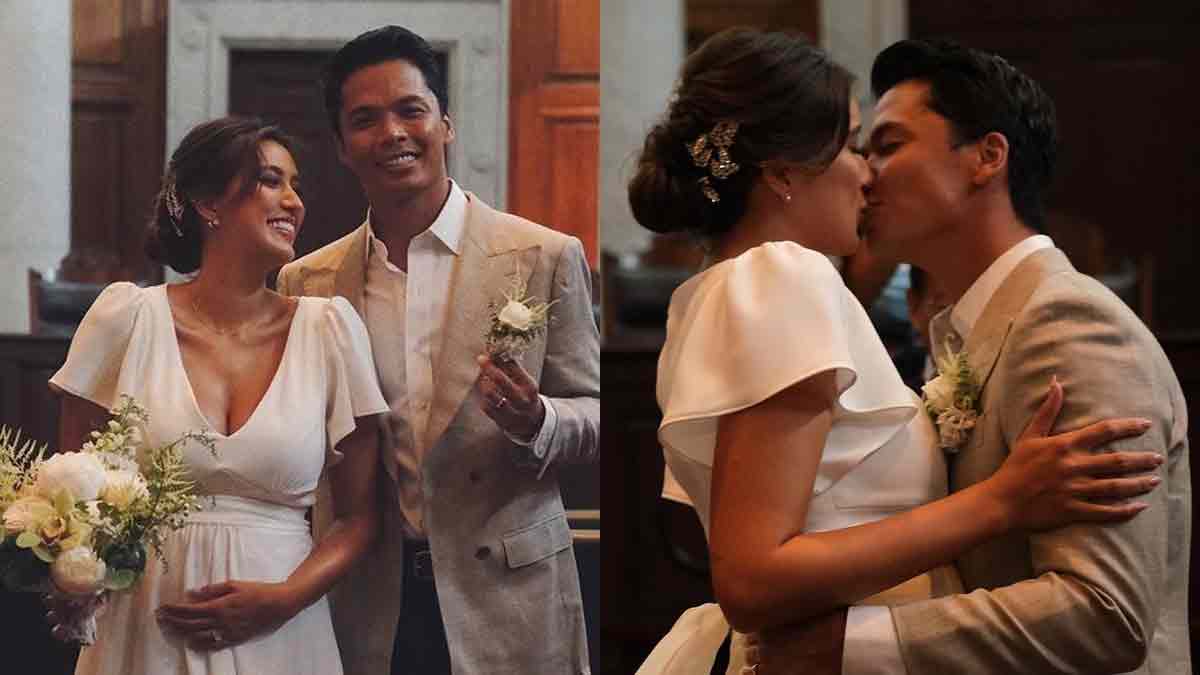 Bianca King married her husband Ralph Wintle at their home in Sydney, Australia.

The actress did not give further details of the simple wedding ceremony that was held in their living room.

In an Instagram post dated June 4, she wrote, “Exactly what we wanted. Low-key, quick, inexpensive, stress-free and barefoot. Nothing beats the comfort of your own home.”

Ralph is the younger brother of Ben Wintle, the husband of actress Iza Calzado.

Dionne Monsanto was a practical bride as she donned a simple off-shoulder wedding corset she bought online for PHP300.

The former actress is now the wife of her long-time boyfriend Ryan Stalder. Their intimate civil wedding ceremony was held last March 8, 2021, in Bern, Switzerland.

She wrote on her Instagram post, “As I’ve gotten older, I realize more and more that things are just things. That I don’t need a lot to be happy. That love & respect from people I love are more important than any material possession. [white heart emoji]” 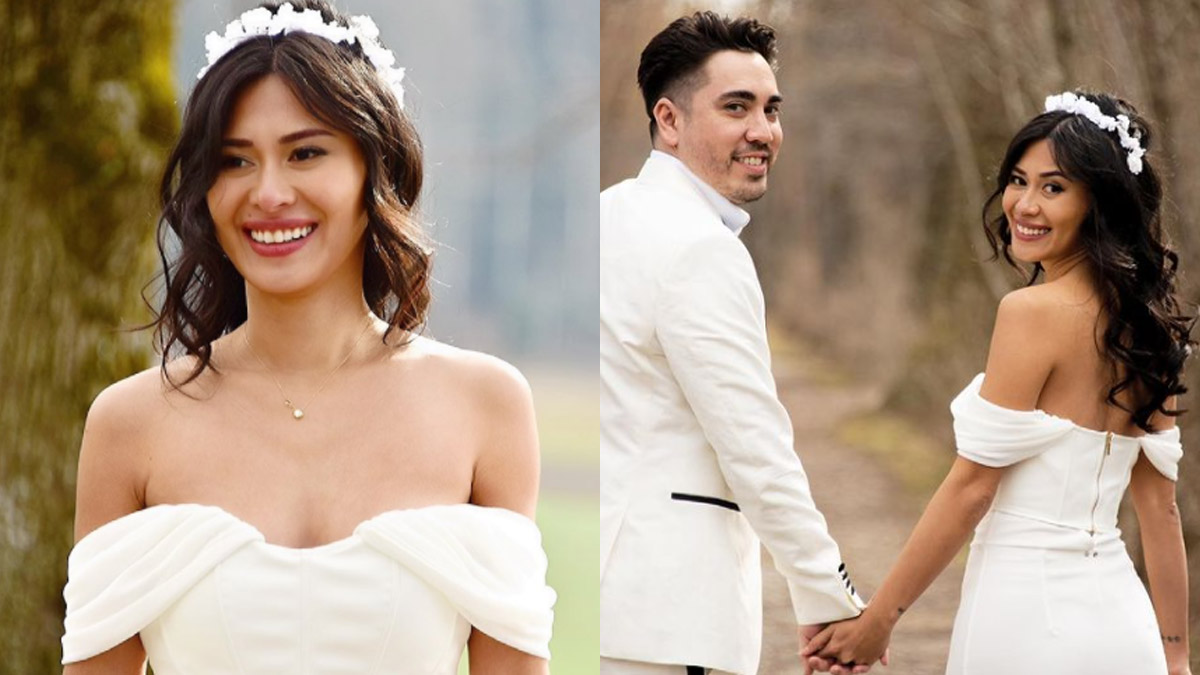 Sam and Anthony's wedding by the bay took place on March 8, at the Conrad Manila's roof deck.

The small ceremony was witnessed by four guests, and a simple after-wedding celebration was held with the sun set and Manila Bay as the backdrop.

Their civil wedding ceremony was held at their home in Bay Area, San Francisco, California.

The actress said in an Instagram post, “We even used a toolbox as our laptop stand! So classy!"

Actress Jessy Mendiola and actor-host Luis Manzano got married on February 21, 2021 at The Farm at San Benito in Lipa, Batangas.

Luis' parents, Edu Manzano and Lipa City Congresswoman Vilma Santos, and his stepfather Senator Ralph Recto were in attendance. Only 20 guests were invited to witness the civil wedding ceremony.

The bride looked sophisticated in a white gown and her hair tied back in a low neat bun, while the groom was dressed in a pink suit.

While many know Luis as a man of humor, he was teary-eyed and overwhelmed with joy when he saw Jessy walking down the aisle.

The couple started their relationship in 2016 and got engaged in December 2020. 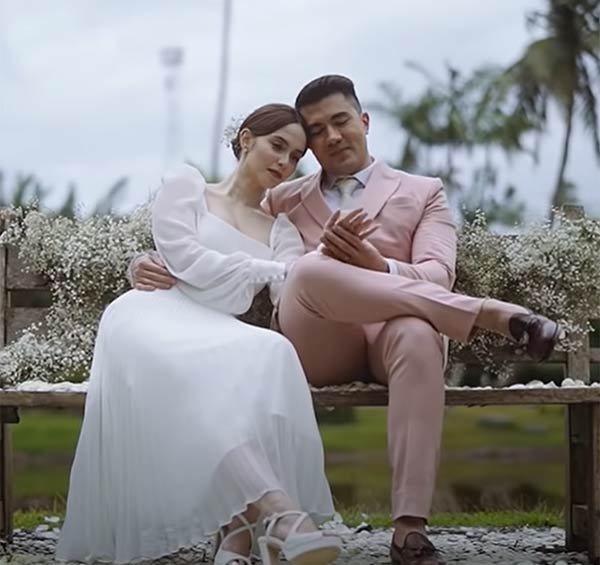 Last February 13, 2021, the couple married in a civil ceremony in France.

The couple was originally scheduled to tie the knot on June 6, 2020, but they postponed the ceremony in light of the pandemic.

Their one-year-old son, Cooper John, was present at the wedding.

David Semerad is the twin brother of Anthony Semerad, who is also his teammate in the basketball team TNT Tropang Giga and the husband of Sam Pinto.

They had a naval-themed wedding held at BRP Davao del Sur LD602 Battleship since Rocco is a Philippine Navy reservist. 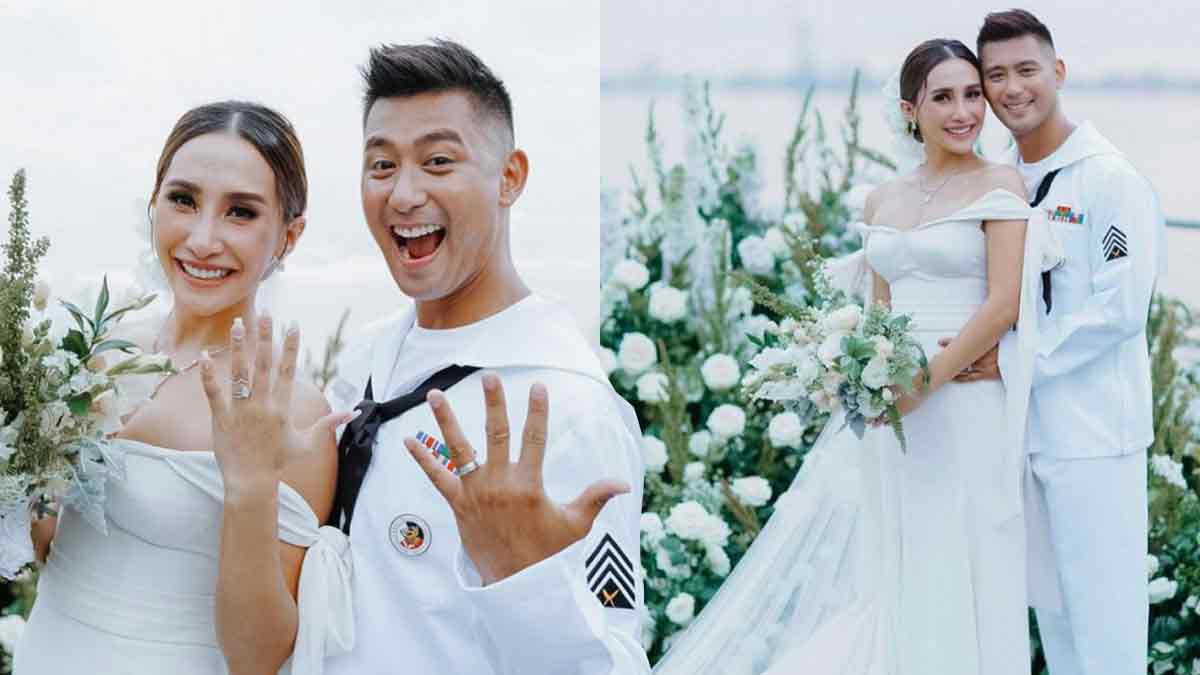