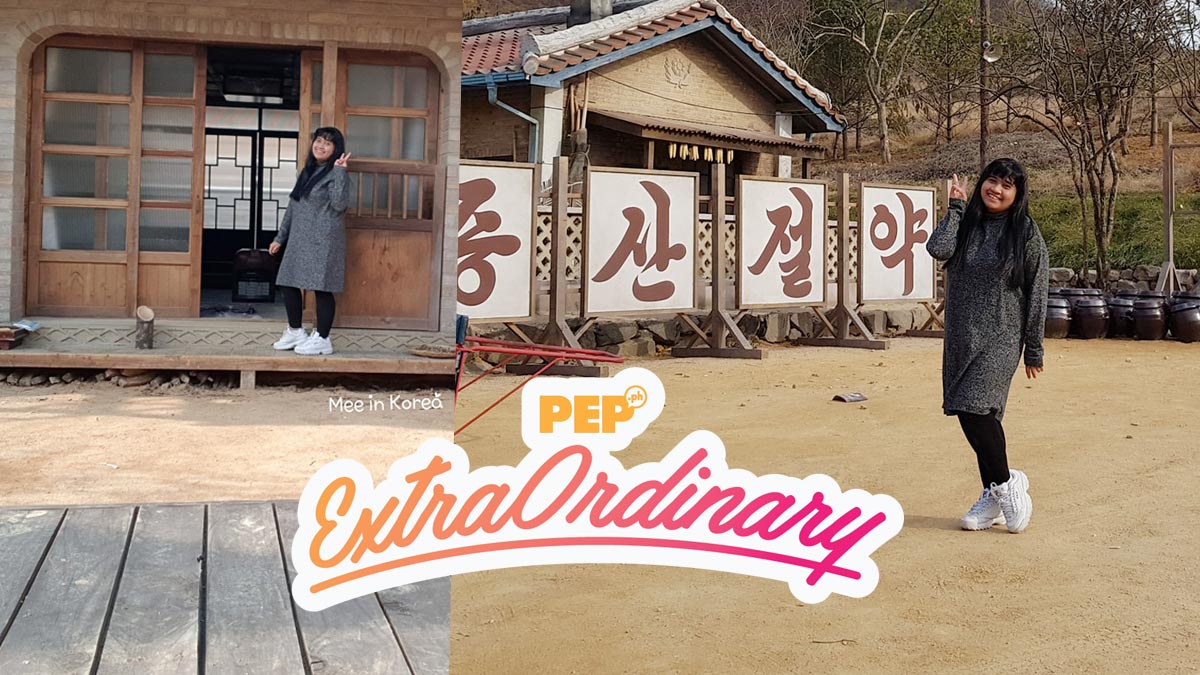 Imee "Mee" Aresta-Lee felt like Yoon Se-Ri of Crash Landing on You (CLOY) for a day when she visited the set of the K-drama series on February 11, 2020.

A Pinoy K-Drama lover since 2009, the 29-year-old blogger said it was one of the most unforgettable and kilig moments of her life.

Like Se-Ri—the lead female character of CLOY who landed on North Korea through a paragliding accident—Mee's visit to the set came as a surprise.

She narrated it in an interview with PEP.ph (Philippine Entertainment Portal) via Facebook Messenger on February 20, 2020.

Mee said she learned about the place on February 10, when a Korean man posted a photo of it on Instagram and the Korean website Naver.

"I asked him where is that place, then I showed it to my Korean husband.

"He said it's far away from our house," she recalled.

Although Mee discovered the exact location of the set just recently, she had been dreaming to go there since she started watching the series.

Right then and there, Mee's husband drove her and their one-year-old child to 141-1 Janggok-ri, Gonam-myeon, Taean-gun, Chungcheongnam-do, otherwise known as the village where CLOY lead male character Captain Ri Jeong Hyeok resided.

The village was portrayed to be in North Korea, but according to Mee, it was actually in South Korea, just a three-hour drive from Seoul.

Mee posted photos of her surreal fangirling moment on her Facebook blog, Mee in Korea, the day after her adventure.

Although Mee's hour-long tour of the site happened when the cast already finished shooting, she still felt lucky.

"Hinimas ko nga ang gate at yung bike niya. Haha," she said in the comments section of her post.

She also uploaded a video that could serve as a virtual tour of the area.

Aside from the dreamy feeling of standing where her idol was before, Mee felt proud to be the first Filipino to visit the set in Korea.

If you're planning to fly to Korea and visit the same set location of CLOY, Mee posted a heads-up on her blog on February 15: "Yesterday, February 14, some fans were not allowed to go inside this filming location since they said it's closed already, but some are lucky to go inside this village...

"I really hope that they will open it again so you can also experience what I experienced and feel 'kilig' when you see this North Korean village while remembering those scenes in the drama."

FANGIRL MEE AND HER K-DRAMA adventures

Visiting filming locations had been an annual event for Mee since 2015.

She told PEP.ph, "April 2015—that was the first time I visited Korea and that's the start of visiting K-Drama locations.

"After that, I fly here to Korea every year until I lived here last 2018."

Aside from the North Korean village of Crash Landing on You, Mee had visited filming locations of other popular K-dramas.

"I visited some filming locations, such as My Love from the Star, Goblin, Descendants of the Sun, Legend of the Blue Sea, Weightlifting Fairy, I am not a Robot, Sky Castle, Touch Your Heart, and many more."

Like any K-drama fan, Mee didn't dare miss any opportunity to meet her favorite stars.