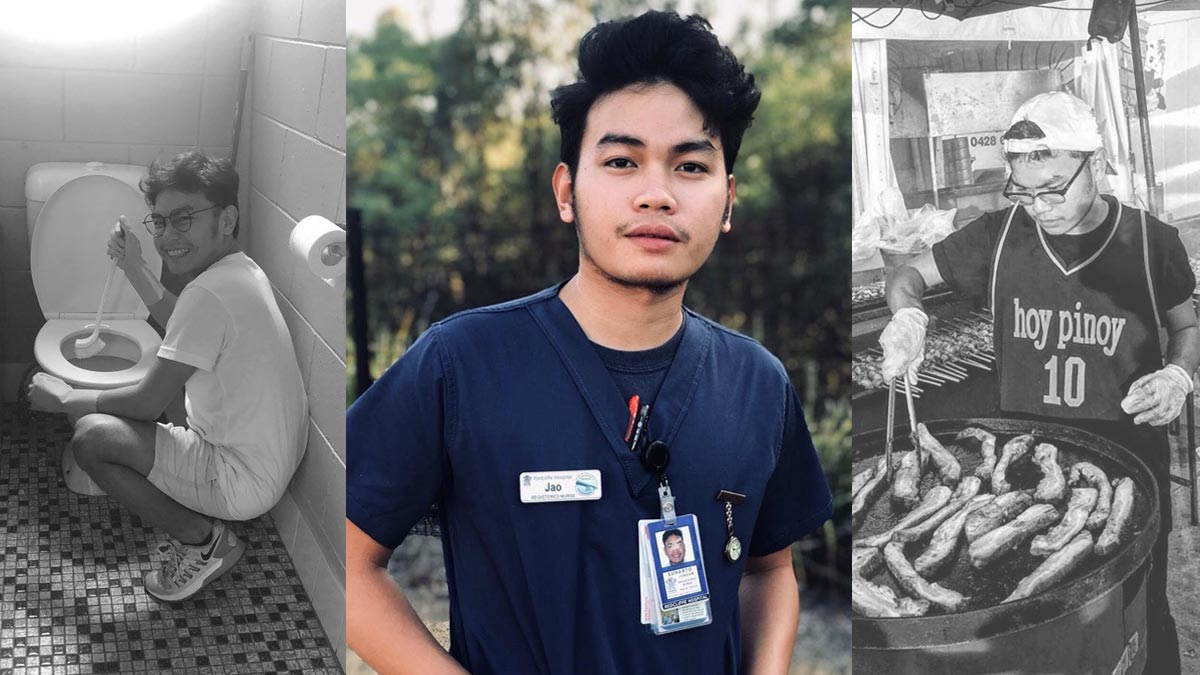 Jao Jundam, a 2015 board topnotcher, has beaten the odds to become a registered nurse in Australia. Not even the scare of COVID-19 can stop him from heeding his call of duty.
PHOTO/S: COURTESY OF JAO JUNDAM

Millions of medical health workers are risking their lives every day because of the COVID-19 outbreak.

Filipino nurse Suharto Jundam, however, wouldn't have it any other way.

Suharto, or "Jao" to his friends, was the seventh placer in the 2015 nursing board exams.

Despite being a board topnotcher, Jao had worked as a toilet cleaner, fish vendor, "barbeque boy," and waiter.

It was only after three years of struggling in these odd jobs that he was finally able to practice his profession as a registered nurse in Australia.

The Sulu-born nurse recounted his journey in an interview with PEP.ph (Philippine Entertainment Portal) on March 21, 2020, via Facebook Messenger.

According to Jao, it started after he graduated from Manila Tytana Colleges and took the board exam shortly afterwards.

"It was also in the same year when I first moved to Australia just to get a glimpse of how it feels like to live here [Australia]. I was undecided pa kasi if I’ll study nursing in AU or proceed to med school in the Philippines."

He continued, "I came back to the Philippines in 2016.

"I had to do a one-year conversion course at the University of Canberra."

Living in Canberra City was not easy for Jao.

"I lived with a Filipino family in a shared house, so I had to pay rent and share expenses din.

"I had to take on many odd jobs to help my family pay my expenses.

"Even though my tita, Mommy Yaya—who has been living in AU and is really supportive of me—handed me her debit card so that I can buy whatever I need, I told myself that I’ll try to earn to support myself, self-sufficiency kumbaga." 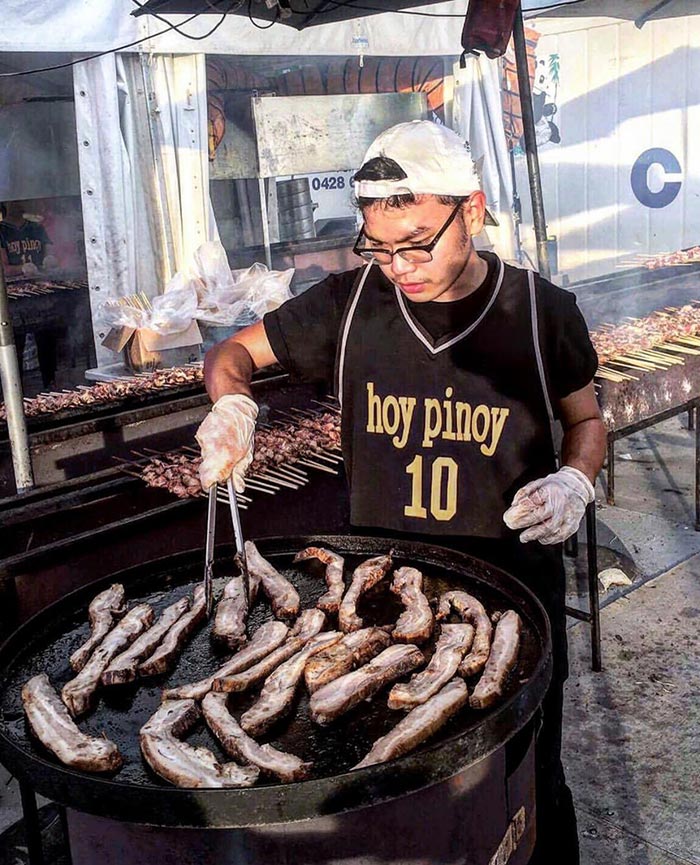 Because he still didn't have the license to work as a registered nurse in Australia, Jao was compelled to take any job available to him.

"I worked for two weeks as barbeque boy, then nine months sa fish market, more than one year din as a cleaner.

He wrote, "I [had] to walk for one hour in the freezing winter morning of Canberra just to work and sell fish in Belconnen market... I also had to fry liempo under the blazing hot summer of Canberra during its annual Noodle Markets.

"Yes, I was also a barbeque boy, and a waiter, and a personal care provider, and a cashier, and many more."

With his meager salary, Jao was "mindful of the number of meals" he ate in a day.

"I had to cook two ulams, which were often sinigang and tinola, because they’re the easiest and cheapest to cook.

"Once I have cooked them, I separate them in containers [equivalent to] three a day, so that it will suffice for a week.

"I also remember buying a five-dollar cake and slicing it in seven so that I can only eat one slice per day," he stated. 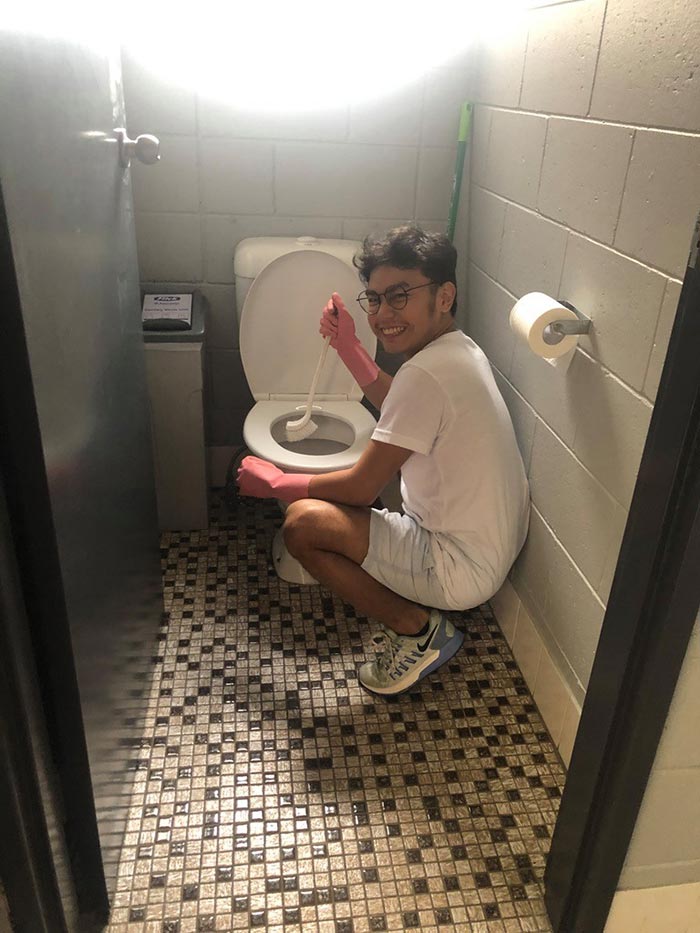 While Jao was struggling to finance his daily expenses, he was also experiencing several setbacks in the university.

He detailed, "I had to fail multiple times in Uni [university] due to the culture shock I have experienced while studying in Australia.

"I have even been accused of plagiarism, which put my last semester in jeopardy.

"And as an above-average student in the Philippines, my self-esteem went down the drain many times..."

But each time Jao fell, he would get back on his feet and tell himself, "Kaya ko pa. Ako pa ba?" 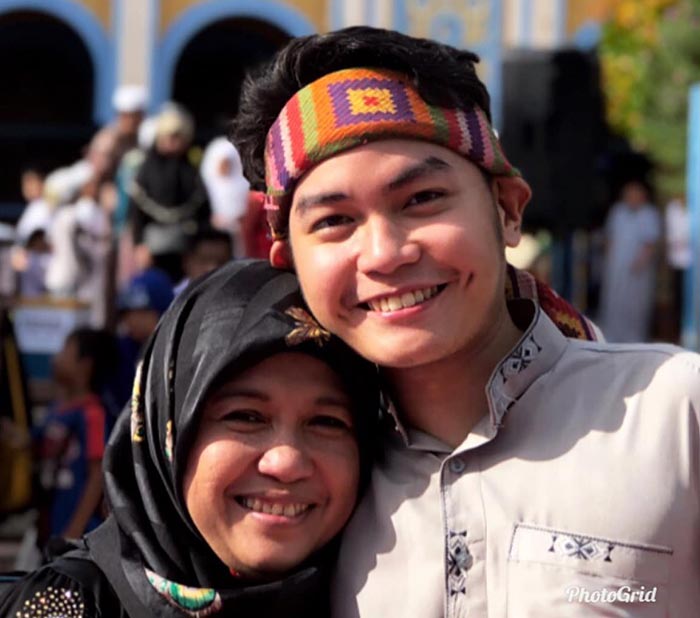 Jao told PEP.ph that thinking of his family kept him going.

"They know I’m struggling kaya super support naman sila, but I didn’t want them to be worried," he said.

Rather than dwell on his problems, he decided to spare his family the details of struggles in Canberra.

"I managed to do all of these because I have a goal to achieve, iyon siguro iyong naging motivation ko—to really endure all of those jobs and challenges.

"So Alhamdulillah (thank God), I was able to support myself naman with my tita."

After finishing his course at the University of Canberra, Jao continued to live with his tita and her family in Brisbane. 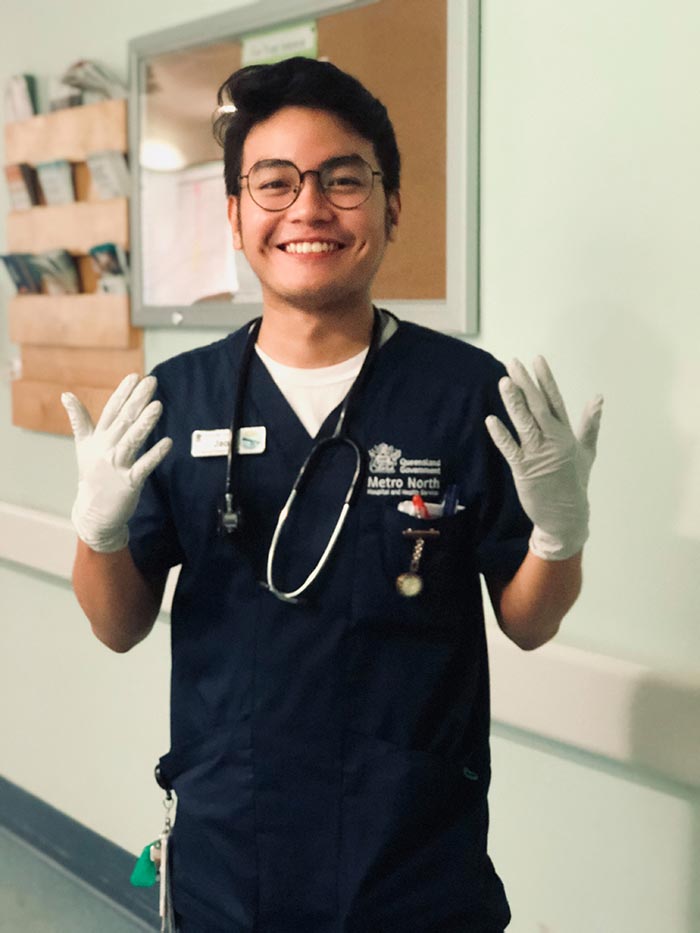 JAO BECOMES A FRONTLINER IN THE BATTLE AGAINST COVID-19

In February 2018, Jao received his certification as a nurse in Australia.

"I just feel so blessed. Not just because I’ve achieved my goal of becoming a registered nurse, but also because through all those ups and downs, my family was there with me, 110 percent!" he beamed.

Next, he took a master's degree in Acute Care Nursing at Griffith University in South East Queensland, Australia. There, he also became an International Students Ambassador. 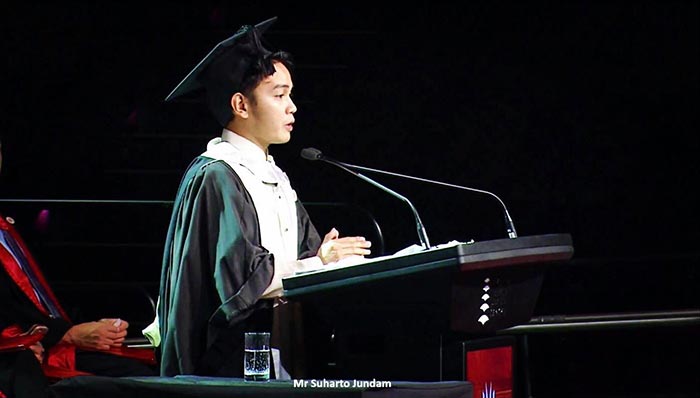 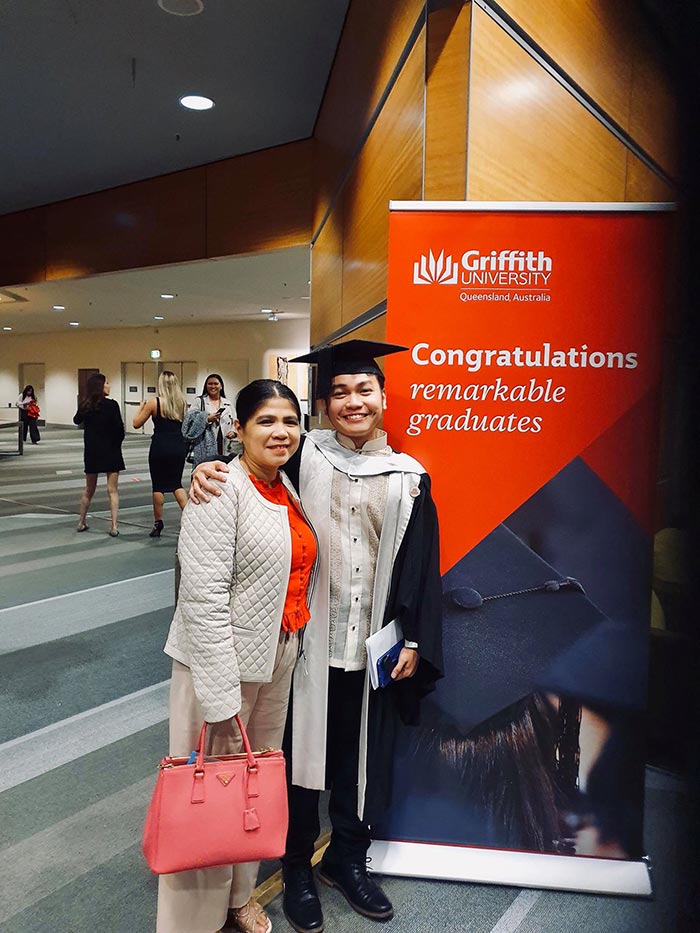 Today, Jao works in the frontline of Australia's battle against COVID-19.

Passion, along with the lessons he learned in the past, has been keeping him motivated every day.

"I work 24-hour shifting job, which didn’t really change since the outbreak.

Jao, who now lives on his own, usually spends his day-off in isolation.

He continued, "And because of the outbreak, I just spend time alone at home during my off or go to my family [in Brisbane] if mahaba-haba ang off."

Although his family and girlfriend are anxious about his first-hand exposure to the coronavirus, Jao is not backing down from his oath. 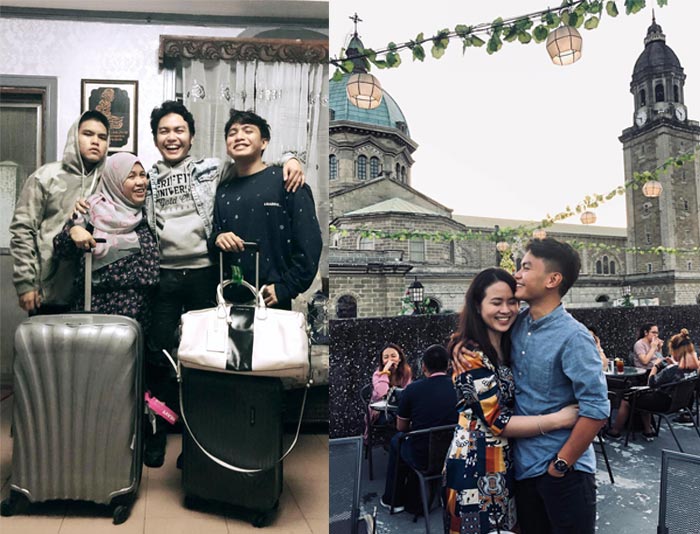 JAO'S worrY FOR THE PEOPLE back home

Jao said he is inspired to work because of the first-rate healthcare system of Australia.

He detailed, "Based on my experience, Australia has always had an efficient healthcare delivery system, not just when it comes to handling COVID-19, but also for the general healthcare system.

"At the moment, we do have enough supply, though of course, nagtitipid na rin kami especially when it comes to personal protective equipment.

"Healthcare worker-wise, presently, the supply still meets the demand, pero siyempre due to the increasing cases of COVID-19, we can expect shortage in the future." 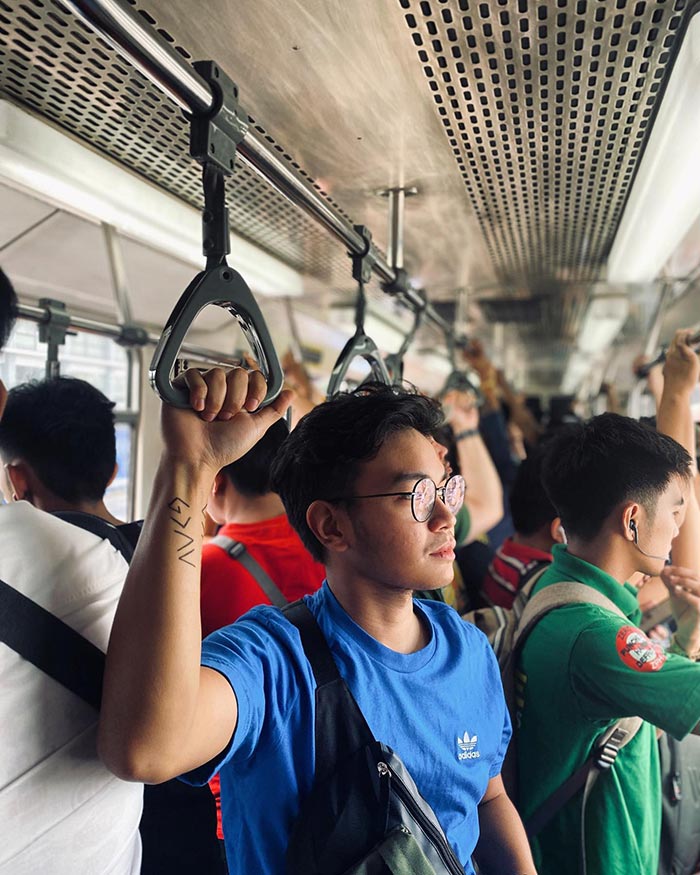 Having spent most of his life in the Philippines, the Australia-based nurse is fearful of the situation in his homeland.

He said (published as is), "I am afraid of the virus, but I am more afraid of how will our healthcare system in the Philippines cater to those who are confirmed infected with the virus.

"It's not the virus that kills the person, it's the inability to provide timely and appropriate management to those who are sick.

"The virus doesn't kill, it's the complications that occur due to prolonged illnesses following an inefficient healthcare system.

"A huge percentage of COVID-19-infected individuals recover due to the accessibility and availability of resources in [their] countries."

Still, Jao hopes that this pandemic would teach us all to be more appreciative and grateful.

"I’m looking forward to seeing the world change—na sana, when this storm has passed, we see the good things that we have in life that we often take for granted.

"Small things such as spending time with family, appreciating the food that we have on our tables (panic buying is crazy!), and even waking up alive the next day," he told PEP.ph.

"May this virus show us that we are all in this together, no race, color, gender, nationality, or any sector that separates one person from another.

"I really pray and hope that this will be over soon.

"The first quarter of 2020 has been too much for us, so sana the remaining months will be full of blessings and blissful moments na," Jao concluded.