Care to wear these 3D face masks? They are selling fast online 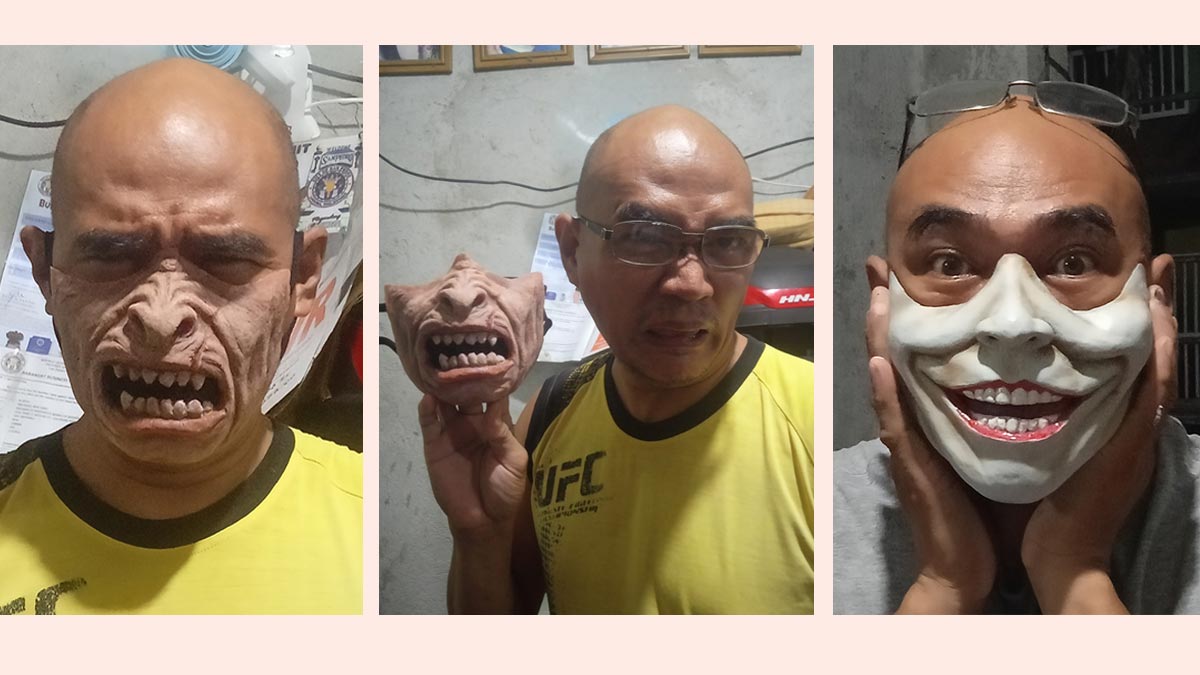 Prosthetics make-up artist Rene Abelardo is selling hideously scary face masks, if only looks can kill the deadly virus. But what the heck, let's have some fun.
PHOTO/S: Marianne Abelardo / Hand Crafted Character Mask on Facebook

Prosthetics make-up artist Rene Saret Abelardo is showing a fun way of wearing the requisite face mask in this time of COVID-19.

Rene is an expert in creating villainous face masks—in 3D.

His daughter Marianne has been showing some of Rene's masterpieces on her Facebook page, and one photo that she uploaded last May 31 enthralled netizens.

It shows her father wearing a mask that looks like the open jaw of a furious man.

Rene recounted how his business started in the following interview with PEP.ph (Philippine Entertainment Portal) on June 16, via Facebook Messenger.

The 50-year-old artist started making prosthetics or artificial body parts in his teen years under the mentorship of film and special effects director Maurice Carvajal.

Rene told PEP.ph, "I started working on prosthetics since I was 17 years old. I was a practicing painter and sculptor then.

"I was recommended by my brother to his best friend Maurice Carvajal who, at that time, was a master of prosthetics.

"My first project was a King Kong suit for the commercial of Emerald PVC.

"My next project, still under Maurice Carvajal, was an ape full-body makeup for a character in the movie OG Must Be Crazy starring Dolphy and Babalu."

Rene's artistry and thorough training led him to GMA-7's art department where he was assigned to do prosthetics for several Kapuso shows.

He recalled, "I've done character make-up for Michael V in Bitoy's World. I made him look like an ape from Planet of the Apes." 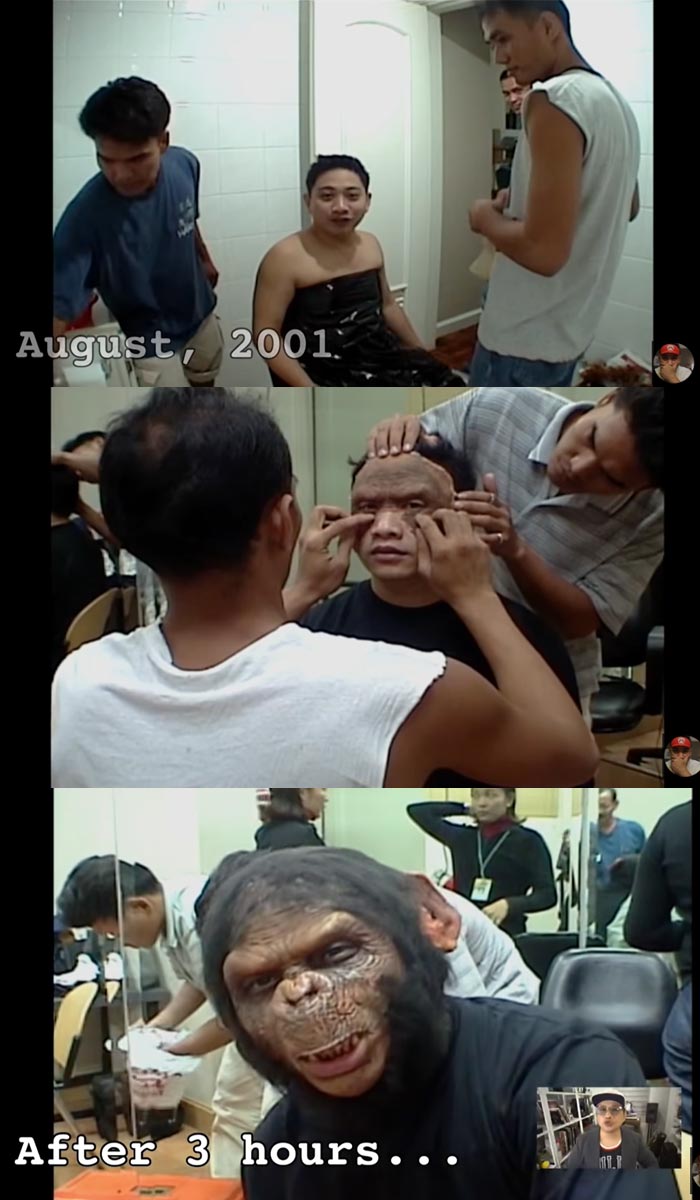 He crafted the mermaid tails for Marinara and different costumes and make-up for Daig Kayo ng Lola Ko.

Rene was also the creative genius behind the costumes of some iconic Kapamilya characters.

He conceptualized and fabricated the mermaids' tails plus the costume and make-up of the villain Dugong, in the fantaserye Marina. 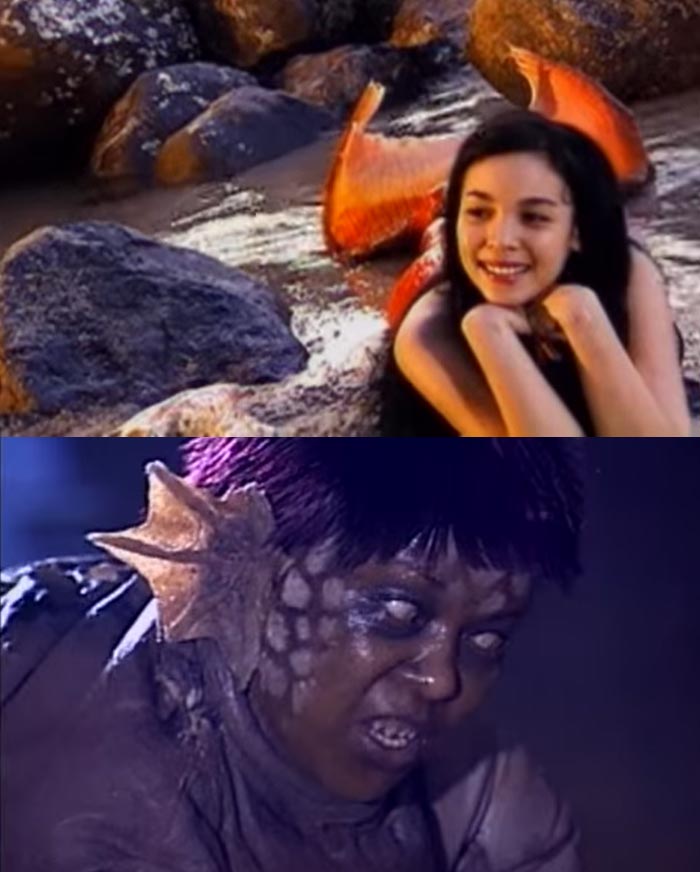 Rene was the one who created Piolo Pascual's merman tail in his Wanspanataym episode .

He also made Anne Curtis' face seem wrinkly and rough when she played the Kampanerang Kuba.

it's safe, quality-made, and fun

Now that he's spending most of his time at home, Rene decided to turn his craft into business and, as well, to make the pandemic scenario less grim.

He said, "I just like to level up the mask that we're wearing to bring good vibes to people and also to make a little money, if possible."

Rene and his daughter Marianne were encouraged to fast-track the launch of the online business on May 31, the same day their post went viral on Facebook.

Named Hand Crafted Character Mask, the business is being run by Rene, his children, and their friend Elizabeth.

He said, "I do the actual production and budgeting. My son Rainer and daughter Marianne also help as sculptors.

"Facebook inquiries are handled by Marianne and her friend Elizabeth Cantero."

Rene guaranteed the quality of their products, "They're made out of flexible plastic, and handcrafted starting from sculpting, molding, to copying.

"The only machine we use is airbrush. It takes about two to three days to finish one mask."

Rene also assured they've been stocking up on supplies to ensure continuous delivery once they start rolling them out.

He said, "Right now, we are overwhelmed by the size of the orders from netizens.

"We are still building our stocks right now. Hopefully, we can deliver within or outside Metro Manila this week."

The prices of Rene's masks start at PHP300 and vary according to design.