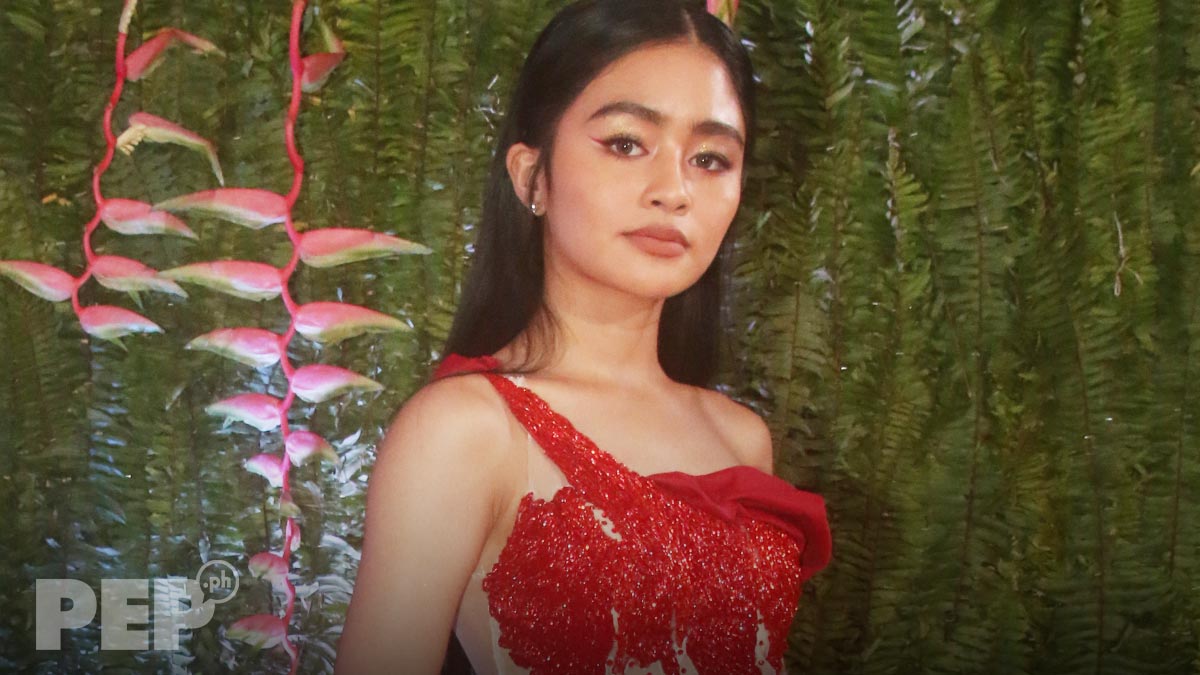 Vivoree Esclito rocks an unfinished Filipiniana gown at the ABS-CBN Ball held on Saturday night, September 14, at the grand ballroom of Shangri-La at the Fort in Bonifacio Global City.
PHOTO/S: Mark Atienza

Vivoree Esclito proved to everyone that she can rock anything she wears on the red carpet. The 17-year-old former Pinoy Big Brother housemate stood tall at the ABS-CBN Ball 2019 wearing a sparkly red gown by Dominique Dy.

The Star Magic talent's gown, however, was reportedly unfinished.

Vivoree attended the Kapamilya network's annual event with on-screen partner Charles Kieron on Saturday night, September 14, at the grand ballroom of Shangri-La at the Fort in Bonifacio Global City.

In a series of tweets from September 16 to 17, her stylist Van Mercado commended the Kapamilya star for keeping her cool despite the fashion mishap.

She wrote, "Shout out to my muse @vivoree who never threw tantrums & never complained despite yesterday’s mishap.

"She even said she just wanted to make everyone proud whatever happens. My admiration & respect for you multiplied a thousand times.

"You’re such an inspiration!"

The celebrity stylist also thanked Vivoree's fans for giving her words of encouragement after what happened.

Ven tweeted, "And grabe, Vivoree and KV fans are the sweetest— kung ibang famdom siguro bugbog na bugbog ako ngayon— I got nothing but messages of encouragement and love.

"Thank you all. This would be my last tweet regarding yesterday’s issue. Moving on! AJA!"

Van also shared a photo of how Vivoree's dress was supposed to look.

She wrote on Twitter, "This was the sketch presented to us. It was 'Modern Filipiniana.' We did 2 fittings. I did follow up every day."

An unfortunate thing happened a day before the ball and Van said Vivoree's gown got damaged.

She added, "Apparently the day before the ball, the heavy beadwork damaged the fabric & the designer had to do the top part all over again and consumed so much time."

On a separate tweet, she continued, "We weren’t informed about the severity of the damage and everyone was confident the gown will arrive 'finished and polished' and on time for the ball.

"So let’s all stop these made-up stories & end this issue."

In an interview with PEP.ph (Philippine Entertainment Portal) via Instagram, the stylist revealed the inspiration behind Vivoree's red carpet look.

"The bottom part was inspired by the humble 'patadyong'—a loose wrap around skirt worn by Filipina women particularly in the Visayas region during the pre-Spanish era.

"So it really looked like Vivoree just tied it around her waist. The gradient red beadwork on her top should look like blood (but wasn’t achieved really).

"It symbolizes someone who just came from a battlefield and survived looking bloody."

One Twitter user edited Vivoree's red carpet photo and showed how the dress would have looked like if it was finished.