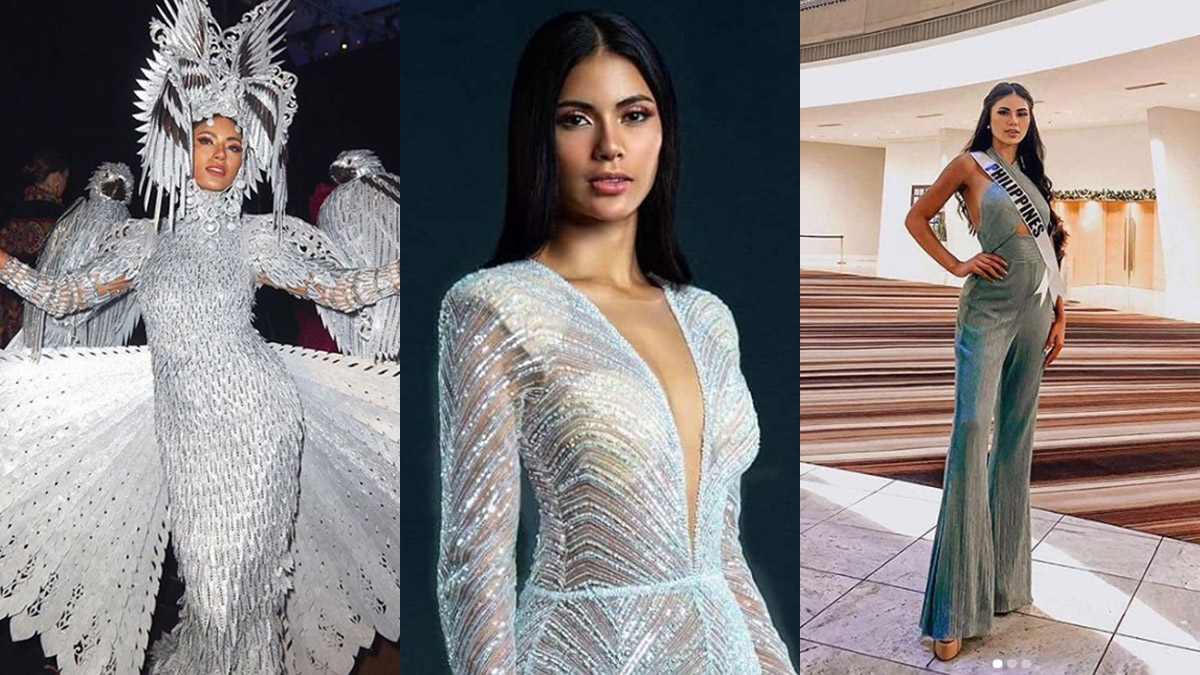 Gazini Ganados is coming home without the Miss Universe crown, but when she was going for it during the compeition, she shone as one of the most stylish among the beauty queens who vied for the Miss Universe 2019 title.

PEP.ph (Philippine Entertainment Portal) had a quick chat with Oli Sara, one of Gazini's stylists, about the beauty queen's best fashion moments in the entire pageantry of Miss Universe 2019 in Atlanta, Georgia, in the United States.

Two of Gazini's most memorable fashion moments happened during the preliminaries of the competition last December 6 (December 7, Philippine time).

Donned in creations by the Cebu based-fashion designer Cary Santiago, Gazini shimmered in gold in the evening gown competition and dazzled in her Philippine eagle-inspired ensemble in the national costume parade.

Oli said one of his personal favorites was Gazini's arrival outfit, an orange jumpsuit created by Jun Ador, when she landed in Atlanta.

He said, "It was so beautiful, bold, structured and meaningful! I had to commission the great Dr. Jerome Navarro of Felizo in Bulacan to do the phoenix brooch she used for that, the symbol of the city of Atlanta."

At the pageant's photo shoot for Chi, Gazini was draped in a red-and-pink Rajo Laurel dress, another of Oli's favorites.

He said, "It was so striking they saw Gazini’s modeling prowess!"

Gazini stood out in a fuschia pink feathered dress, also designed by Jun Ador, when she watched with the other candidates the circus show Volta by Cirque du Soleil at the Atlantic Station on Wednesday, December 4.

Oli told PEP.ph, swooning, "The cameras gravitated towards her. I think that was a moment!

"Most of the candidates wore long gowns for the show, but she opted to wear this knee-length, bead-less dress! That was quite daring."

Another of Oli's favorites, a vintage Cary Santiago dress that Gazini wore at a Miss Universe press junket last December 5 (December 6, in Manila).

He exclaimed, "She brought high fashion couture at 7 in the morning!!

"And it was the first time she sported her signature mid-part straight hair!! She knew when to lay out the winning card."

Later in the same day, Gazini changed into a pink ruffled dress by Philipp Tampus for the press launch of the newly designed Miss Universe crown, the Power of Unity Crown.

On December 4, Wednesday, Gazini wore a Barong-inspired ensemble, also by Jun Ador, at the preliminary interviews.

In another side event, Gazini wore a trench coat from Kandama, which was fully handwowen by the artisans in the Julongan village of Kiangan, Ifugao.

She draped it over a red-feathered dress, a look styled by by Qurator Studio.

In an Interview on November 30, she wore a monochromatic dress designed by Chris Nick.

For a sponsor event later that day, Gazini changed into a black jumpsuit with ethnic details designed by the House of Victoria Emporium. For this look, Gazini was styled by Kenneth Ramil.

During the pageant's rehearsals last December 3, Gazini was spotted wearing a jumpsuit by Steph Tan Couture.

For her final look at the Miss Universe pageant, Gazini wore a crystal-embellished jumpsuit from the House of Victoria Emporium.

According to Oli, Gazini brought 11 pieces of luggage to the Miss Universe pageant.

He told PEP.ph, "In our mind, and during the planning process, we were conditioned that the pageant would run for about three weeks; however, it was later announced that it would only be for 10 days!

"To be honest, we had so much clothes! haha! She left Manila with a total of 11 huge luggage."

Oli said Gazini was firm in her decision to feature creations by Filipino fashion designers and showcase the country's exquisitely hand-woven fabricss.

The celebrity stylist said, "The direction from Gazini herself was clear, she wanted to show the best of the Filipino to the world!

"We incorporated bits and pieces of local fabrics, mixing them to make it modern and now!"

Oli added that Gazini was very much involved in the planning of her outfits.

He said, "Gazini was 101 percent hands-on! To be honest, she gave us a deadline.

"'By this time all clothes have to be in, multiple fitting sessions, editing, pairing with accessories, etc!' Or, 'We have to be shooting them by this date!'

"She worked tirelessly with stylists and designers, myself... plus a huge support system in Cebu...!

"Prior to flying in Atlanta, Gazini herself scheduled dates to shoot her clothes. So we had enough time to look at each one closely. We had time to assess and edit!

"She has a lookbook, it was so organized that each look is laid out with corresponding accessories, hindi sya malilito... so it’s a bit easier already."

He added that when preparing for an event, Gazini would have her outfit and accessories all laid out the night before.

"She’s that organized!," Oli said, explaining she wanted the clothes to be the least of her worries in the morning as she got ready for another day in the Miss Universe competition.