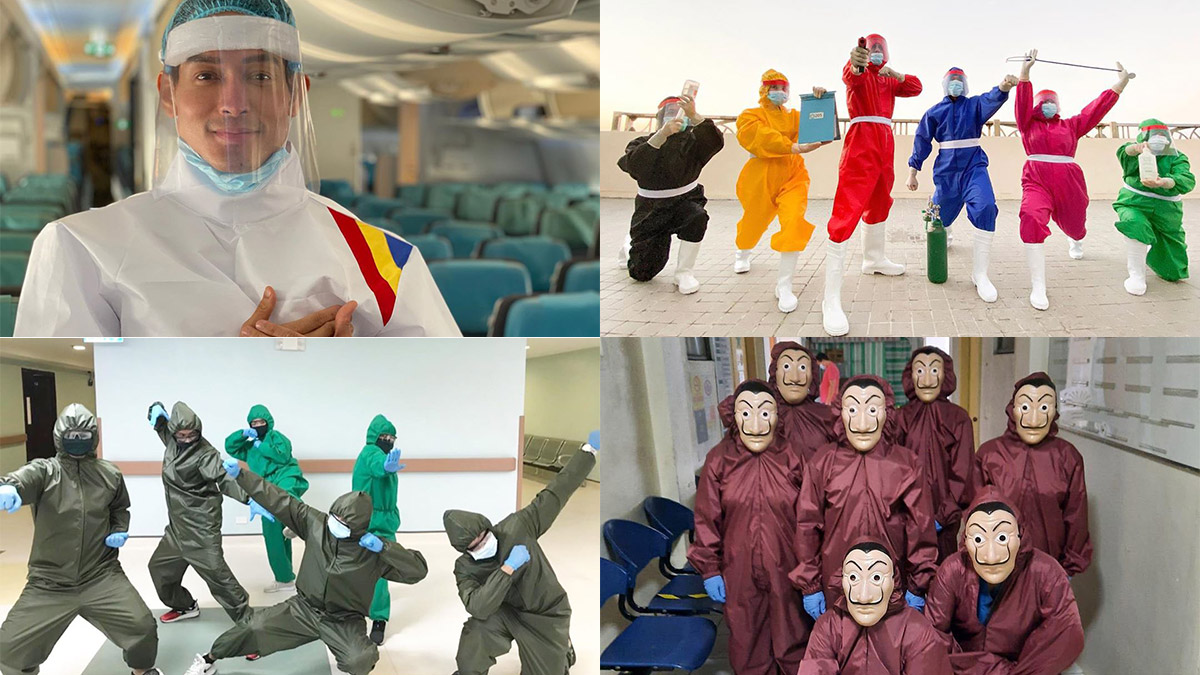 The fashion industry has stepped up, madly and wildly designing Personal Protective Equipment (PPE), the very thing that can keep our medical workforce alive.

PPEs cover the range of hazmats (hazardous materials suits), helmets, goggles, and other garments designed to protect the wearer from infections, as well as from physical, electrical, heat, chemical, and airborne particulate matter.

In the time of a pandemic killer virus, frontliners need these PPEs. These can spell the difference between life and death.

It was Vice President Leni Robredo who first sent out the call on March 20, 2020, to fashion designer, milliner, and corsitiere Mich Dulce. Could she help make PPEs? Frontliners were running out of these. Then the VP sent samples of government-approved PPEs.

Mich, a partner at the VP's Angat Buhay Foundation, needed little prodding. She sent out calls for help to fabric supply stores with water-repellent fabrics in stock—taffeta, umbrella nylon, poly microfiber. She also sent out calls to ateliers that still had staff and to factories with sewers and sewing equipment.

Mich told those wanting to help that they could work even from home. "If you have a sewing machine," she said, "you can help."

The fashion industry was mobilized. Business owners jumped in. Fashion portals like preview.ph right away announced the excitement going on, telling readers they could contribute "zippers and Velcro closures, if you wish."

Of course, Mich sent out the biggest plea to designer friends. It was no problem. Soon, their numbers expanded until, together and separately, they had mobilized to make thousands of PPEs.

But, true to their stock and trade, they would not produce anything ordinary.

With flourish and imagination, they poured everything into creating the urgent, life-saving protective gear. When they were done, the PPEs they released were as functional and up to code as they were stylish, colorful, unusual, and happy.

Note: Today Mich Dulce still has her Manila Protective Gear Sewing Club. She has raised, as of April 14, P792,965.95 in donations, and keeps sewing.

Take a look at some of the creations of our local designers and our fashion brands.

Edwin Tan made PPEs inspired by the colors of the Philippine flag for the flight attendants of Philippine Airlines on a special flight to Canada.

On April 14, the Canadian government organized a "sweeper," or repatriation flight, to Vancouver and Toronto to return their citizens stranded in the Philippines, and Edwin's outfit for the flight's personnel and crew was a standout.

Michael Leyva produced hundreds of colorful PPEs for medical frontliners in the country as part of his #SinulidKontraCOVID project.

In line with this, the fashion designer sought the help of Team Revel Sports, a sports apparel manufacturer, for the use of its factory in Antipolo City, where the production of at least 900 pieces of hazmat suits and thousands of face masks was made possible.

He wrote, "With all the difficulties we are experiencing now, we should never lose hope.

"Life is not all about darkness, it is also filled with beautiful colors. We will rise up together to witness the beauty in it. Trust Him, He will take care of us...

Rajo teamed up with fellow designer Mich Dulce, who made the patterns for these PPEs.

As of April 13, Rajo, whose House of Laurel launched a fund drive, has gathered PHP1,433,829.04 in donations. From this, 2,758 PPEs have been produced and donated to at least 45 hospitals around the country.

For the first batch, Jo made PPEs inspired by the gown that Pia Wurtzbach wore when she won the Miss Universe pageant in 2015: a royal blue-colored gown designed by Albert Andrada.

In his Instagram post of April 1, 2020, Jo wrote, "The House of Rubio salutes the commitment and hard work of all the medical frontliners. May our little help keep you safe and protected in this time of crisis."

He also made PPEs in canary yellow.

In a separate Instagram post in April 3, Jo wrote, "Someday we will all look at the sun again with so much hope and joy. We all know that hospitals nowadays have become warzones.

"To help uplift the selfless spirits of our health workers, we created these Canary Yellow PPEs to cheer them up like a ray of ray sunshine and sunflowers. Prayers for everyone."

Rubio's creations were donated to the Lung Center of the Philippines, Philippine General Hospital, and Meycauayan Doctors Hospital.

Adrian was able to create over 346 pieces of hazmat suits, 250 face shields, and 400 improvised face masks.

Ram said he specifically had the nurses and doctors of the Western Visayas Medical Center of his native Iloilo City in mind when he was making his PPEs.

Ram explained in an Instagram post on April 9, "Just like Tokyo, Nairobi, Rio, Denver and professor, our Doctors and Nurses are brave and courageous as well. My sincerest THANK YOU.

Aside from these, Ram also made PPEs inspired by the colors of the country's flag. Ram posted his creations on Instagram April 12, Easter Sunday.

His caption read: "These are the men and women who will never come home to hold their loved ones in their arms or to again see their sons and daughters or marvel how they grew while they were away answering the call of duty, or to see one last time their beloved country.

"This is what we must remember of this day. As we honor those who have fallen, we must always remember why they fell. Ramcouture Philippine flag inspired PPE in honor of our fallen heroes."

On April 14, the clothing brand completed its first batch of hazmat suits to be donated through the Tanging Yaman Foundation.

In a statement sent to PEP.ph, the clothing brand said it prioritized the making of hazmat suits.

Penshoppe's statement read: "Our priority is to provide suits from materials based on the approved technical requirements. We have worked with our vendor partners to source the appropriate fabric to protect our medical frontliners.

"We are currently working with Tanging Yaman Foundation to distribute medical suits to frontliners. Our focus is for the suits to be distributed to medical institutions in need nationwide.

"We are targeting to produce and distribute 30,000 suits, as well as 100,000 surgical masks. To date, we have produced and delivered almost half of our commitment."

Kamiseta also provided PPEs to frontlners at the UERM Memorial Hospital in Manila. They deliberately picked pastel and bright colors to help brighten the mood of health workers.

Part of the caption read: "We made sure that each set was made perfectly and with love. [heart emoji] They come in bright colors to bring joy and light to our heroes and lift their spirits during this time.