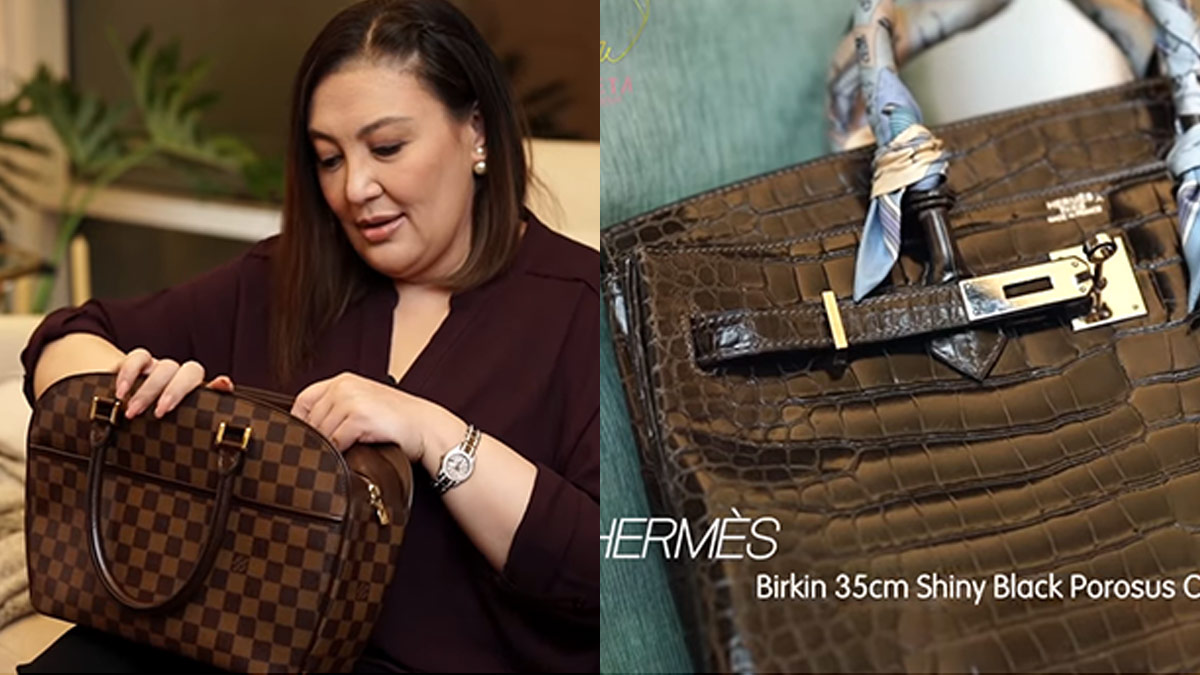 Megastar Sharon Cuneta gives a peek of her closet through a YouTube vlog, amazing her subscribers with her collection of Hermès and Louis Vuitton bags.
PHOTO/S: Sharon Cuneta Network on YouTube

After vlogging about her treasured luxury watches, Megastar Sharon Cuneta again opens her closet on her YouTube channel to show her favorite designer handbags.

In the video she uploaded last Wednesday, October 28, 2020, Sharon shared an interesting story about a particular Hermès Birkin, a 35cm beauty of shiny black porosus crocodile with palladium hardware.

The Kapamilya star said the Birkin bag became a bigger talk of the town in 2008 than the supposed marital scandal that greeted her after returning from a trip to Hong Kong.

Supposedly, Sharon had taken the trip to "cool off" following a big fight with her husband Senator Kiko Pangilinan.

It was even whispered that the couple was on the brink of separation.

The Megastar recalled in her vlog, "I did not think... I never imagined that it would be such a big deal because I had come from Hong Kong, and during that time ay meron pong chismis na kami ni Kiko ay naghiwalay na.

"So I ran off to Hong Kong with my cousins, my sisters, the Sottos and then... KC was there, too. They followed because, at first, I left alone.

"To be honest, and since it happened many years ago, talagang Kiko and I were having a problem, so I left and there was no stopping me from it.

"Nagulat ako when I saw them, and I had to keep my head down. Nagkataon, I was carrying this bag.

"And you know, on my TV show, of course, you never see me carrying any kind of bag because I'm always singing, hosting, and doing stuff like that.

"I carry bags in the movies, but usually they're really simple and they're either provided by the production department—the art department—or they pick the simplest of my bags kung ano yung kailangan ng character."

And the part about the bag?

Sharon continued, "Aside from the issue between me and Kiko being blown up, what was blown out of proportion was me carrying this crocodile Birkin bag.

"I don't know if I found it amusing or... It actually kind of surprised me because I didn't think that people would really focus on this.

"Anyway, I love this bag, and I take care of my bags." 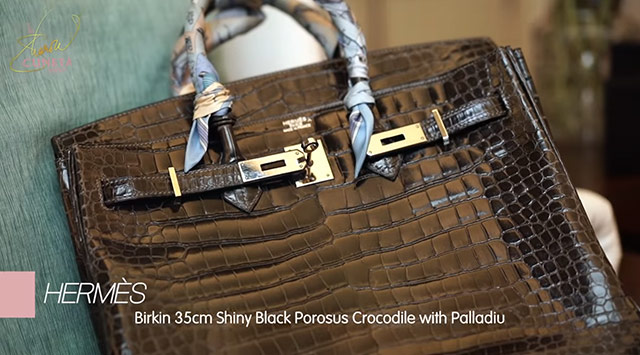 On the website of famous auction house Christie's in Hong Kong, Sharon's 2008 Birkin with the same specs is being sold at HKD250,000 or PHP1,563,336 (based on current exchange rate)

Sharon has a number of Hermès bags in her collection, including this 35cm Birkin Rose Lipstick. 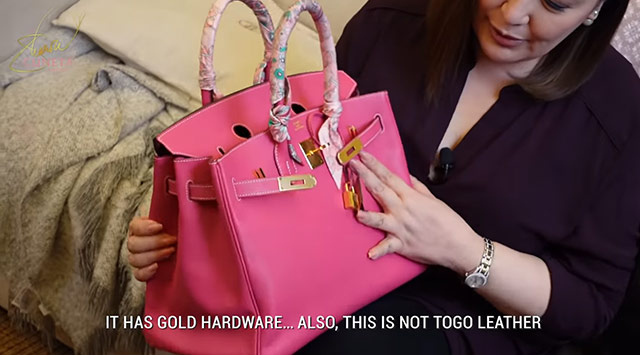 She also has another Birkin Thallase in Epsom Periwinkle leather. Thallase or Thalassa is also known as Mediterranean Sea Blue, which is deeper than Blue Jean. 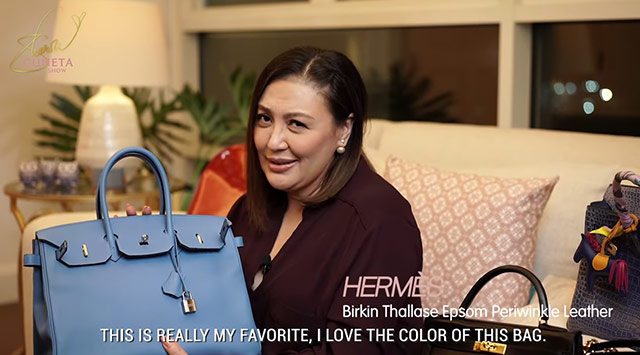 Sharon loves blue-colored Birkins so she also bought this one in Togo Leather with Gold Hardware. Based on her vlog, this Birkin could be in shade called "bleu orage." 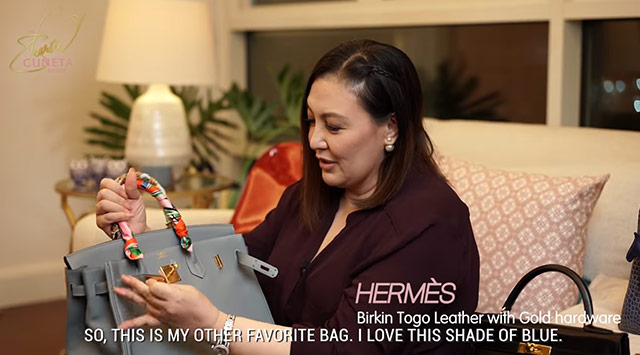 There was also her favorite black Hermès Kelly bag that she bought some 25 to 30 years ago. Sharon was proud to have kept the bag in pristine condition after over two decades. 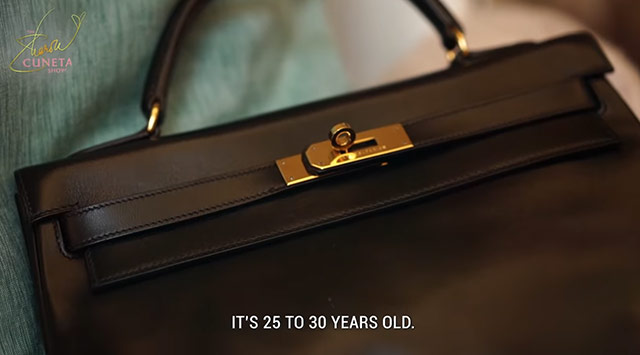 Sharon's most favorite Hermès bag is this Brighton Bleu Birkin in crocodile leather.

A second-hand 35cm Birkin in color and leather at janefinds.com is priced at USD49,995 or around PHP2.4 million.

Sharon loves the bag so much, she has put a keychain with Gong Yoo's face in it as her bag's charm. 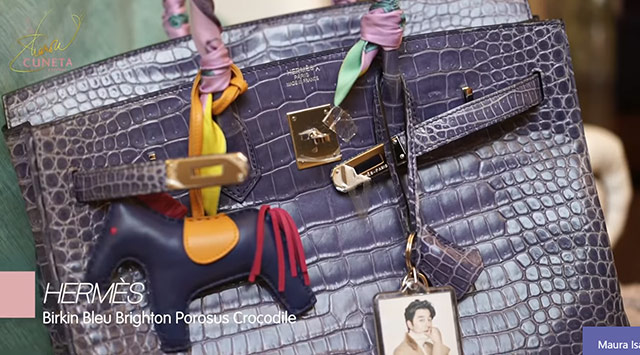 She proudly showed this vintage white Chanel bag that she bought 30 years ago and has kept in pristine condition. 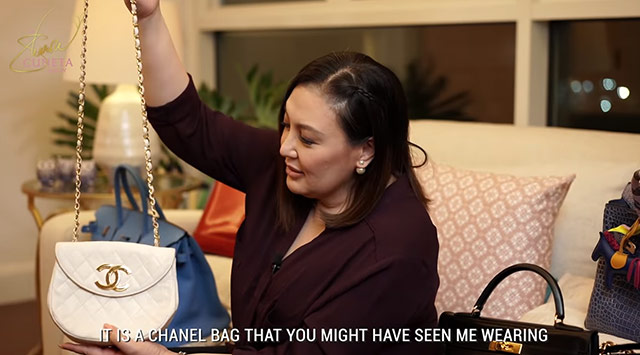 Sharon said in her vlog that she bought this Louis Vuitton Amarante Monogram Vernis Melrose Avenue during her concert tour in Zurich, Switzerland. 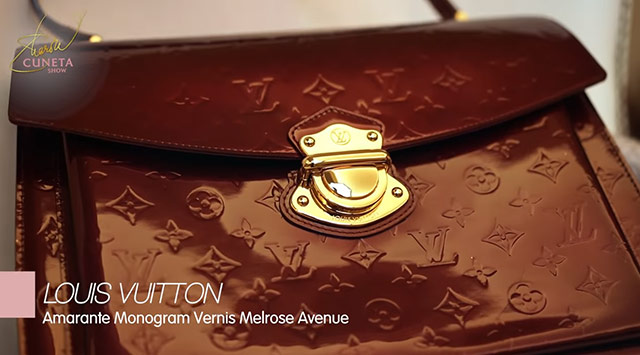 She also has a Louis Vuitton Pomme D'Amour Monogram Vernis Alma GM in her closet. At the time the bag was released, it had a price tag of USD2,855 or around PHP139,000. 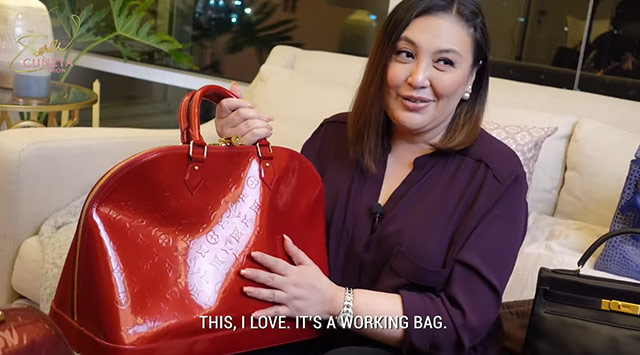 Sharon bought this Louis Vuitton Brea Purple Crocodile Leather bag a few years ago when she went on a trip to Milan, Italy. Sharon saw the bag encased in a glass and bought it because it has the "most perfect shade of deep purple." 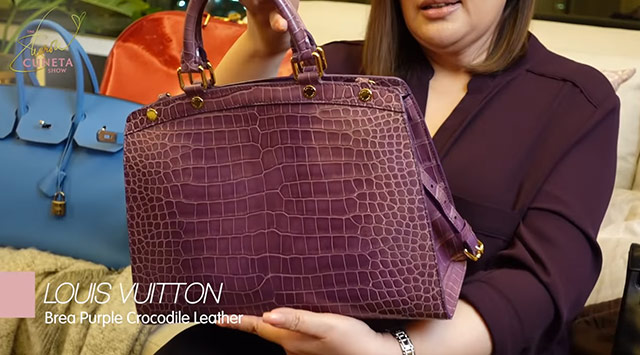 Her most memorable bag is this Louis Vuitton Damier Heirloom, which she got from her late mom Elaine Gamboa. She recalled, "It was her last bag that she used when she was rushed to the hospital until the day that she passed away." 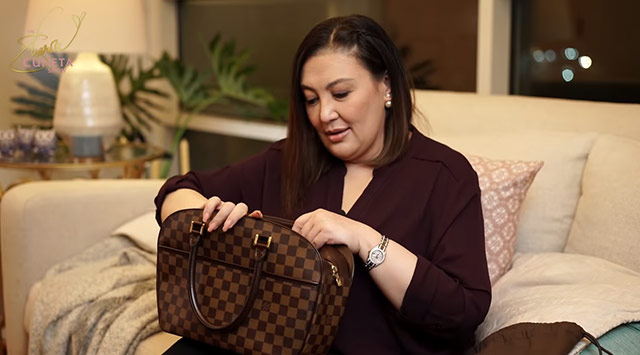