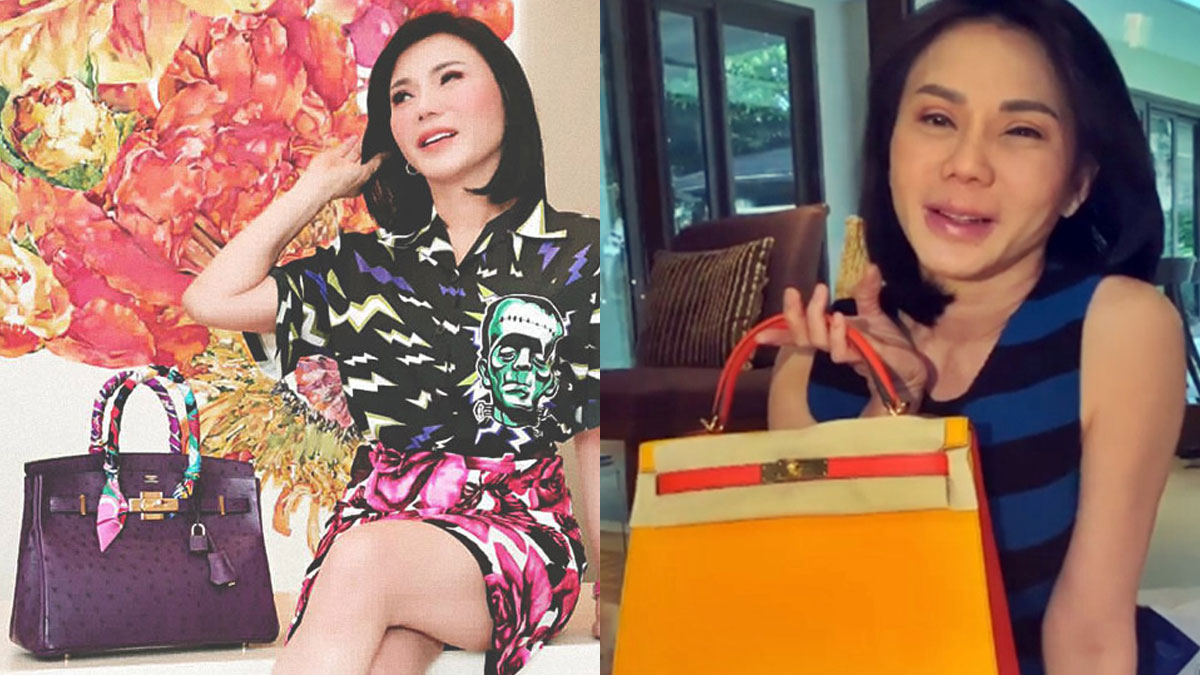 Vicki Belo has 30 pieces of Hermés Birkin and Kelly bags in her closet, some of them are rare ones.
PHOTO/S: @victoria_belo on Instagram

Celebrity beauty doctor Vicki Belo has finally given in to the most persistent request of her YouTube subscribers.

On Thursday night, January 28, 2021, she gave a virtual tour of her huge walk-in closet showing her bag collection.

And there at the very center, arranged according to colors, are her favorite Hermès Birkin and Kelly bags, at least 30 pieces all in all (yes, we counted).

In one part of the vlog, Vicki said, "I've been collecting Hermès for the last 20 years. So matagal na rin po. I love lively colors."

If you must know, Hermés only offers their Birkin and Kelly bags to their most loyal customers.

In the Philippines, it is said Hermès caters mostly to regular shoppers wtih a purchase history of PHP1 million to PHP1.5 million from any of its boutiques.

The beauty doctor shared in her characteristic way of talking, "When you go to Hermès kasi, the problem is you can buy bags but when they give you something, you know it's so funny...

"They bring you to a room, all by yourself, [they] put all their gloves... They only have one box, not like, let's say, when you go to Gucci or Louis Vuitton, ang dami right?

"Sa Hermès, isa lang yung ipapakita sa iyo. And so much ceremony. And then, when they open the box, pagtingin mo sa door, ang daming tao nakatingin din what you are getting.

Vicki, who prefers colorful bags, said, "I don't really like exotics. For one exotic bag, you can buy five of the normal bag so konti lang po ang aking mga exotic." 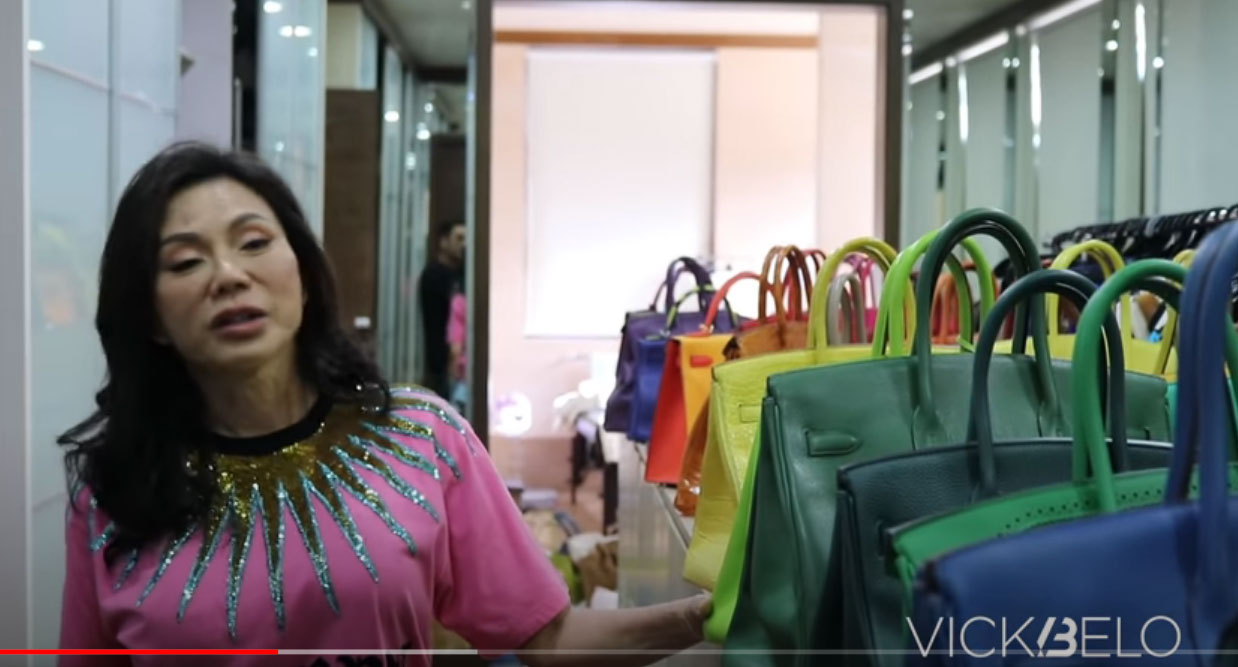 Some of her most precious Hermès are gifts from Vicki's husband Hayden, one of which is a bi-colored Kelly Sellier bag in Vicki's favorite color: purple. 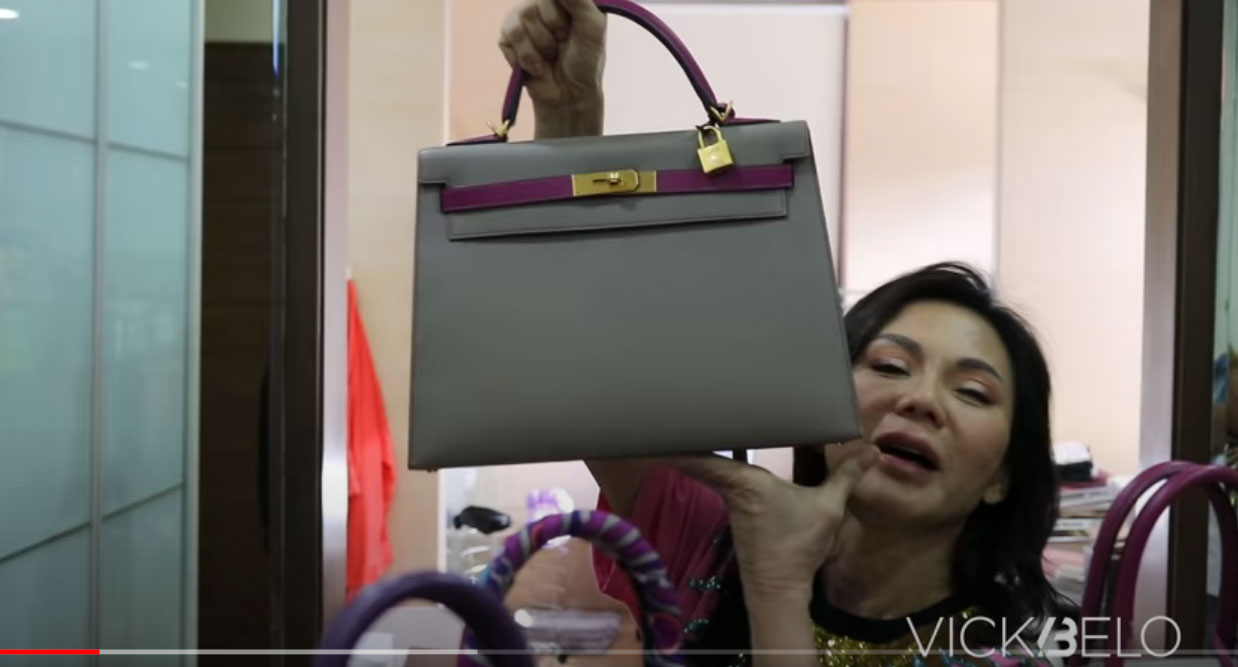 Another gift from Hayden is a customized Kelly Sellier bag in orange and amber with purple stitches that he gave her in December 2019. In a previous interview, Vicki said took Hayden a year to get one customized Kelly bag.

According to PurseBop.com, only members of the "Exclusive Hermès Horseshoe Club" are given the chance to buy a customized or a "special order" bag without charge.

The blog also mentioned that Corporate Hermès limits special orders from each of its boutiques worldwide. 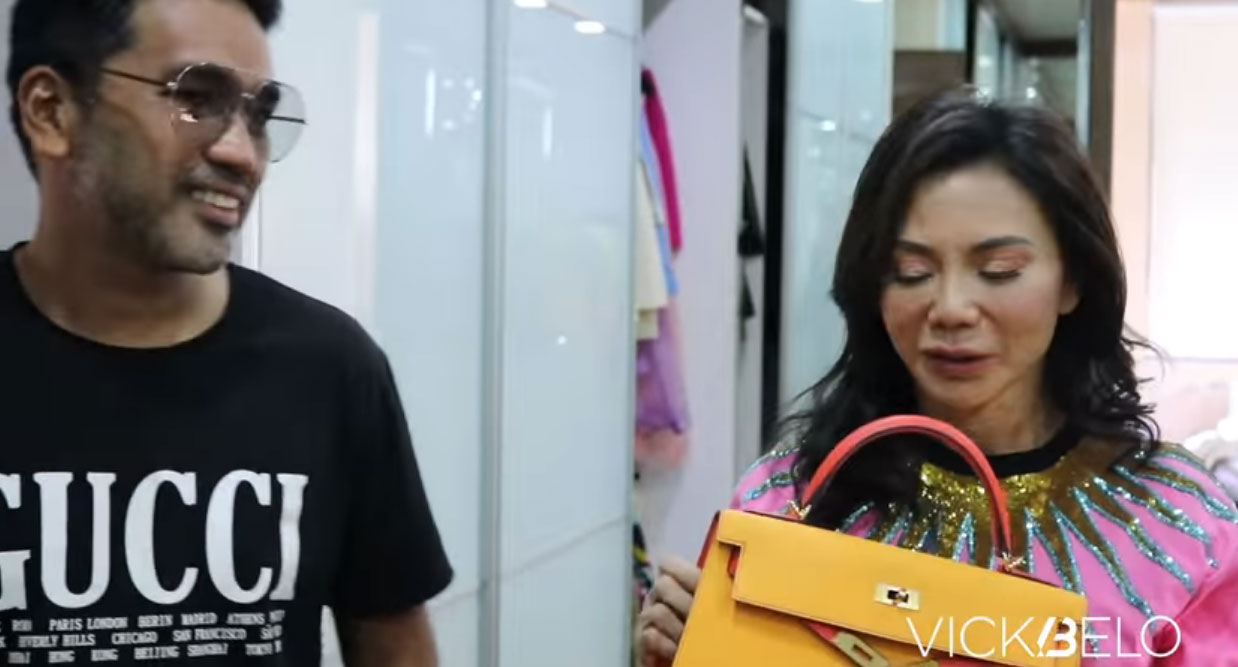 Vicki received a Touch Birkin bag from Hayden for her 64th birthday on January 25, 2020.

She said, "I don't like exotics but this is cute 'cause it's croc here, and then, yeah... It's not all exotic."

In 2018, Hermès crafted Birkins with just a "touch" of exotic leather—either crocodile or alligator—on the flap, sangles, handles, and clochette of the bags. The rest of the bag remains either Togo leather or Novillo leather.

These are considered rare pieces. An Hermès Birkin Touch 30 Black Novillo and Niloticus Crocodile leather with rose gold hardware is priced at USD38,995 or around PHP1.87 million on JaneFinds.com. 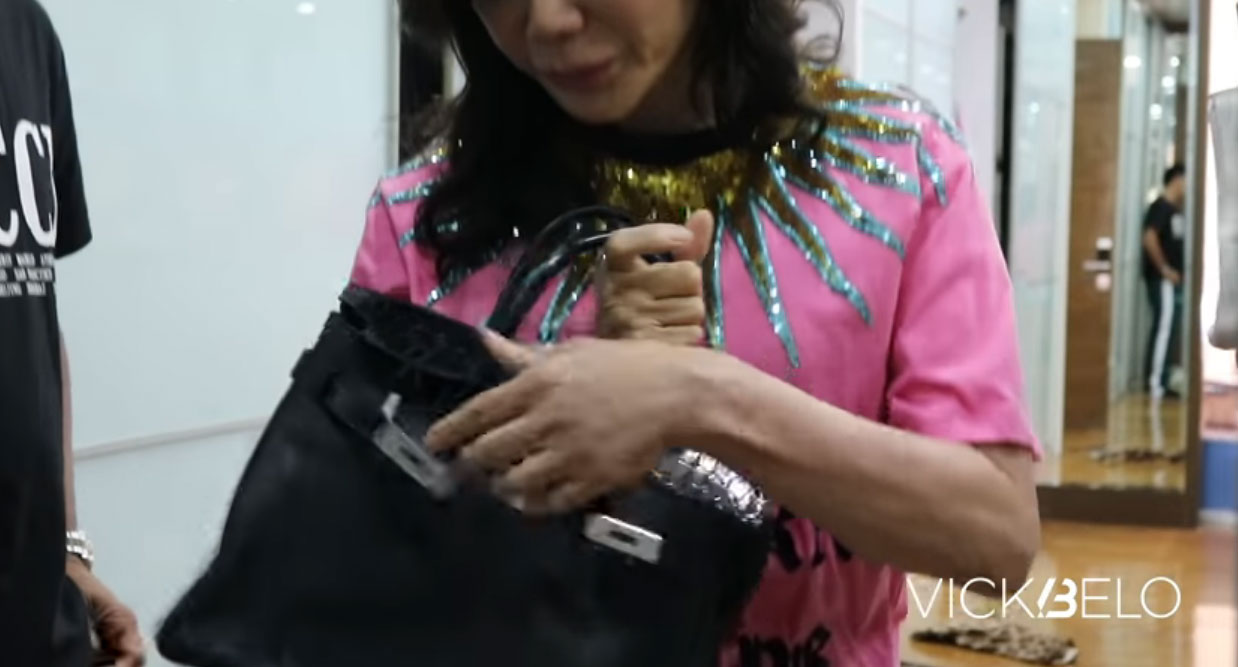 She owns two Hermès Club Birkin bags that were part of the brand's Spring/Summer 2011 collection, one has Mykonos Blue lizard stripes and the other has Rouge Casaque lizard trim.

She said, "I like unique bags, for example I like yung may stripes like that... I have this in burgundy and white kasi feeling ko doctor."

According to Tradesy.com and TheRealReal.com, these bags originally had a retail price of USD25,000 or around PHP1.2 million. 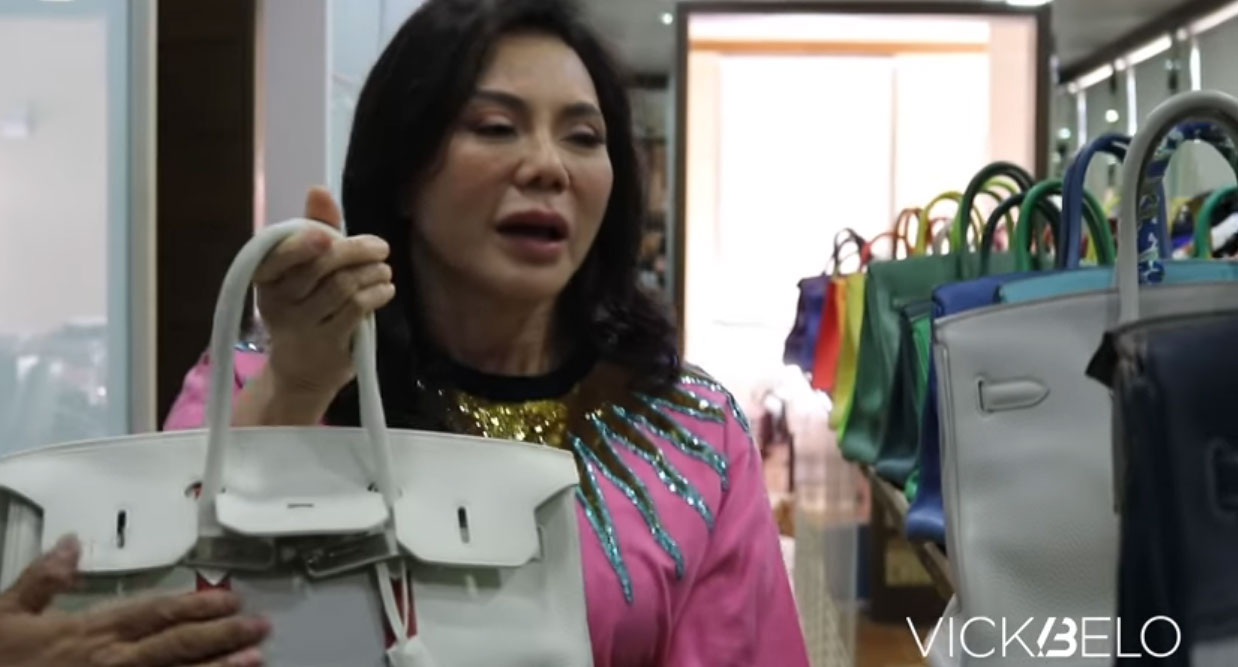 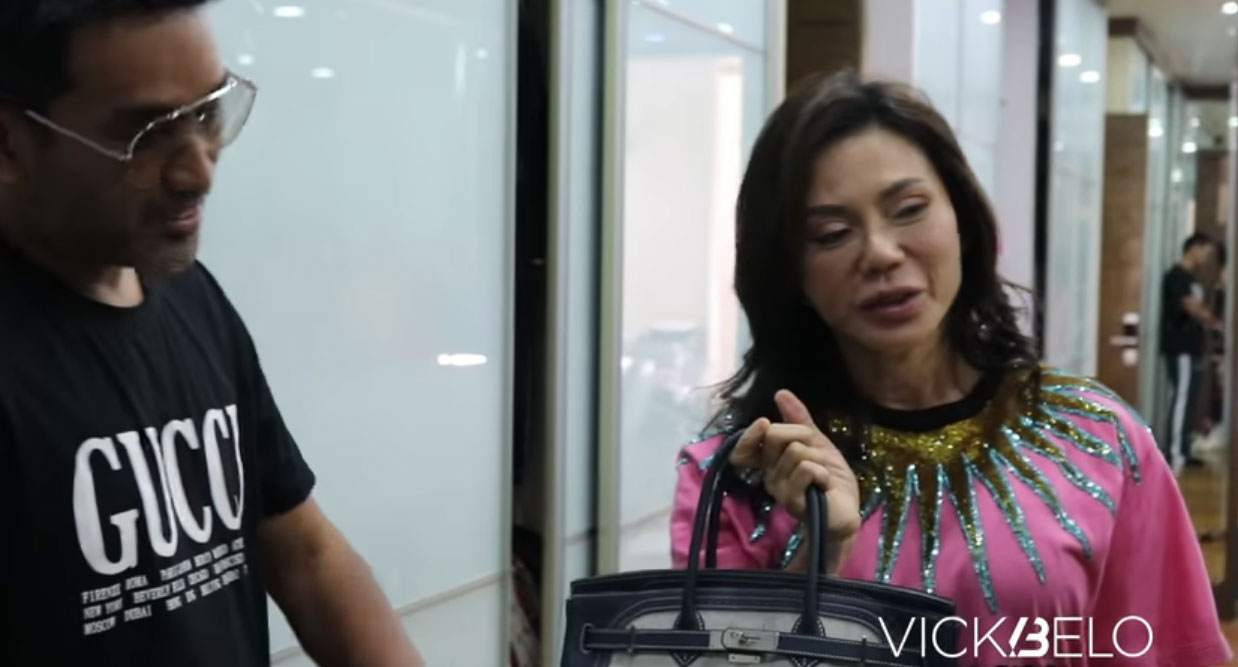