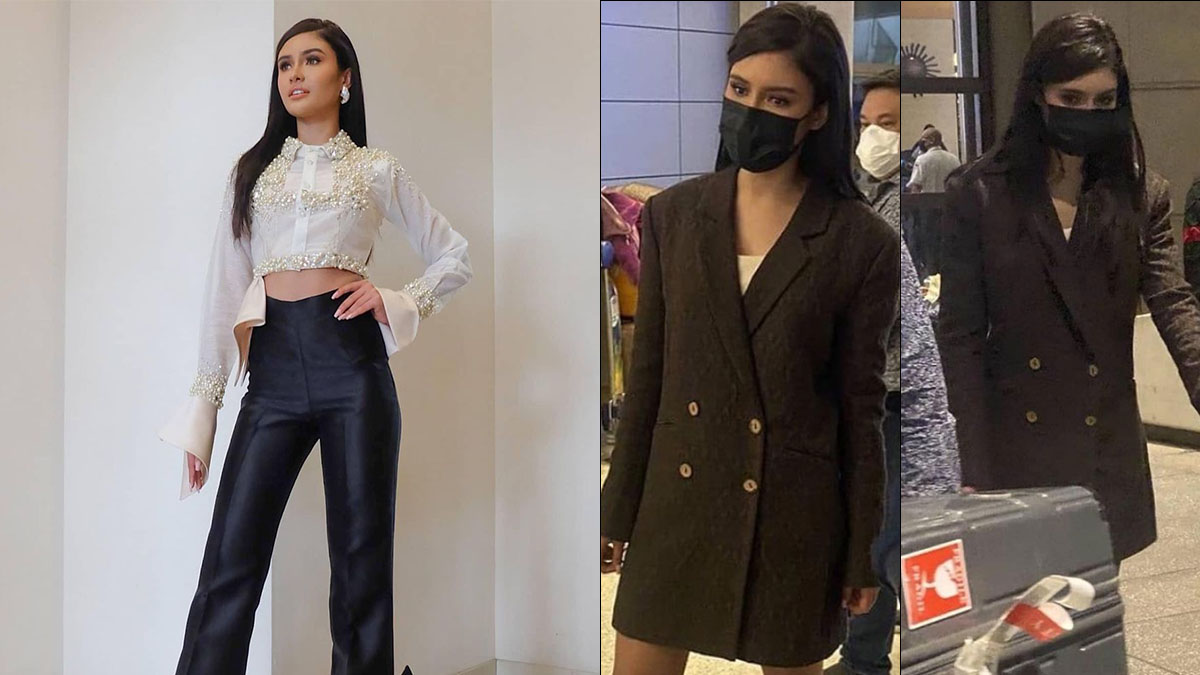 (Left) Rabiya Mateo wore a modern Barong Tagalog-inspired outfit by Chino Christopherson and Marc Rancy on her way to the U.S. for the Miss Universe 2020 pageant on Friday, April 9, 2021. (Right) Saturday, April 10, she was spotted wearing a blazer dress by Ilonggo fashion designer Nono Palmos during her arrival at the airport in Los Angeles, California.
PHOTO/S: @rabiyamateo / @heyadamg on Instagram / Stevie Angeles of ABS-CBN news

On Friday, April 9, 2021, the 24-year-old Ilongga beauty queen donned a modern Barong Tagalog-inspired outfit as she boards the plane to the U.S.

Rabiya shared the details of her OOTD in an Instagram post that day and expressed how proud she is of Filipino-designed clothes.

Rabiya's modern Barong Tagalog-inspired was adorned by hundreds of crystals, sequins, and pearls. It was made by Bacolod City-based fashion designer Chino Christopherson.

In a statement posted on Rabiya's Instagram, Chino explained why he designed a modern Barong Tagalog-inspired top for the beauty queen and said, "A woman who can pull off a 'barong' exudes confidence."

For his part, Marc said, "We want to achieve a look that is chic without losing the cultural integrity of the traditional barong."

She looked sharp and sleek in her printed blazer dress made by Iloilo City-based fashion designer Nono Palmos.

In an interview with ABS-CBN correspondent Dyan Castillejo before her departure, Rabiya thanked her stylists and all the fashion designers for letting her wear their creations at the pageant.

Rabiya said, "I'm very thankful to my stylists, Em and Rain, for helping me in packing all my clothes.

"It's really hard to do such thing pero dahil passion talaga nila ito at ginagawa din nila para sa bayan, they were able to help me.

"And sa lahat ng mga designers all over the country, mula Luzon hanggang Mindanao, tumulong po sila. They were able to give me a lot of amazing clothes."

Rabiya is currently in Los Angeles for some pre-pageant activities. She and Miss Universe El Salvador Vanessa Velásquez are also expected to participate in an event with skincare guru Olivia Quido-Co of O Skincare & Spa, one of the sponsors of the Miss Universe 2020 pageant.

Zozibini Tunzi of South Africa will pass on the Miss Universe crown to her successor at the pageant's grand coronation night happening on May 16, 2021, in the City of Hollywood, Florida.