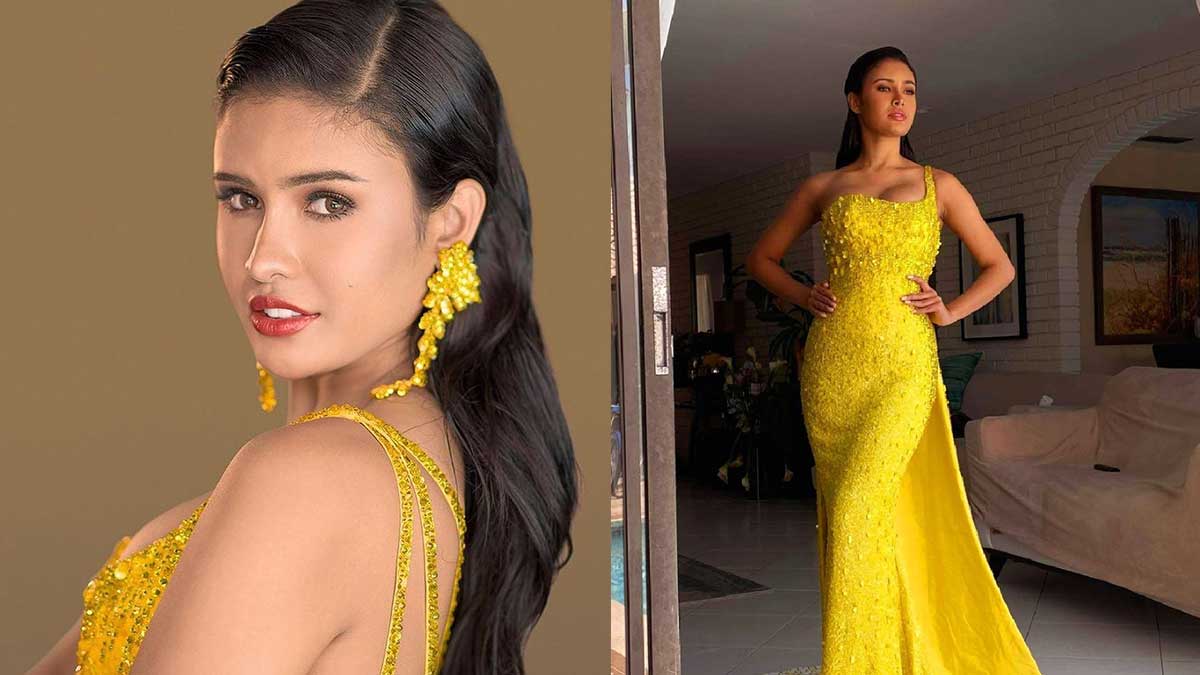 Rabiya Mateo is definitely a showstopper in her Furne One Amato evening gown during the Miss Universe 2020 preliminaries held at Seminole Hard Rock & Casino in Hollywood, Florida on Friday night, May 14, 2021 (May 15 in the Philippines).
PHOTO/S: @furneamato / @josh_yugen on Instagram

Rabiya Mateo shone bright during the Miss Universe 2020 preliminaries which was held at Seminole Hard Rock & Casino in Hollywood, Florida on Friday night, May 14, 2021 (May 15 in the Philippines).

The 24-year-old beauty queen from Iloilo donned a yellow gown made by Dubai-based Filipino designer Furne One Amato.

After the preliminaries, Furne One revealed that the Philippine Sun was his inspiration for the one-shoulder gown accentuated with hundreds of Swarovski crystals.

He wrote in the caption of his post, "The one-sided neckline tulle gown is elegantly encrusted with Citrine Swarovski crystals on the bodice cascading to the hem and cape over alabaster Swarovski components, glass beads and paillettes.

"The dramatic and fitted silhouette adds interest and pizzazz on its own.

"The cape added royalty to the gown, and its beadwork was inspired by the radiance of the Philippine sun which symbolizes positivity and optimism.

"A hope for a new tomorrow, a world with endless beauty and happiness."

Furne One also uploaded a close-up video of the back detail, the overall effect of which is similar to the rays of the sun.

In another post was a photo of Rabiya, who was all smiles during her gown fitting.

Rabiya will be wearing another Furne One gown at the grand coronation night of the Miss Universe 2020 pageant.

To complete her look, Rabiya paired her evening gown with a pair of dangling earrings from Lvna by Drake Dustin.

His Instagram post read (published as is), "Symbolizing the Sun, the celestial body that empowers our lives and gives us energy and life here on Earth. A symbol of power.

"This high jewelry piece is made of the rarest fancy yellow diamonds and highest quality of citrine gemstones crafted in 18kt white gold.

"The center studs are made with 2ct each of pear shaped rare fancy yellow diamonds that symbolizes our hard work and perseverance with rays of made of the most brilliant of diamonds mixed of pear cut diamonds and cushion shape citrine stones that symbolizes hope and our ability to shine in our darkest times.

"The dangling is centered with 4ct each of Fancy Vivid Yellow Diamonds swirled with brilliant white diamonds surrounded by rays of teardrop yellow diamonds and cushion shape citrine stones.

In a previous interview with Rabiya's stylist Ranier Dagala, he revealed that before the preliminaries, only four people were able to see Rabiya in her evening gowns.

Albert Andrada is the design council head of Miss Universe Philippines, while Jonas Gaffud is the creative director.

The grand coronation night of the Miss Universe pageant will be held on Sunday evening, May 16, 2021 (May 17 in the Philippines).