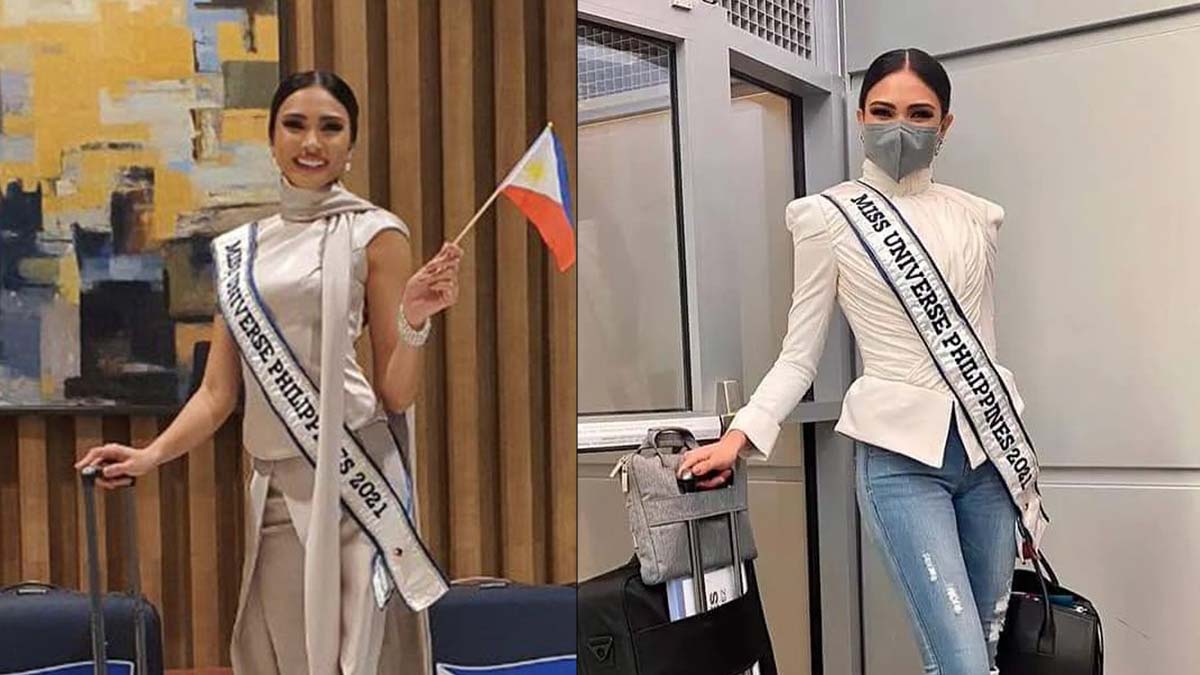 Philippine bet Beatrice Luigi Gomez has surely brought her A-game in the fashion department as she vies for the country's fifth Miss Universe crown.

The 26-year-old Cebuana model/army reservist is presently in Eliat, Israel, for the prestigious beauty pageant.

On Saturday, November 27, 2021, Bea left Manila and boarded the plane in her bespoke top and trousers designed by Francis Libiran, who, by the way, is also designing her evening gown.

In a previous interview, Francis said he didn't have a specific theme in mind when he designed Bea's dresses and gowns.

He said, "You know, dressing up Bea is such a privilege... and I really enjoyed it because I studied how Bea's personality is.

For her arrival OOTD, Bea looked like a "desert warrior queen" in her white-and-denim ensemble made by Filipino fashion designer Mara Chua.

In a separate post, Mara said the outfit was inspired by Naomi Campbell's Dior outfit in her cover photo for the American Vogue's November 2020 issue.

Mara's other inspiration was the movie Dune, an epic sci-fi film that starred Timothée Chalamet, Jason Momoa, and Zendaya among many others.

Here's her full caption, published as is: "Bea's team approached me to make a look for an editorial shoot last October.

"The idea is basically universal queen who can rock different modernized cultural outfits or thats how I understood it.

"They showed a bunch of visuals, I immidiately gravitated towards the Vogue cover of Naomi Campbell in this Maria Grazia Chuirri for dior couture 2020.

"Its the most editorial looking one which I love, and I was coming from a post Dune high that I really wanted to make a look inspired by the film.

"I did make quite a few edits, I showed her team a photo of Karl Lagerfeld's Chanel Paris meets Bombay collection back in 2012.

"I told them thats the over all silhouette and feel I wanted to achieve. I did push for a more androgynous look by pairing indian jodhpur pants instead of a skirt.

"For the top, I made the silhouette more armor like with more angled and sharp lines and square shoulders.

"I did the drapes in overlapping diagonal lines to depict sand dunes. Its kinda serendipitous in a way.

"Dune is a film that I believe parallels modern Israel and the look were going for is indeed a nod to the industrious people who built thriving and ultra modern desert cities.

"And i firmly believe we have a queen who has the unique quality to seamlessly transition between pageant and editorial that I think it would be have been a waste not to put her in something different from the usual.

"Her team loved the look so much they decided to use it for Bea's arrival in Israel. Of course styled differently since its for pageant and not editorial."

Beatrice was styled by Mikee Andrei and Rick Sotelo, and assisted by Jerald Ignacio.

Beatrice is among the 80 candidates competing at the pageant's 70th edition.