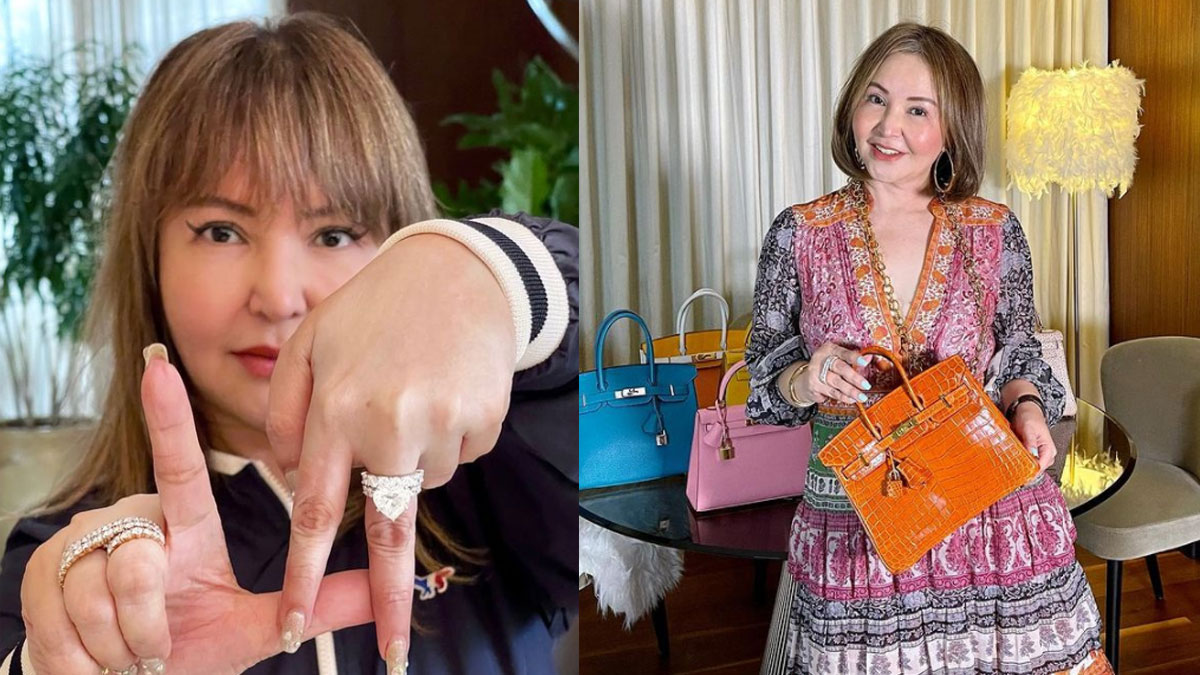 Small Laude's Instagram feed, which shows her stylish OOTDs, is an eye candy for fashionistas.
PHOTO/S: @smalllaude on Instagram

Who is Small Laude?

She is a 53-year-old socialite and sosyal content creator whose vlogs on how the rich and famous live are popular with netizens.

Small created her channel in 2013, but it was only during the pandemic when she started vlogging religiously through the encouragement of ABS-CBN newscaster Karen Davila.

In her parody video on YouTube of Vogue's "73 questions," Small has said that given the chance to be president of the world for one hour her mandate would be for people "to subscribe to Small Laude vlog, and like everything." 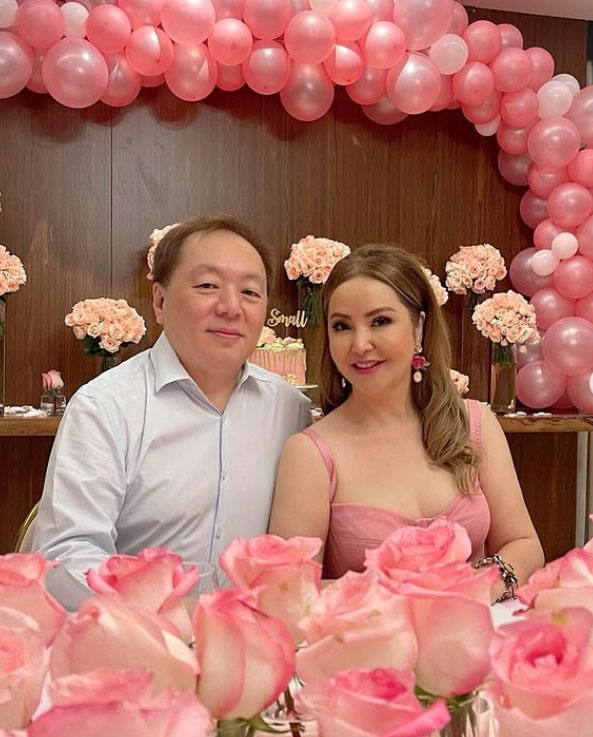 In the business world, Small is known as the wife of Philip Laude (in photo above), the scion of Candyman, the confectionery makers behind Kendi Mint, White Rabbit, Orange Kist, and Viva.

In photo below, Small is with her sister, Alice Eduardo, the founder, president, and chief executive officer of Sta. Elena Construction and Development Corporation.

According to Esquire Philippines, Small and Alice come from a family with several businesses, such as garments export, rice milling, and rice trading. 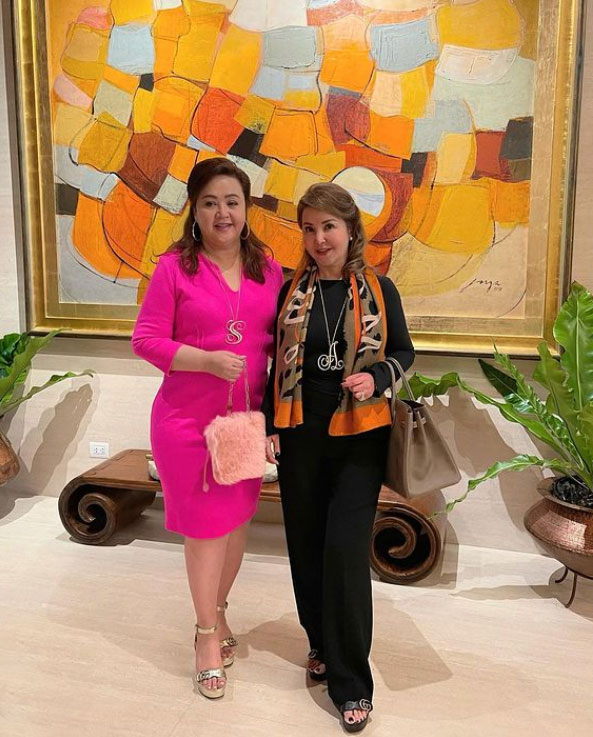 IN HER OWN FASHION

To the fashion-loving netizens, Small's OOTD feeds are eye candy, amusing even.

In the caption, Small wrote, "I was so excited of this dress as I thought I am the only one who has it… then I saw my very own sister wearing the same thing lol! @alicegeduardo" 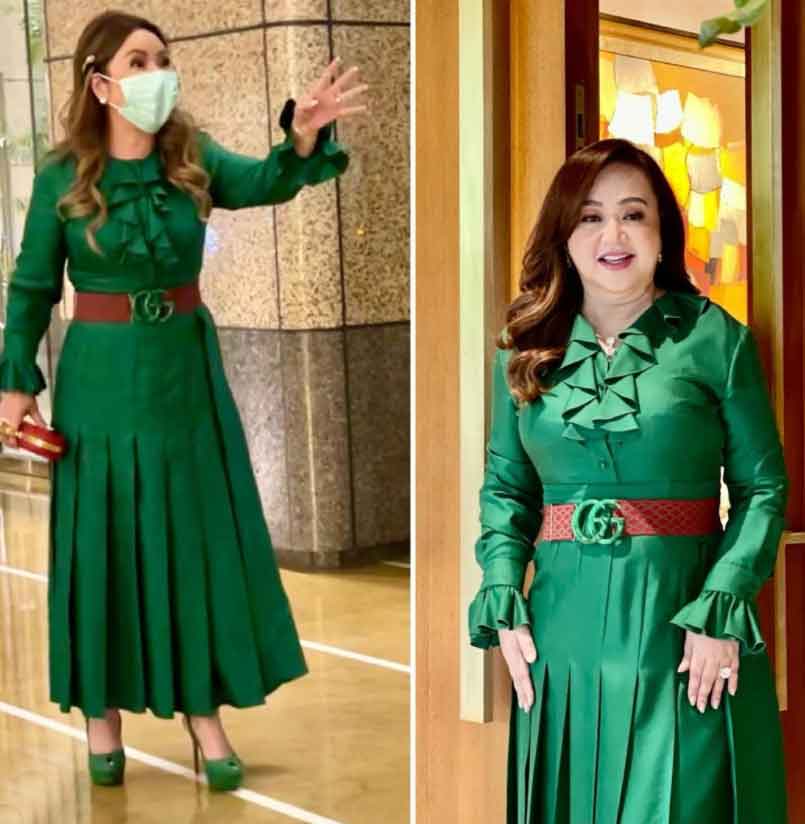 This dress priced at $4,980 was also spotted on Cate Blanchett on September 5, 2018, at the the world premiere of The House With The Clock In Its Walls in London. 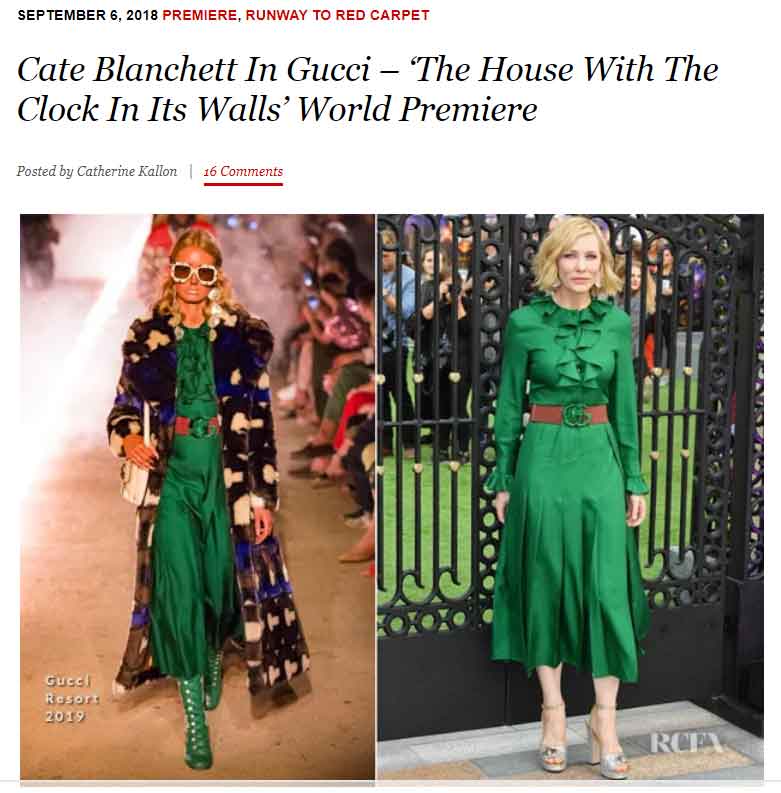 Who would pick oranges in their robe?

Small did at their family mansion in Beverly Hills, California. 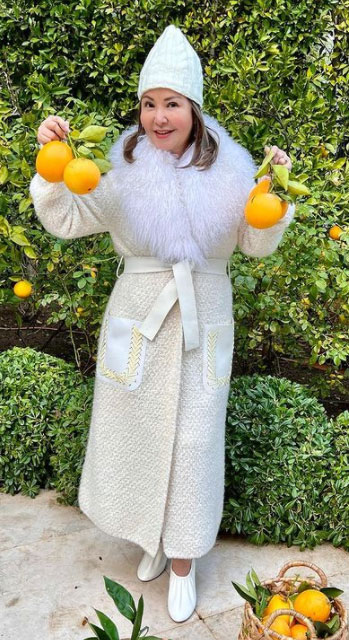 She also dressed up as Kim Kardashian for her Halloween frock in 2021, and called herself Small Laudashian. 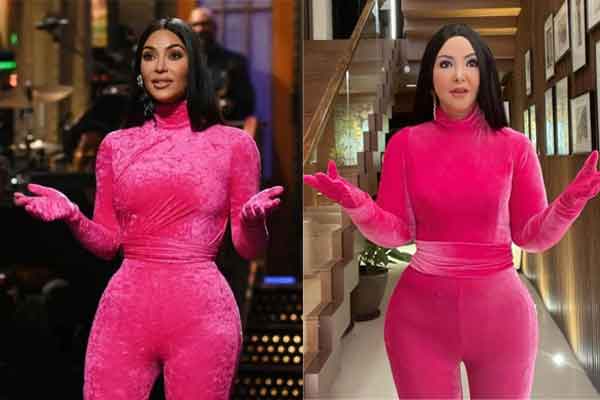 Small copied the style of Blackpink's Lisa Manoban for her vlog about her visit to a South Korean grocery store with Grace Lee (not in photo).

She described in her caption that the woman on the left was "La Lisa Laude or La Lisa Lorena." 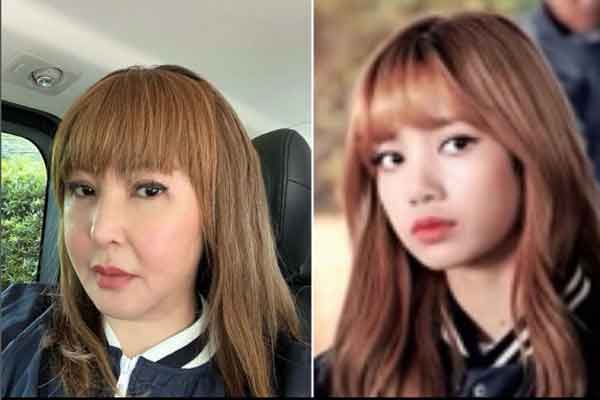 Of course, the fashionistas can't get enough of the designer brands she's been showing on her feeds: Small in (L-R) Christian Dior, Dolce & Gabbana, and Gucci. 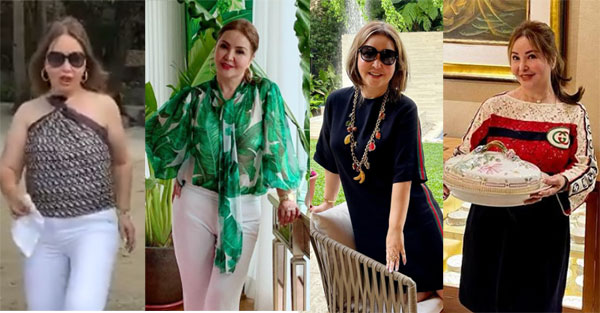 She also has a lot of Chanel tweed jackets, which she wears when she travels to colder countries. 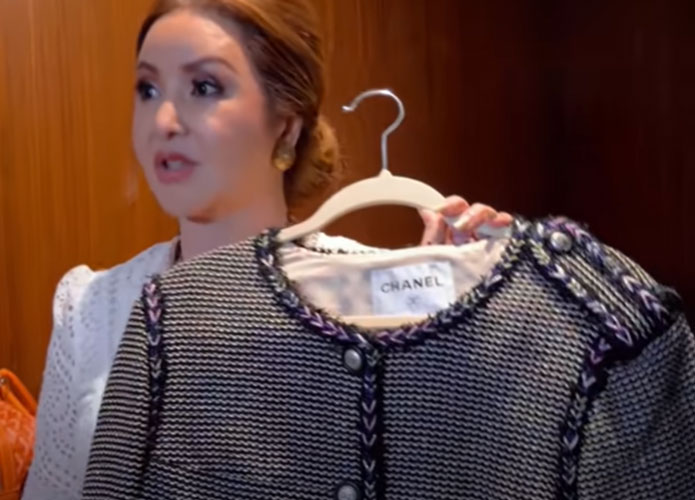 Even her accessories are eye-catching.

A netizen spotted her Richard Mille watch, which seems to be a RM007 model.

In the watch market Chrono24.ph, a piece fetches a price of PHP14 million. 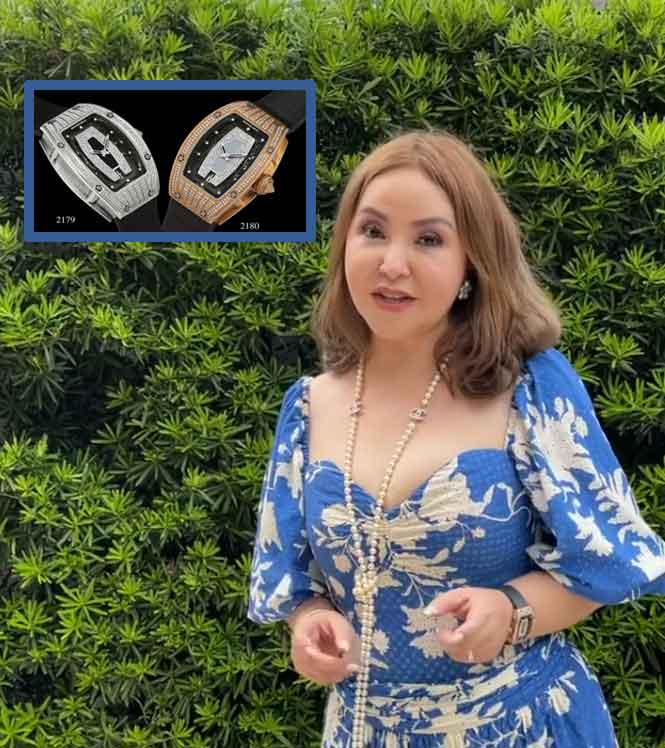 She is fascinated with anything pink or fuschia. 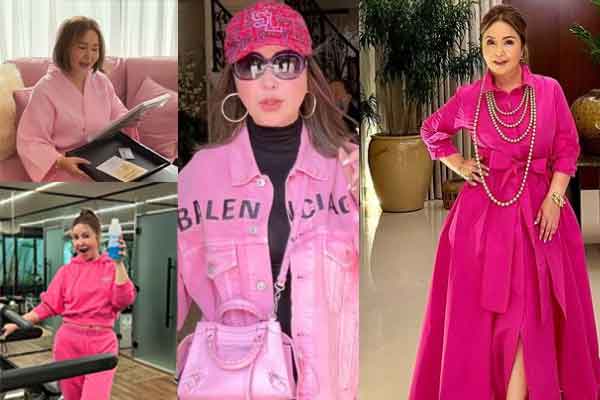 And loves to dress up in clothes with elaborate puff sleves.

She has some style advice, "When in doubt, wear red." 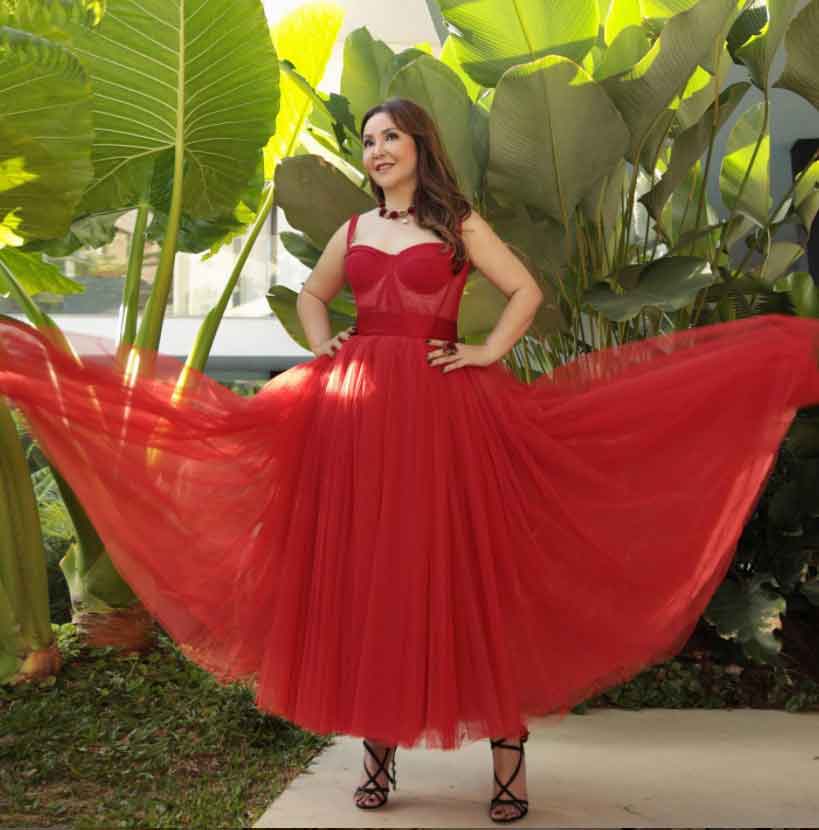 By the way, she has the same gown in pink. 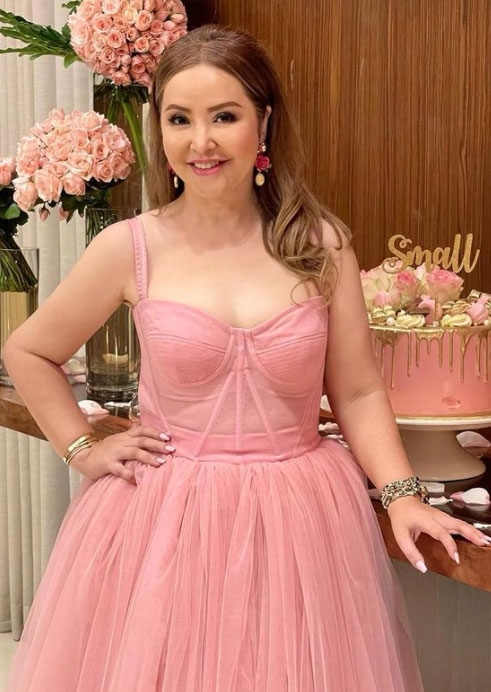 Her fashion philiosophy, according to one of her YouTube vlogs: "Don't dress for others, just do it for yourself and you'll feel comfortable."

And she's not always all glammed up in her videos and photos.

She has a penchant for sweat pants, and does not mind having her picture taken in her pajamas. 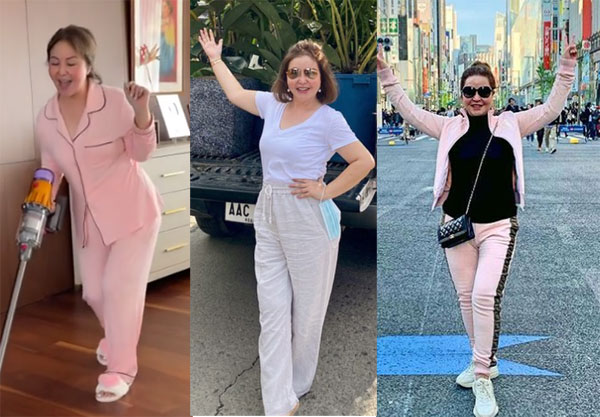 Her bags, shoes, and other collections deserve another feature.

To showbiz fans, Small is known as the close friend of singer Pops Fernandez and actress Marjorie Barretto, whose daughters Julia and Claudia had appeared on Small's YouTube channel.

The actress and former politician Cristina Gonzalez calls her "twinnie" because of their resemblance.

Small's other friends in showbiz Dawn Zulueta and Ruffa Gutierrez as well as broadcast journalists Korina Sanchez and Karen Davila regularly comment on her posts.