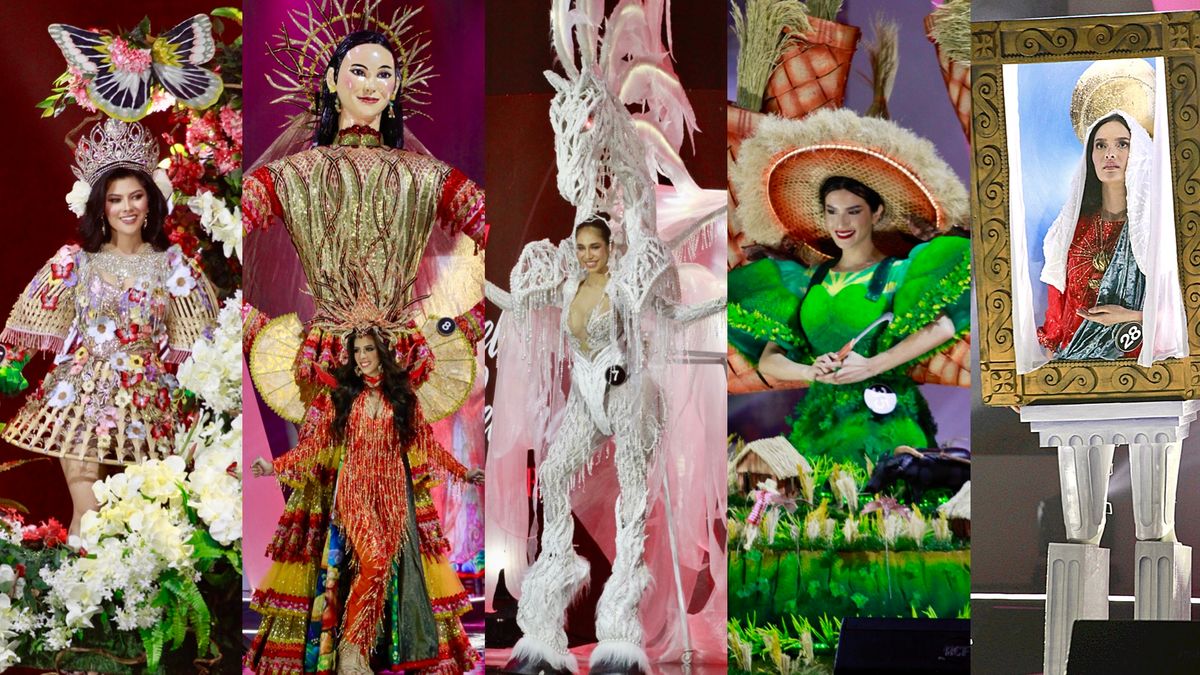 Beyond the glitz and glam, the Bb. Pilipinas 2022 National Costume Fashion Show also turned out to be a fitting toast to the country's rich and colorful heritage, as the brightest local designers literally gave life to some of our legendary mythical creatures and iconic cultural icons.

While most of the candidates stunned the audiences with their breathtaking costumes, 12 of them stood out from the rest.

Let's check out who they are. 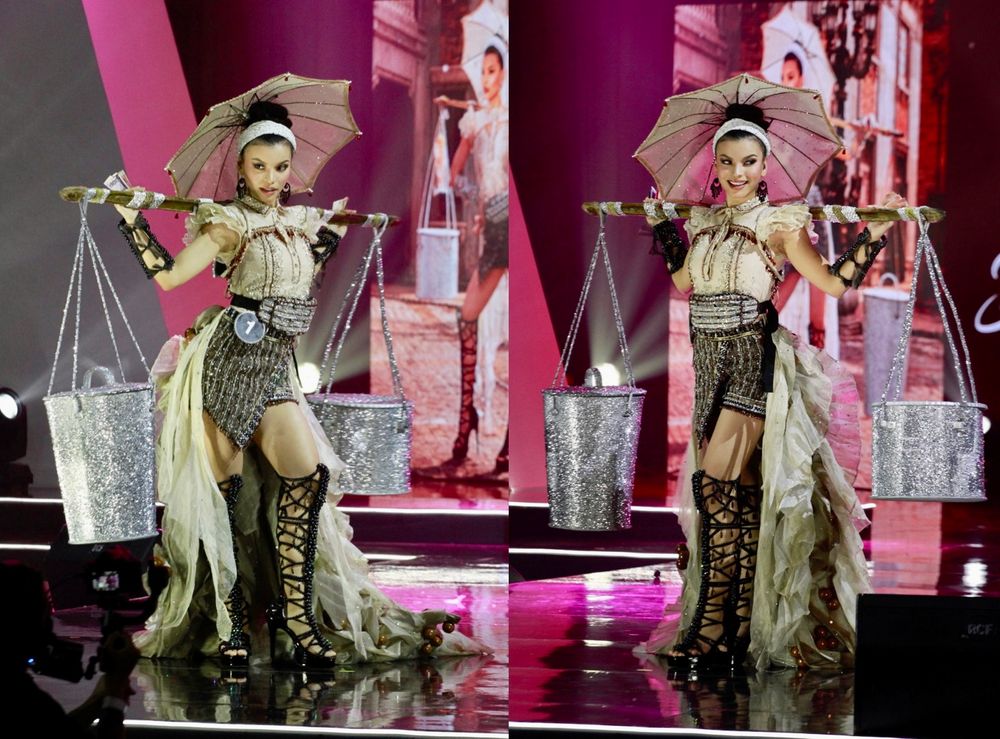 Taho, the classic Pinoy sweet delicacy, is the centerpiece of Stacey Gabriel's national costume designed by Erjohn dela Serna. Other prominent features of the ensemble are the piña silk pechera barong, Ifugao weave skort and belt bag, sago-embellished gladiator heels, "panukli" between her knuckles, and even a peso coin in her ear—reminiscent of street-based taho vendors. 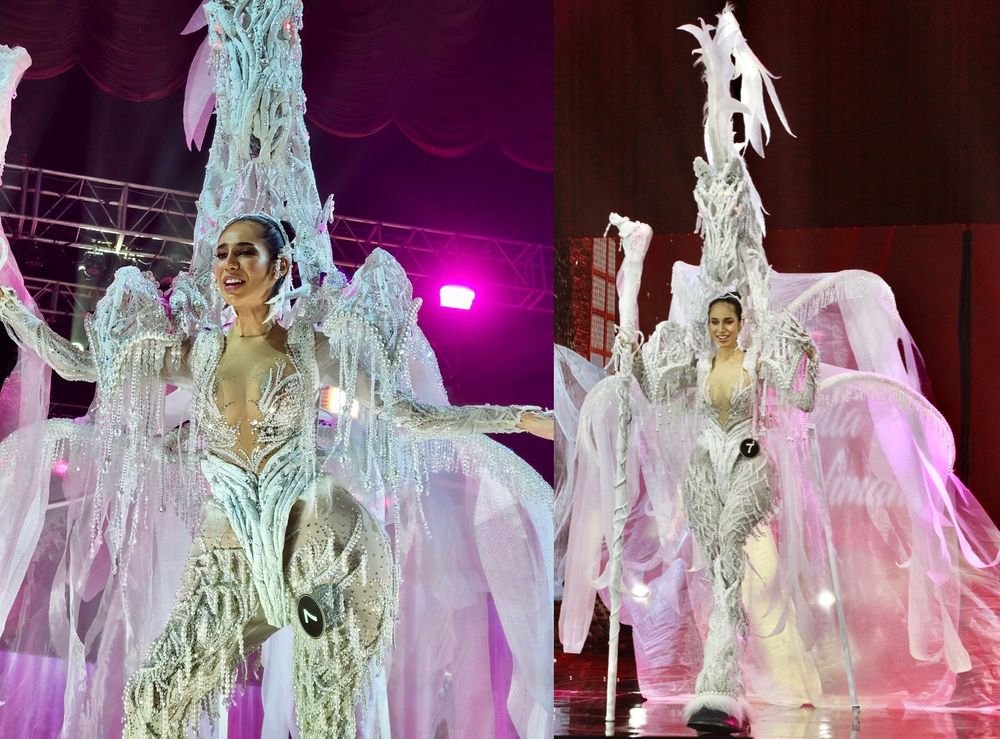 An absolute crowd favorite and the most talked-about costume of the night is none other than Graciella Sheine Lehmann's Tikbalang-inspired costume, the creation of actor/Eat Bulaga mainstay Paolo Ballesteros. The costume is described as an "Ode to breauty that is forgotten through time and misinterpreted by legends." 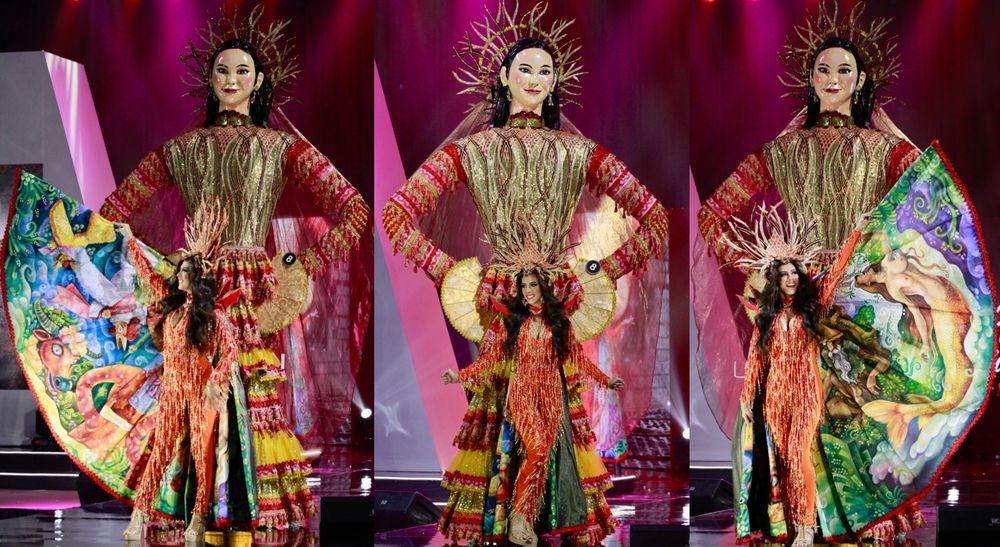 From the brilliant mind of Patrick Isorena with painting design by Angono's own Herbert Ebok Pinpiño, Herlene Budol's costume pays homage to Miss Universe 2018 Catriona Gray while her bodysuit's orange fringes are a reference to her famous moniker "Hipon." 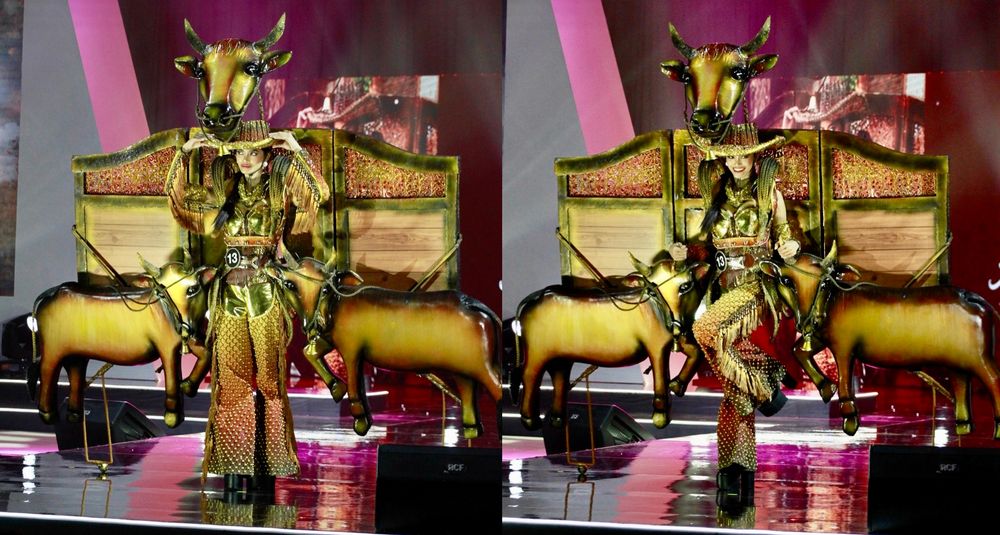 Masbate-based Patricia Navea Tan aptly captures the spirit and ambience of the rodeo capital of the country through this cowgirl-inspired costume with Filipiniana sleeves made of twine and rope. The rustic ensemble is designed by Kennedy Jhon Gasper. 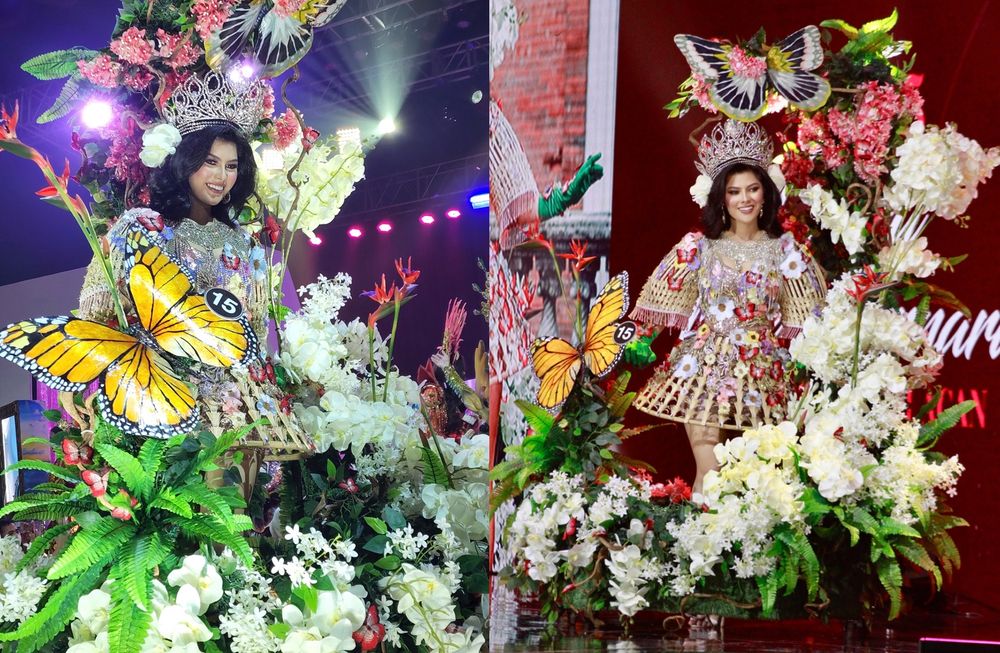 Nyca Mae Bernardo's costume reflects the spirit of the Halamanan Festival celebrated in Guiguinto, Bulacan. The massive regalia designed by Marbin Garcia boasts of an arch-like structure made of various plants and flowers, adorned across the entire arbour with jewels, beads, and butterflies. It is a contemporary piece of Filipiniana created from Singkaban, a Bulacan tradition of shaving bamboo. 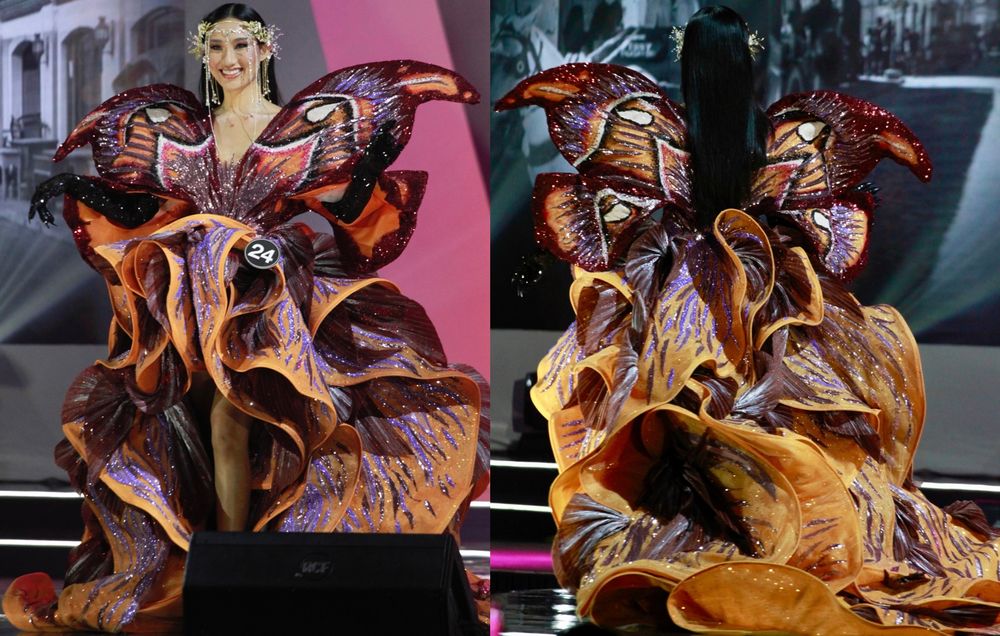 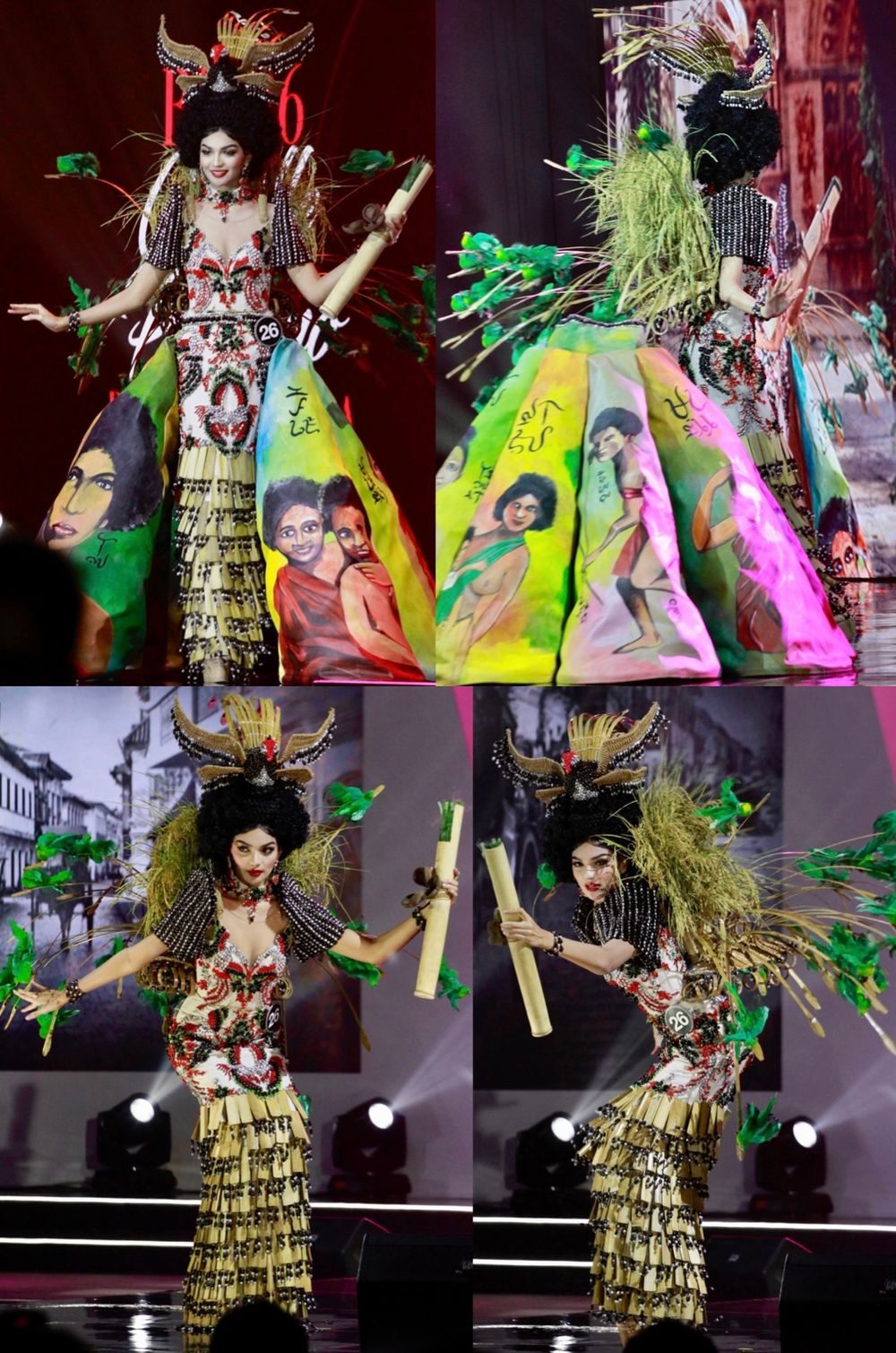 Treating the crowd to indigenous dance steps with her smoke-producing bamboo piece, Cyrille Payumo shocked everyone as she demonstrated her costume's detachable crinoline or hoop skirt. Rich Sabinian's creation attempts to capture the rich heritage of the Aeta Magantsi in Porac, Pampanga. 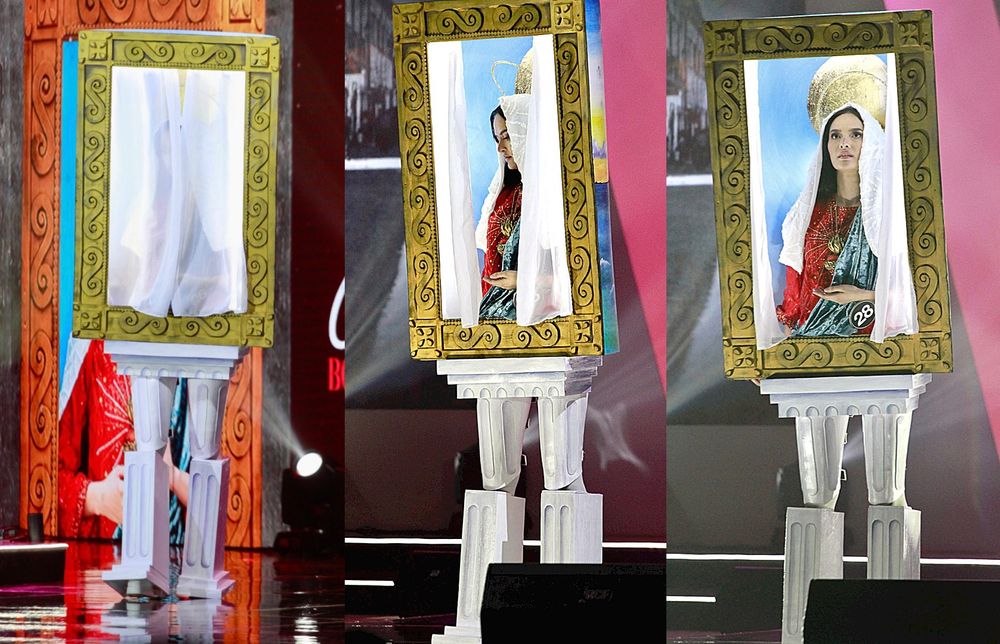 Illustrating the myth of the Lady in White, Gabrielle "Gabby" Basiano's Virgin Mary-inspired costume came from the creative minds of Ken Batino and Jevin Salaysay. It is an ode to the Padul-Ong Festival, a fabled performance that tells the tale of how the Virgin Mary's image was eerily carried from Portugal to Borongan, Eastern Samar. 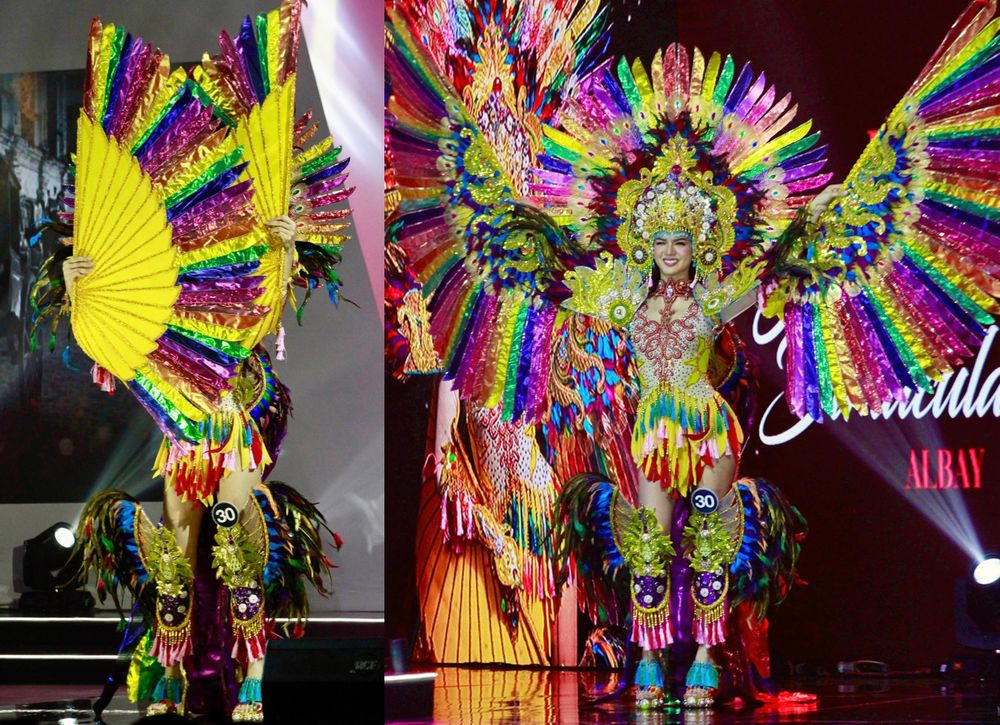 Another mythical creature emerges at the event in the form of the "Ibong Adarna," designed by Er Stephen Alvarado. Aside from featuring the tourism logo of Albay, the costume also exhibits majestic rainbow wings that represent the LGBTQ+ community. 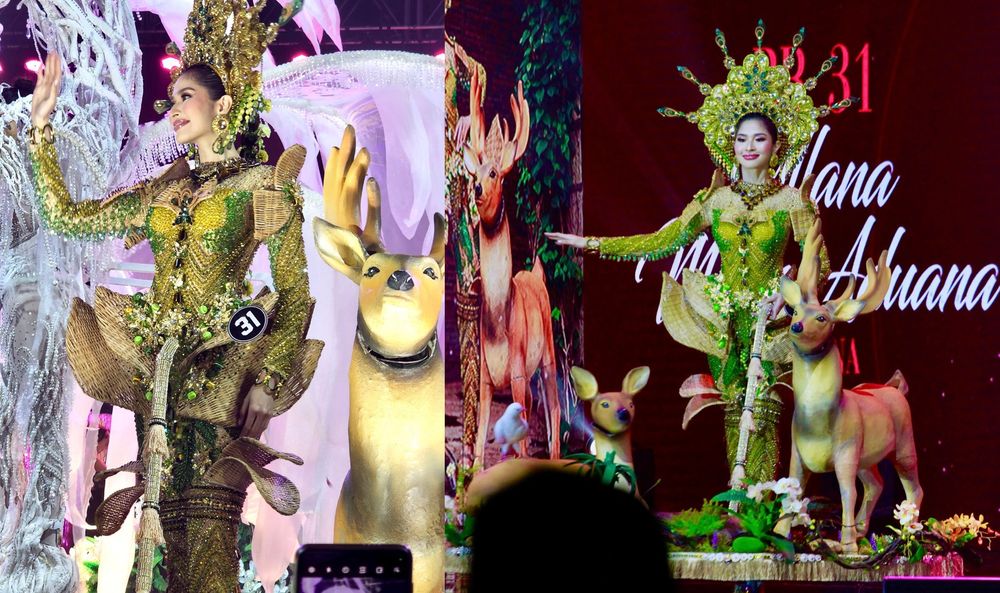 Yllana Aduana unleashed her inner Maria Makiling, deity and protector of forests, animals, crops, and wildlife, in her national costume designed by Jomar Peralta. The components of this outfit were created with the aid of the local youth of Laguna. 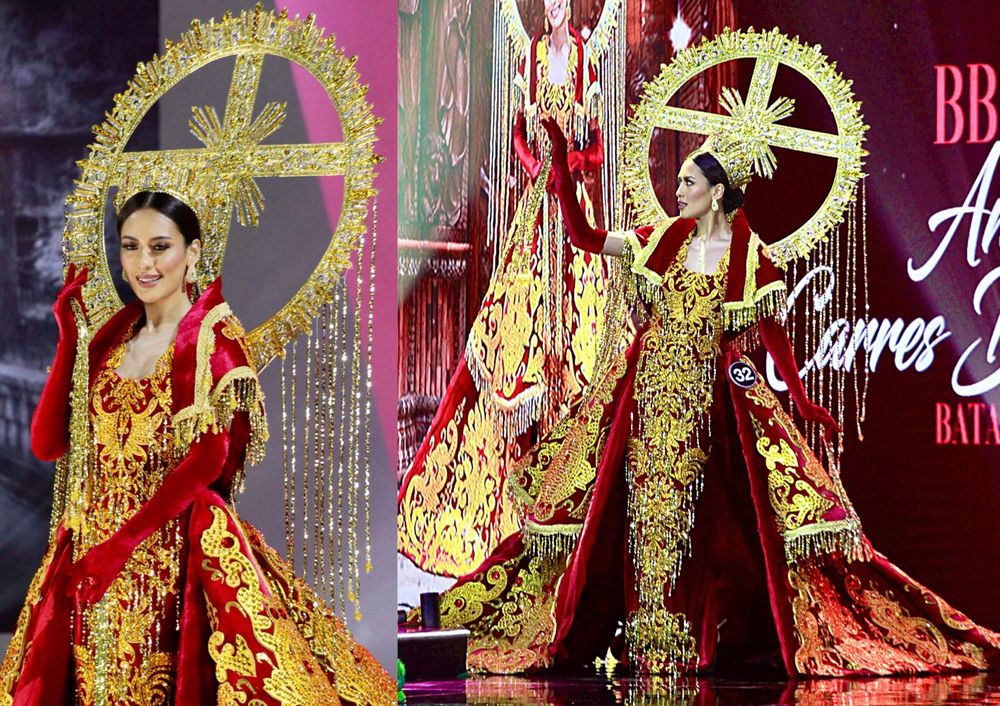 The crystalized, embroidered, red velvet gown worn by Anne Carres De Mesa draws inspiration from the marginal towns of Batangas. The costume created by Odelon Simpao is accentuated by a gold cross that depicts the heavenly image of the Holy Cross of Alitagtag and Bauan. 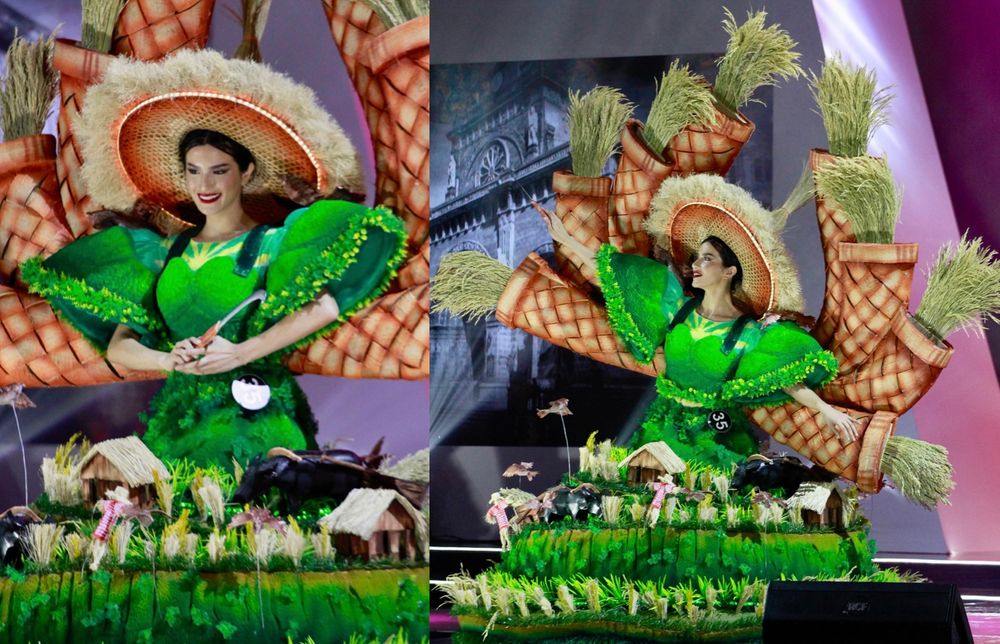 Last but definitely not the least, Diana Mackey captivates in her Malayka Yamas-designed costume. Her attire showcases Central Luzon's thriving agricultural and cultural history. It stands for the rich and distinctive culture of the Filipino people, which withstood the ravages of modernization.