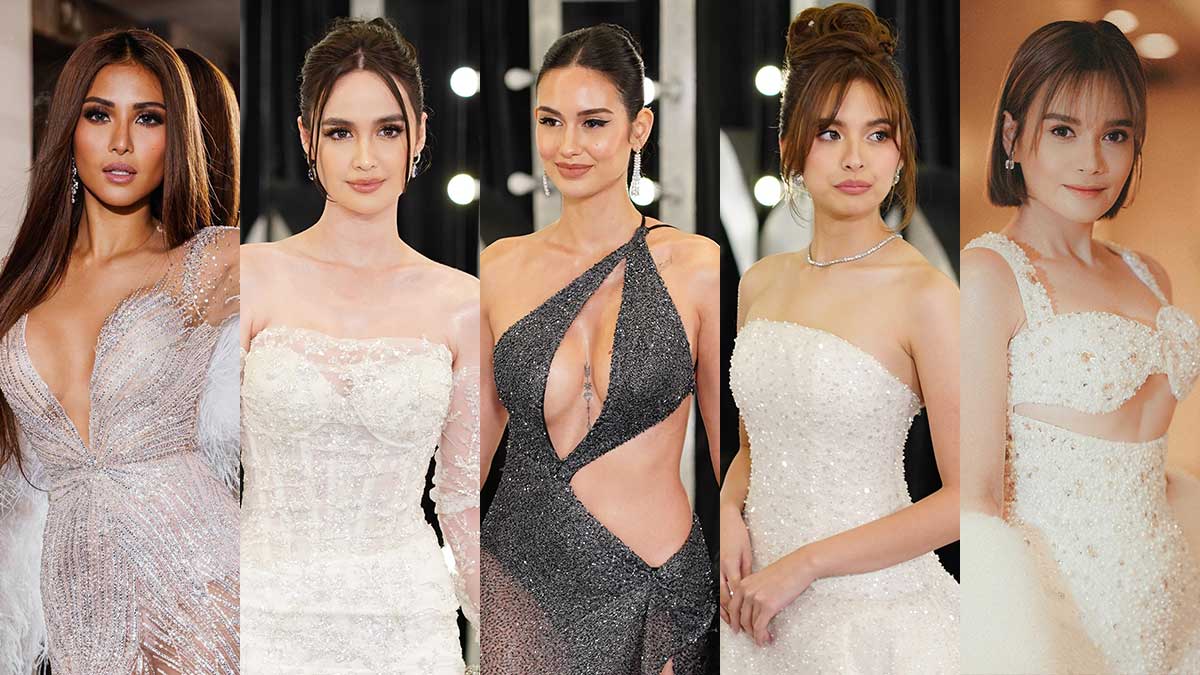 The pioneer edition of GMA-7's fundraising event was held at the grand ballroom of Shangri-La at the Fort in Bonifacio Global City.

They did not just make heads turn; their looks also made us look back to the time when all the rage were elaborate necklines and sleeves, very tight and volumious skirts, and anything glittery and frisky.

Here they are in no particular order:

Sanya was styled from head to toe by Eldzs Mejia, Gery Penaso, and Dale Mallari.

Trivia: The ostrich feather stole became a fashion staple in 1930s, and was spotted on Hollywood actress Jean Harlow many times.

She wore one to the premiere of her movie Hell's Angels, which was directed by Howard Hughes, whose biopic The Aviator (2004) reenacted the premiere with Leo di Caprio playing Howard and Gwen Stefani playing Jean. 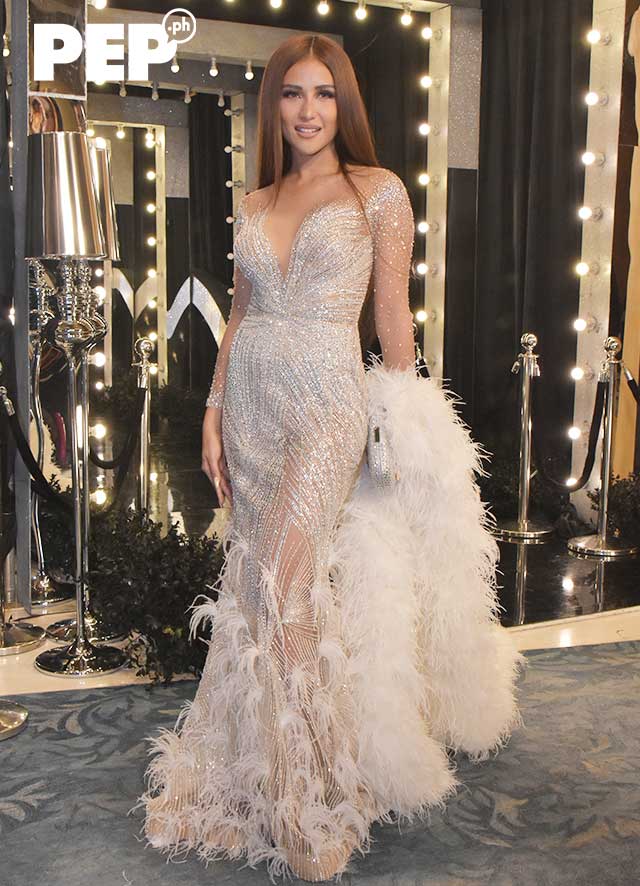 The winged eye liner courtesy of Roge Bernaldez was the highlight of her beauty look.

Her perfect bun was done by Arvee Yadao. 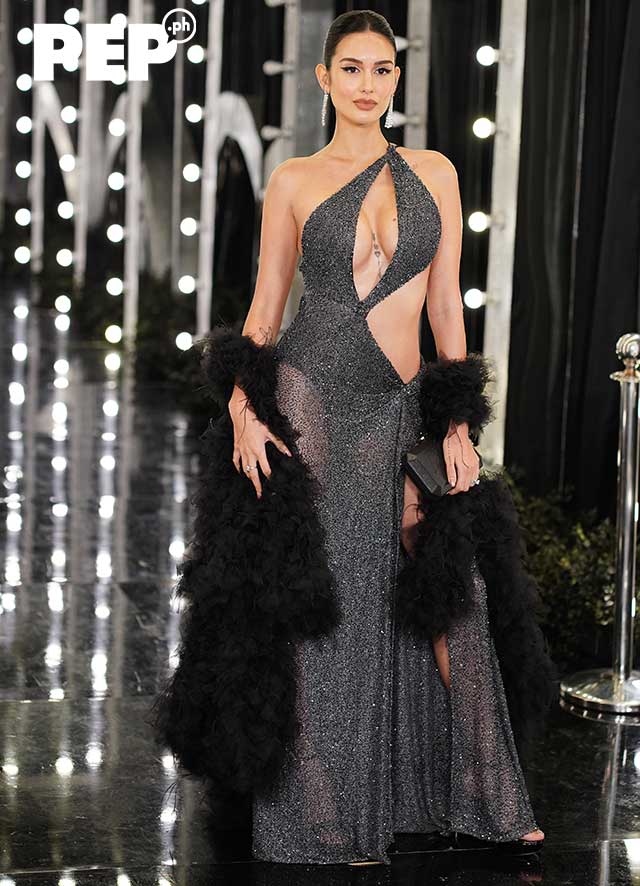 Heart Evangelista, an easy shoo-in on any best-dressed list, did not surprise when she won the Glamorous Star of the Night award at the event.

Her custom Ashi Studio fringed gown with structured sleeves would have been a standout during the Roaring Twenties or the era of flapper dresses.

Heart was styled by Kat Cruz and John Karunungan of STYLEdiT Group. Her glam team included Jeck Aguilar for hair and Justin Louise Soriano for make-up.

Kate Valdez ditched the gowns and opted to emulate Katherine Hepburn, the iconic star of the '50s, in a pinstriped suit designed by Rau Uson Ablaza.

She was styled by Drew Lacia. Her red carpet beauty look was courtesy of make-up artist Japeth Mike Purog and hairstylist Albert Muyo. 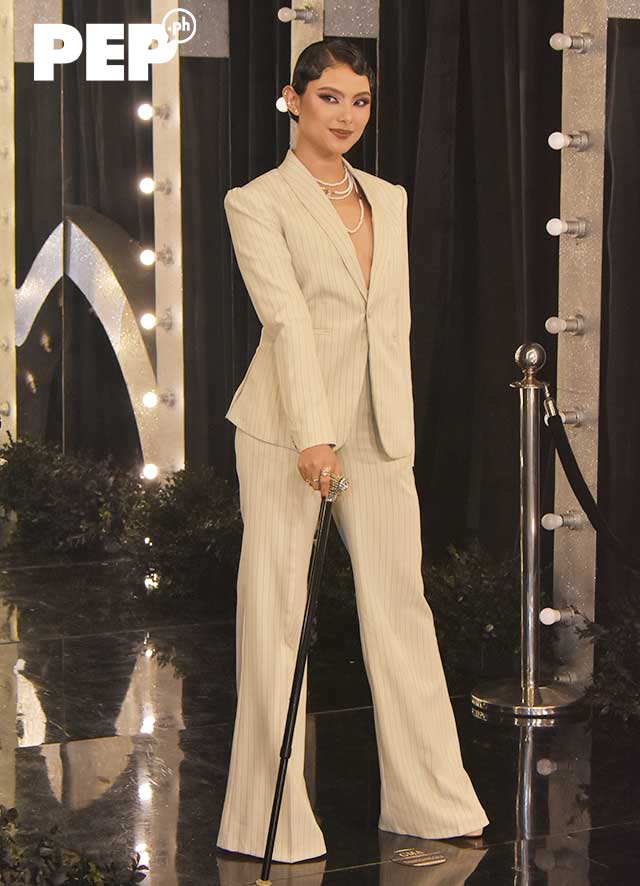 Julie Anne San Jose stepped into the ball in royal fashion in a Mark Bumgarner gown with feather accents. Her stylists were Rain Dagala and Em Millan; her make-up artist was Bambbi Fuentes.

It was refreshing to see Yasmien Kurdi pulling off this crystal-embellished white cut-out gown designed by Chynna Mamawal.

Rhian Ramos paid tribute to the golden girls of the 1920s in this Jerome Lorico creation.

The white cape added drama to her glittering red-carpet outfit. 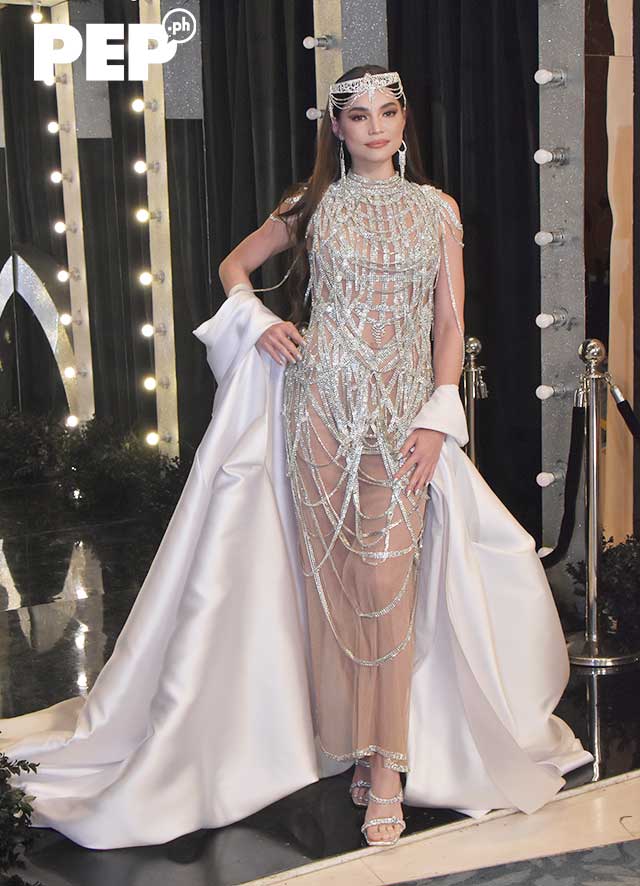 Start Up: PH actress Kim Domingo looked divine in this Anthony Ramirez corseted gown, which reminded us of Rita Hayworth's dress sheer dresses in the 1942 movie You Were Never Lovelier.

She was styled by AJ Alberto and Christopher Ian Vinarao, with Carell Garcia and Cristine Benoman. 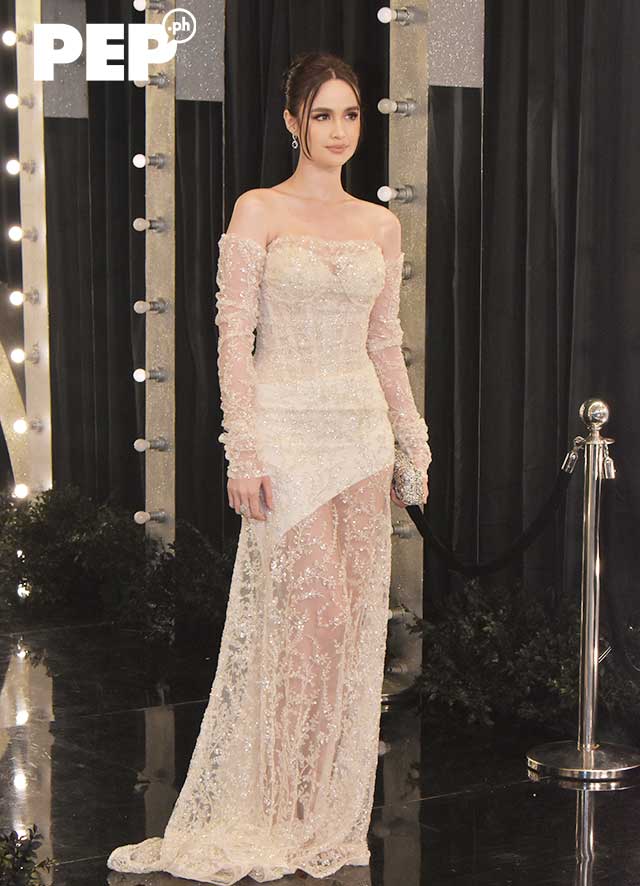 Megan Young was every inch a queen in this fully-beaded and crystal-embellished gown by Boom Sason.

Her red-carpet look was reminiscent of the blush-colored gown she wore when she was crowned Miss World 2013. It was the cape which evoked memories of Old Hollywood. 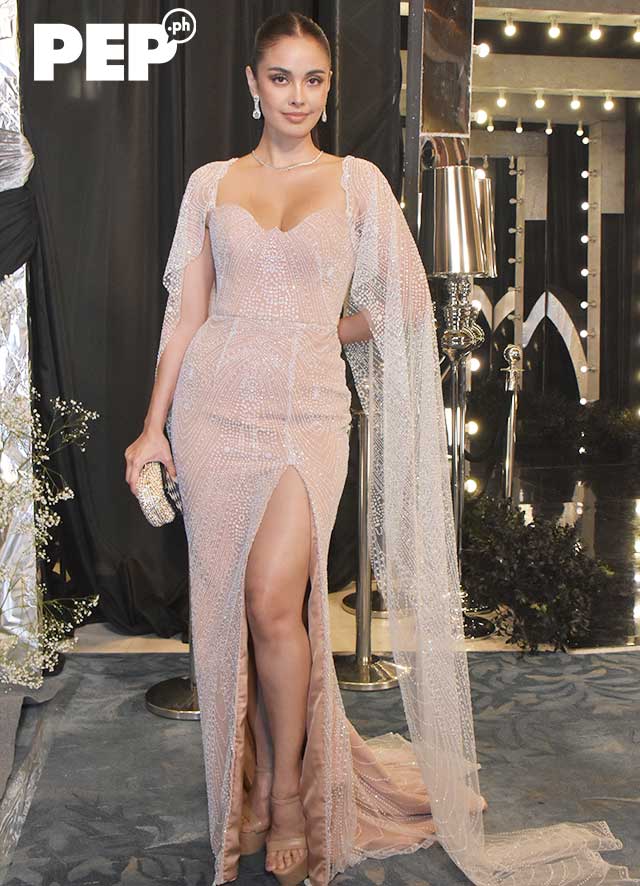 She was styled by Cath Sobrevega, with Aries Manal for her hair and Justine Navato for her make-up. 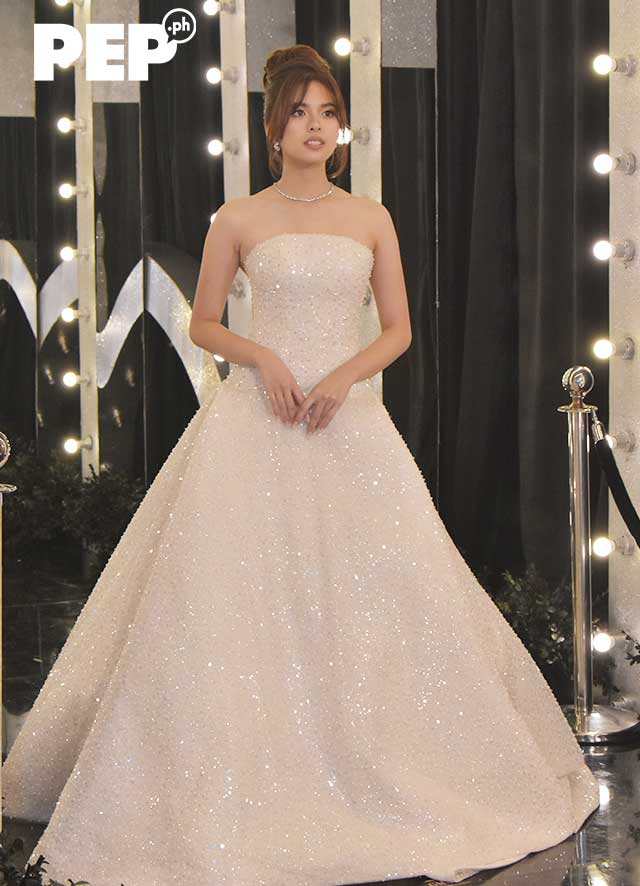 Sofia Pablo's gown was inspired by Audrey Hepburn's Givenchy dress in the 1961 film Breakfast at Tiffany's.

Designer AJ Javier turned the bottom part into a ball skirt "bedazzled with 33,000+ crystals; each of them hand-placed with care."

Sofia's updo hair was done by Justine Ocampo, and her make-up by Kaye Misajon.

In any Great Gatsby-inspired party, she would be a showstopper.

Her stylist was Regi Cruz, with Dave Quiambao for her make-up and Alexander Rol for her hair. 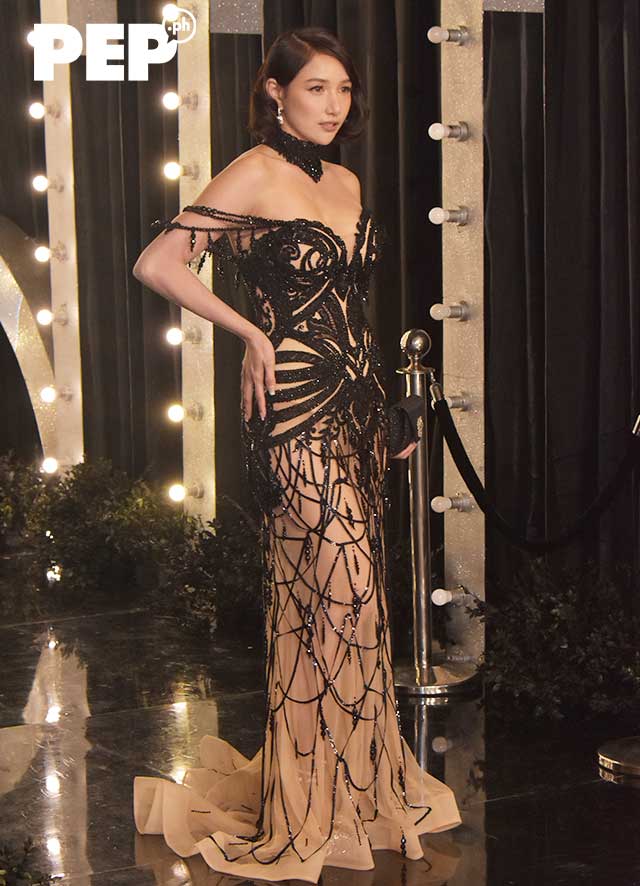 She completed her old Hollywood glam look with a custom cape by Steph Tan and a pair of black latex gloves by Atsuko Kudo.

Kyline was styled by Melville Sy, Maita Baello, and Shark Tanael of Studio24C. Her Cher-inspired look for the charity event was courtesy of Robbie Pinera and Brent Sales.

Kyline and her date Mavy Legaspi were named Sparkle Love Team of the Night.

One of the project's beneficiaries is the Magallanes Elementary School in Limasawa Island, which was struck by Typhoon Odette.