Experience sakura season all year round in this milk-tea shop 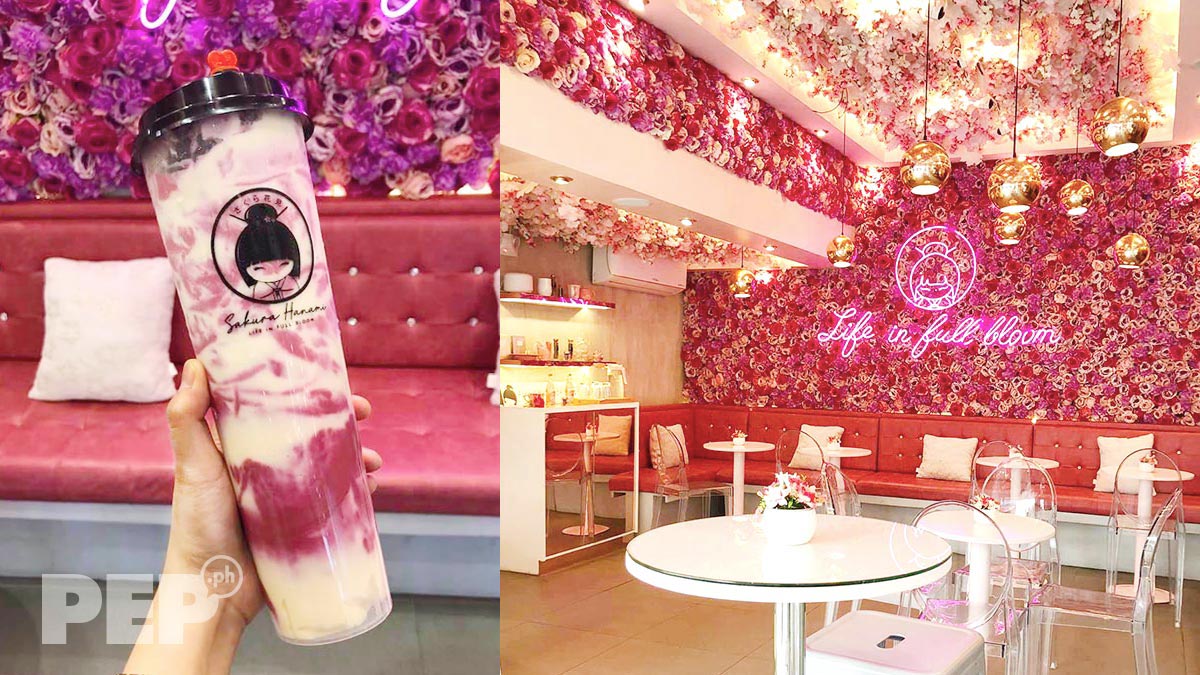 Cherry blossoms or "sakura" flowers bloom every springtime in Japan.

Although "sakura season" lasts only three months every year, these pretty flowers are actually in full bloom only for about a week.

Luckily, there's a milk-tea shop in Manila that lets you experience sakura season all year round, and will also give you a taste of the lovely white and pink flowers—for real!

This charming and cozy spot is called Sakura Hanami, which translates to "cherry blossom viewing" in Japanese.

One little peek at their perky, predominantly pink and flower-filled interiors is all it will take to entice you to go on a selfie frenzy. 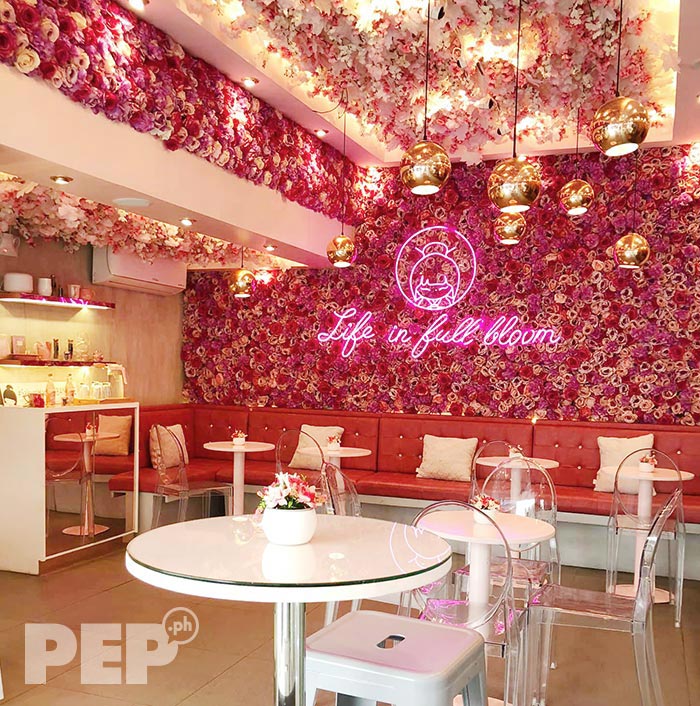 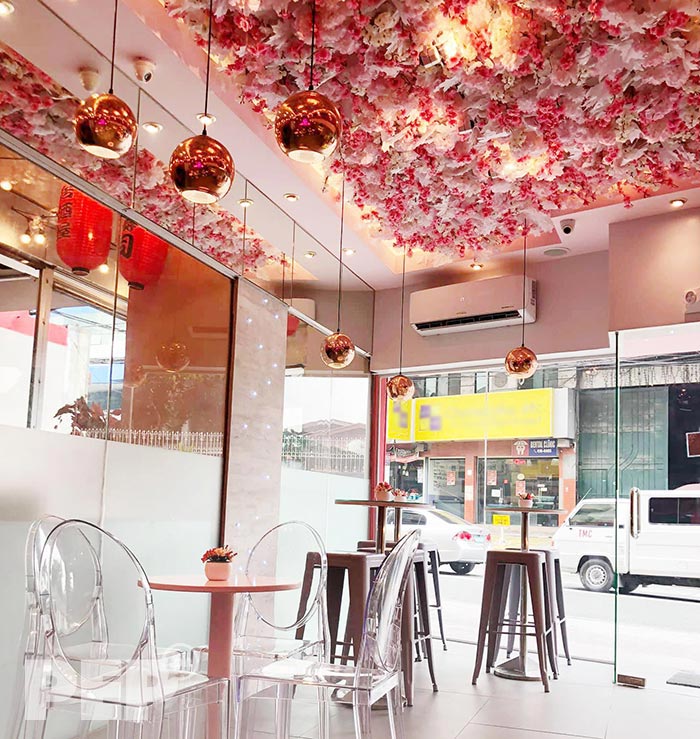 According to Joyce, she and her business partners Ella Choi and Sharmay Cu initially planned to make their interiors look as simple as possible.

But with the continuous upsurge of new milk tea shops in the country, they knew they needed to do something different. 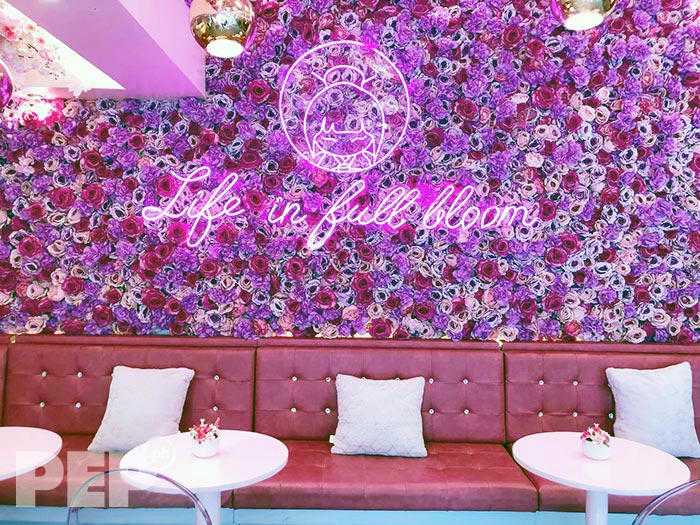 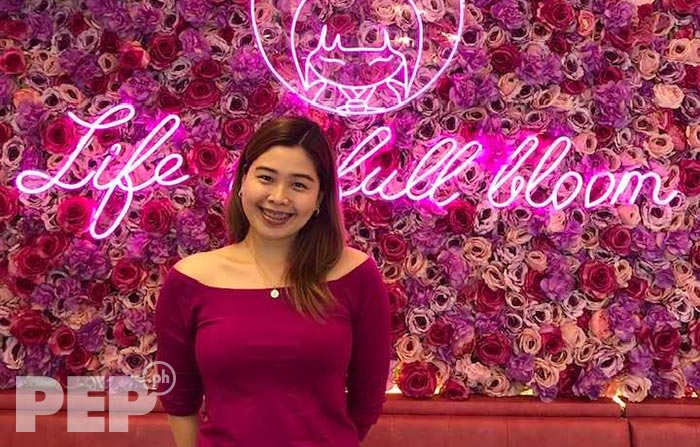 After agreeing on the concept of sakura-inspired "wedding" for their store's vibe, Joyce and her partners proceeded to bring it to life with the help of an artist.

They decided not to get an interior designer "para makatipid."

With the help of their artist and suppliers, the owners of Sakura Hanami made sure that everything in their store is aligned with their theme and color scheme. 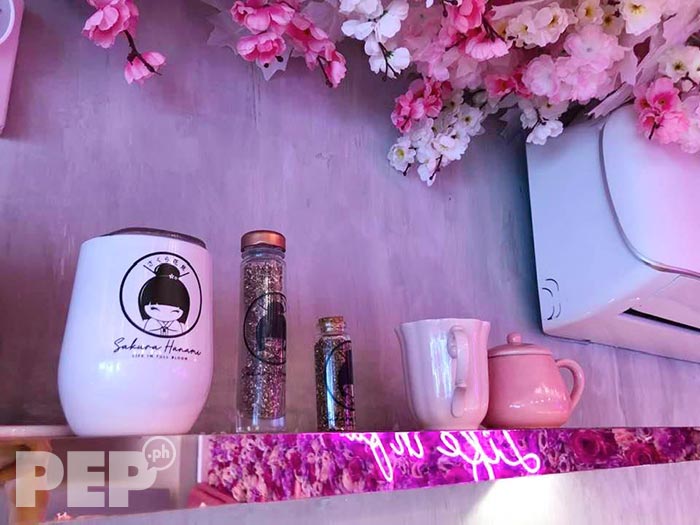 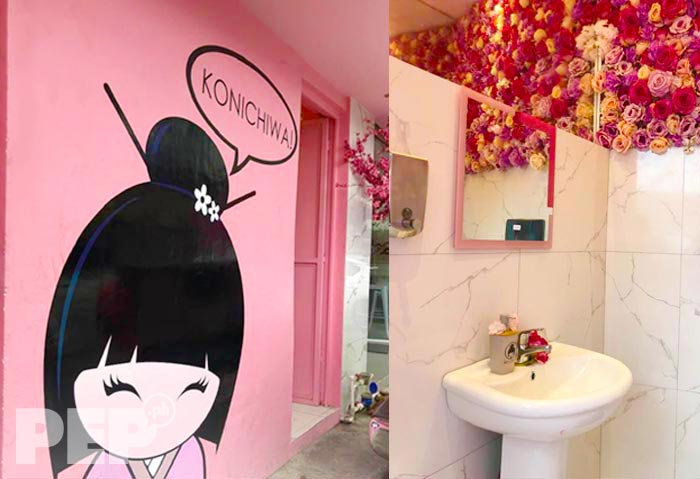 While they were busy glamming up their first branch in Maginahawa Street, Diliman, Quezon City, Joyce and her partners also thought of creating an equally unique concept for their drinks. 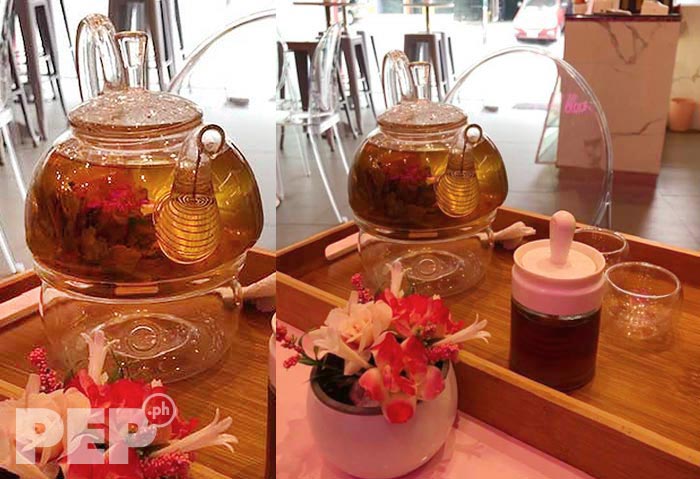 To make their customers' experience of sakura season more legit, most of Sakura Hanami's ingredients are imported directly from Japan.

PEP.ph got to try the Blue Pea Fruit Tea and Blooming Paradise Flower Tea (PHP195), and was refreshed by their mild floral scent and sweet-but-a-bit-tart flavor. 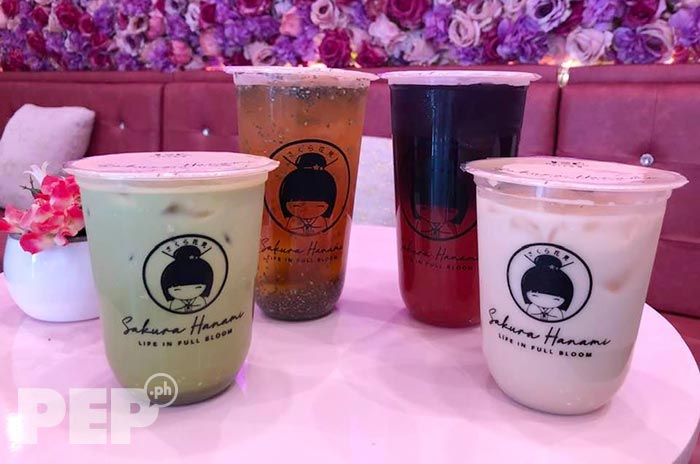 Sakura Hanami's unique, luscious milk-tea selection includes the best-selling White Sakura Milk Tea, which has a balanced blend of milk and citrus; the Matcha Creme Milk Tea, which comes with a strong vegetal flavor without the lingering aftertaste. 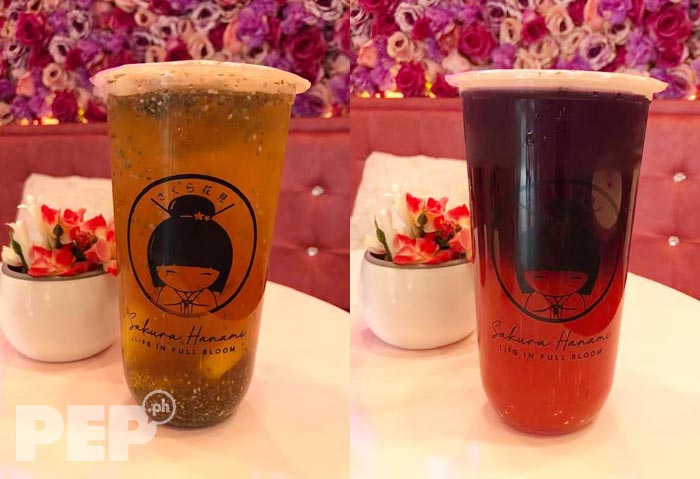 Sakura Hanami's peach-flavored milk tea is not only "Instagrammable," but sweet and zesty, too. 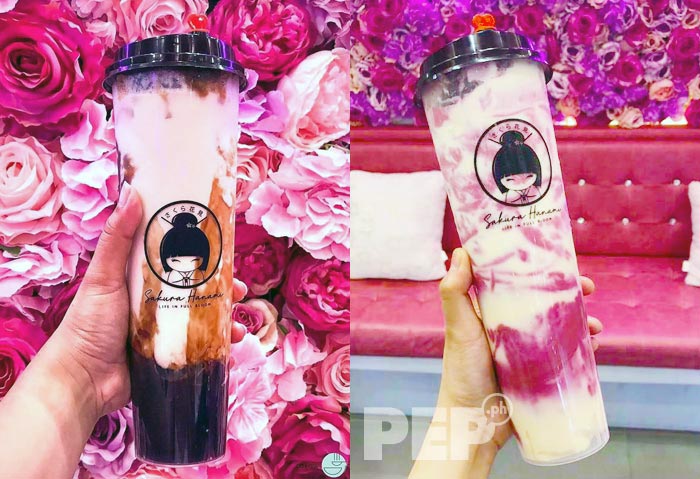 Completing the list of bestsellers are the Lava Pearl Latte and Red Velvet Cheesecake Milk Tea.

The Lava Pearl Latte is Sakura Hanami's flagship drink, according to Joyce.

Although it looks similar to many brown sugar milk teas, what makes this one different is that Sakura Hanami mixes its rich, smooth-tasting coffee with its signature Lava syrup infused with black sugar.

The Red Velvet Milk Tea, meanwhile, is a crowd favorite for its balanced blend of sweet cream and fresh organic tea.

Sakura Hanami milk teas are sold in medium to extra-large (one liter) cups starting at PHP95 to PHP195.

The latest addition to Sakura Hanami's menu is their appetizing snacks.

The shop offers Sakura bites or sweet donuts for as low as PHP40.

They come in special flavors such as avocado, green melon, ube, chocolate banana, and raspberry. 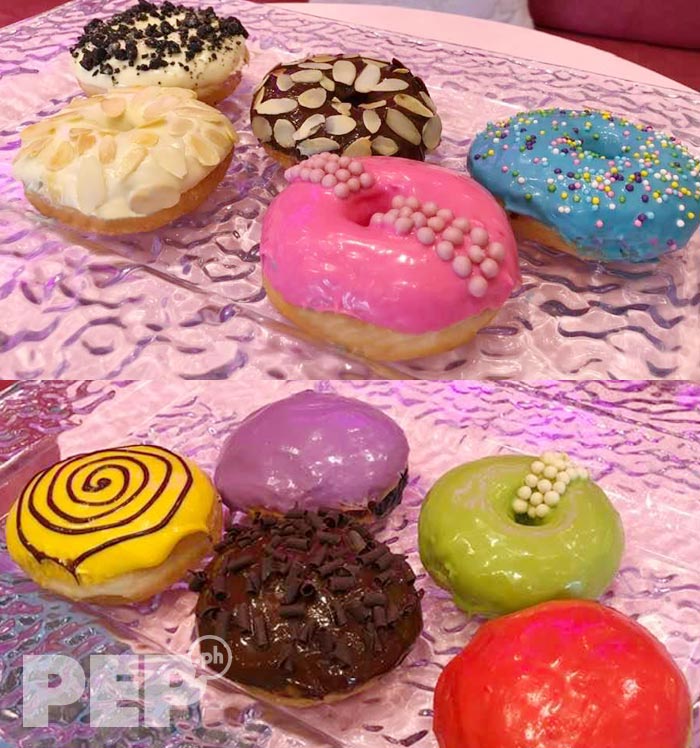 Sakura's Savory Donuts are also a must-try for their soft baked dough and scrumptious filling. 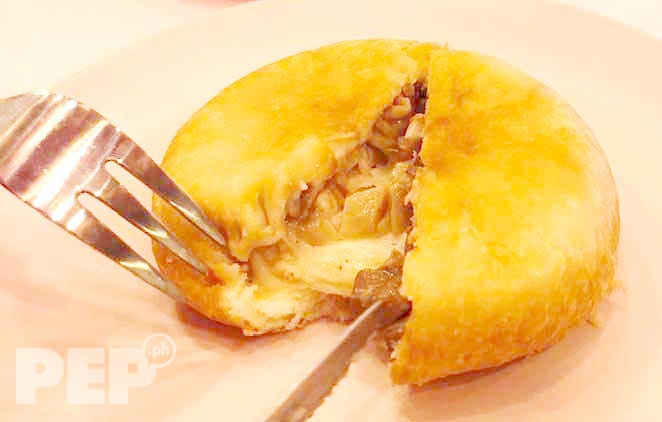 Aside from these, they also sell moist caramel cake and nachos in their stores.

Sakura Hanami has branches in Maginhawa and Banawe in Quezon City; Taft and UST in Manila; and Bocaue, Bulacan.