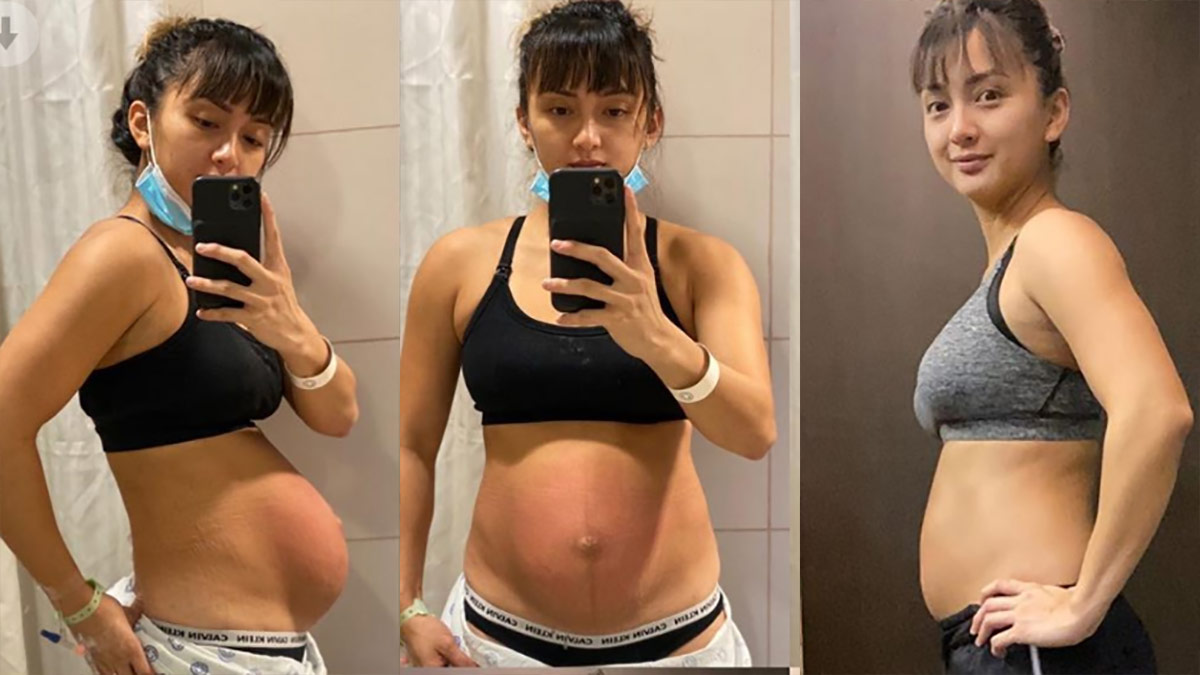 Iya Villania posts photos of her tummy a week after giving birth. It is almost flat, but not yet "where I want it to be," she says.
PHOTO/S: @iyavillania on Instagram

Iya Villania is gradually getting back in shape after giving birth to her third child recently.

On Monday morning, July 27, Iya uploaded a collage of her post-pregnancy photos.

The top photo was taken right after she delivered at The Medical City in Ortigas Avenue, Pasig City. She said the redness of her skin around the belly was due to scratching.

The bottom photos were taken a week after her delivery "with the daily use of a binder."

Iya and hubby Drew Arellano welcomed Baby Alana Lauren on July 18—their youngest and unica hija after their two sons: Primo, 4, and Leon, 2.

HOW IYA DOES IT

According to some health websites, it takes "at least six weeks" after delivery before the tummy goes back to its normal size.

It's the period of time needed "for the stretched tissue to start to regain its elasticity" and for the "uterus to shrink back down," an article on HuffPost Australia stated.

Iya, however, dumbfounded her followers when she posted on Instagram about her flattening tummy barely a week after delivering her third baby.

What did she do?

For her diet, Iya said she prefers "a good mix of nutritious and food that makes me happy [smile emoji]"

She added, "Thanks to those sending over all sorts of things from baked goods to ulam [smile emoji]"

Her workout, on the other hand, is "round the clock breastfeeding [smile emoji]"

Since giving birth to her eldest son Primo in 2016, Iya has been posting about her fitness journey—not to flaunt, but to tell fellow mommies that it's possible to lose the pregnancy weight.

The Kapuso host wrote, "Crazy what a mother’s body goes thru! Being so much kinder and patient with my body this time [smile emoji]

"My body isn’t where I want it to be but I’m okay with that. It will take time and I’m in no rush [smile emoji].

"reminding myself that recovery is just as important and enjoying every minute of it [smile emoji] but I can’t wait to sweat again! [smile emoji]

Iya, however, reminded that none of that has been easy. As the mother of three said in her recent interview with 24 Oras, "Hindi siya madali."

Iya and Drew got married in January 2014.