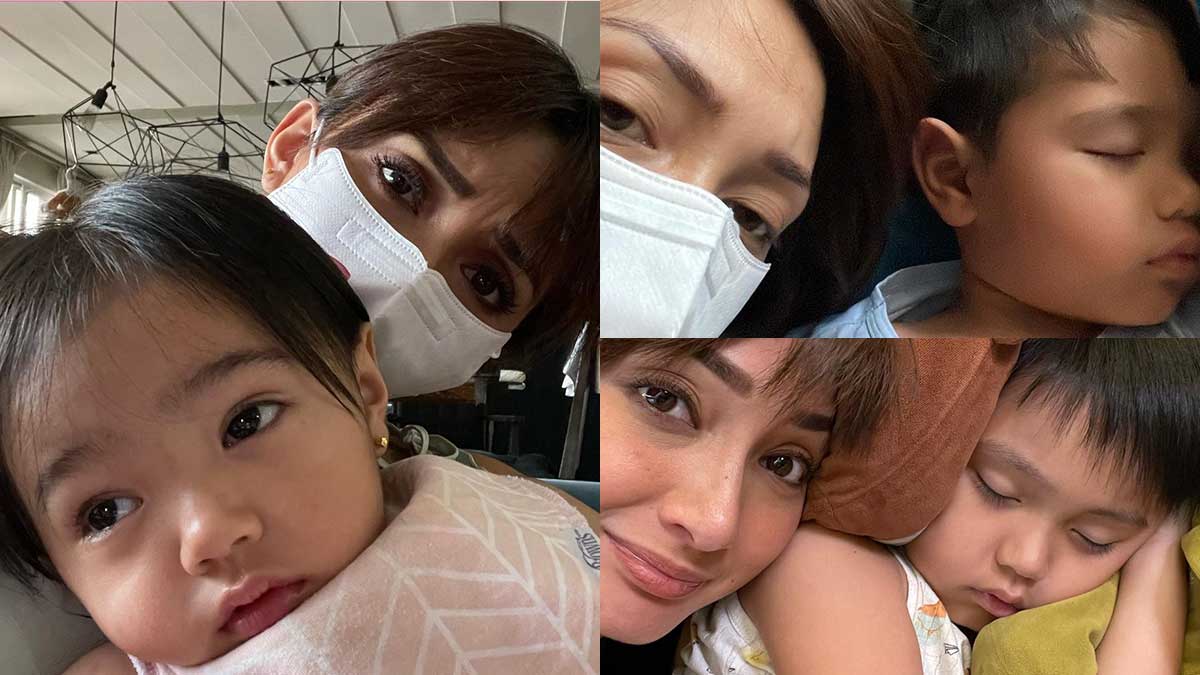 All three kids of Iya Villania and Drew Arellano—Alana Lauren, 1; Alonzo Leon, 3; and Antonio Primo, 5—have unfortunately tested positive for COVID-19 but are now recovering from the disease.

On Friday, January 14, 2022, Iya revealed in an Instagram post that her youngest child Alana have also joined them in their quarantine area at home after she showed symptoms of COVID-19.

"Leon on the other hand, by night, he was fine! [emoji] like nothing happened [emoji] Not sure if that’s really it for him but so far since last night, he hasn’t had a fever and his demeanor is back to what it was before he got sick! [emoji]"

Iya is hoping that all of her kids will recover from the symptoms in just three days, just like she and Drew did.

The Kapuso host continued, "Had to give both Primo and Alana Calpol last night. Primo slept fine and woke up nalang to take another dose when he started to get warm again.

"So far his symptoms have been sneezing (which was only yesterday morning) and fever. Alana, on the other hand, has been warm and uneasy since last night and wants nothing but cuddles.

"Symptoms the kids have been experiencing so far: sneezing (Primo), vomiting (Leon and Primo - I found this happened during intake of meds), and fever (all 3 kids).

"Hoping Leon is done with it for good (it’s day 3 for him today). I think Primo will be too soon because aside from his fever his demeanor is good, and hopefully so will Alana (Both day 2) [emojis]

"Hoping tmrw will be better for these monkeys [emojis] Prayers and love to everyone else going thru this! [emojis]"

Iya remains to have a positive outlook even with all the challenges their family is currently facing because of COVID-19.

"Ps: On the upside, borders have now opened and everyone’s reunited [emojis] so now we can all help each other as the kids heal and recover.

And before she gets bashed for wearing makeup in the photo, Iya already clarified that she had work today.

"Pps: Yes, naka makeup ako. Coz thats how I take care of my patients here at home [emoji] NOT! Had work and had to tape a segment [emoji]"

Iya ended her post saying, "Ppps. Bring on the antibodies! [emoji] Just trying to stay positive as we try to find our way out of the woods [emoji]"

On January 10, 2022, Iya revealed in an Instagram post that she and her husband Drew had to isolate themselves from their children after testing positive for COVID-19.

On Wednesday, January 12, 2022, Iya revealed on Instagram that Leon woke up with a fever and joined them in their quarantine area. A day later, it was Primo who started experiencing the symptoms of COVID-19.

These happened just days after Iya revealed in an episode of Mars that she is pregnant with her fourth child.