History of worst earthquakes in the Philippines 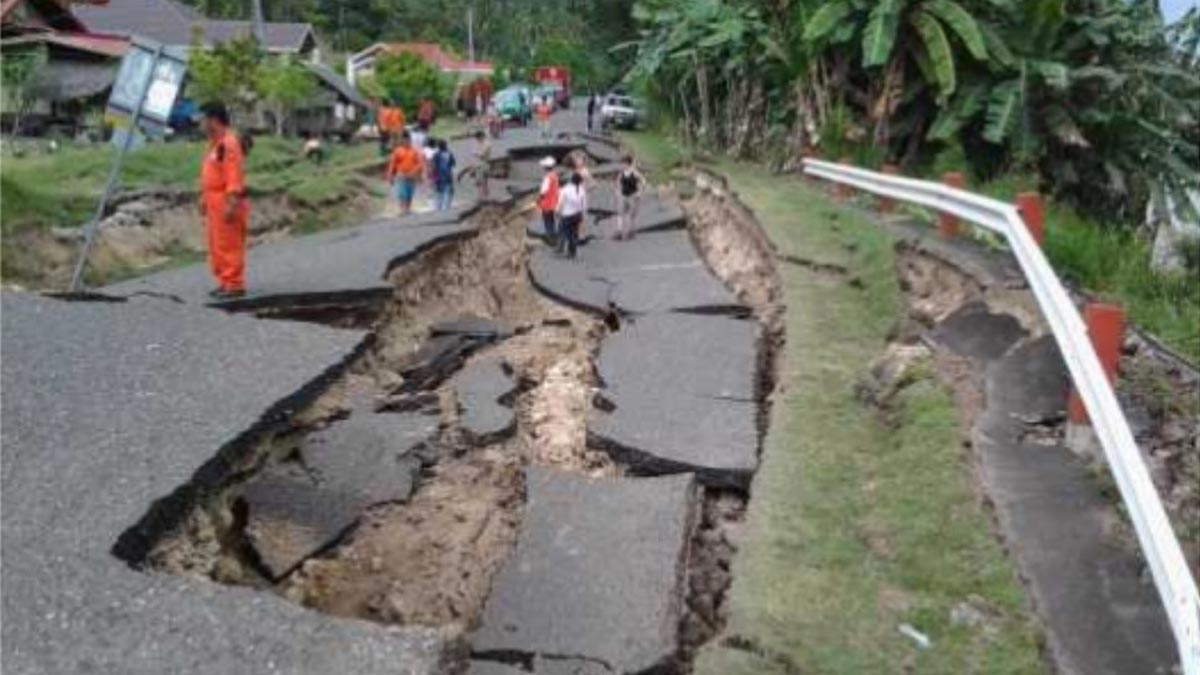 We remember some of the worst earthquakes that devastated the country.
PHOTO/S: via esquiremag.ph

The Philippine archipelago was formed as a result of the collision of the Eurasian Plate on the west and the Pacific Plates in the east, which subsequently also formed the Philippine Plate.

In other words, the entire archipelago was born out of earthquakes, a fact that has formed part of ancient Filipino mythology.

There are at least five deities in Philippine mythology that were said to cause earthquakes.

The Ifugaos have a god, Kolyog, who is believed to be the spirit of earthquakes.

Panlinugun, a Visayan deity, is considered as the god of the Underworld and of Earth, and is believed to cause earthquakes.

Lakanapi is a fire god known to ancient Kapampangans as a dragon serpent that moves in the veins of the Indung Tibuan, the mother earth goddess, causing her to move and produce earthquakes.

Dumakulem, a god in Tagalog mythology, is known as the sky god who creates mountains. Ancient Tagalogs believed that whenever there was an earthquake, Dumakulem was creating mountains.

It is remarkable how ancient Tagalogs associated earthquakes with the creation of mountains, which is scientifically true.

These various mythological beliefs point to the fact that ancient Filipinos were no stranger to frequent earthquakes, which they have incorporated into their rich cultural heritage.

In this seismic map of the Philippines created by Ralph Abainza, active faults, trenches, and earthquakes' epicenters from 1968 to 2018 are shown. 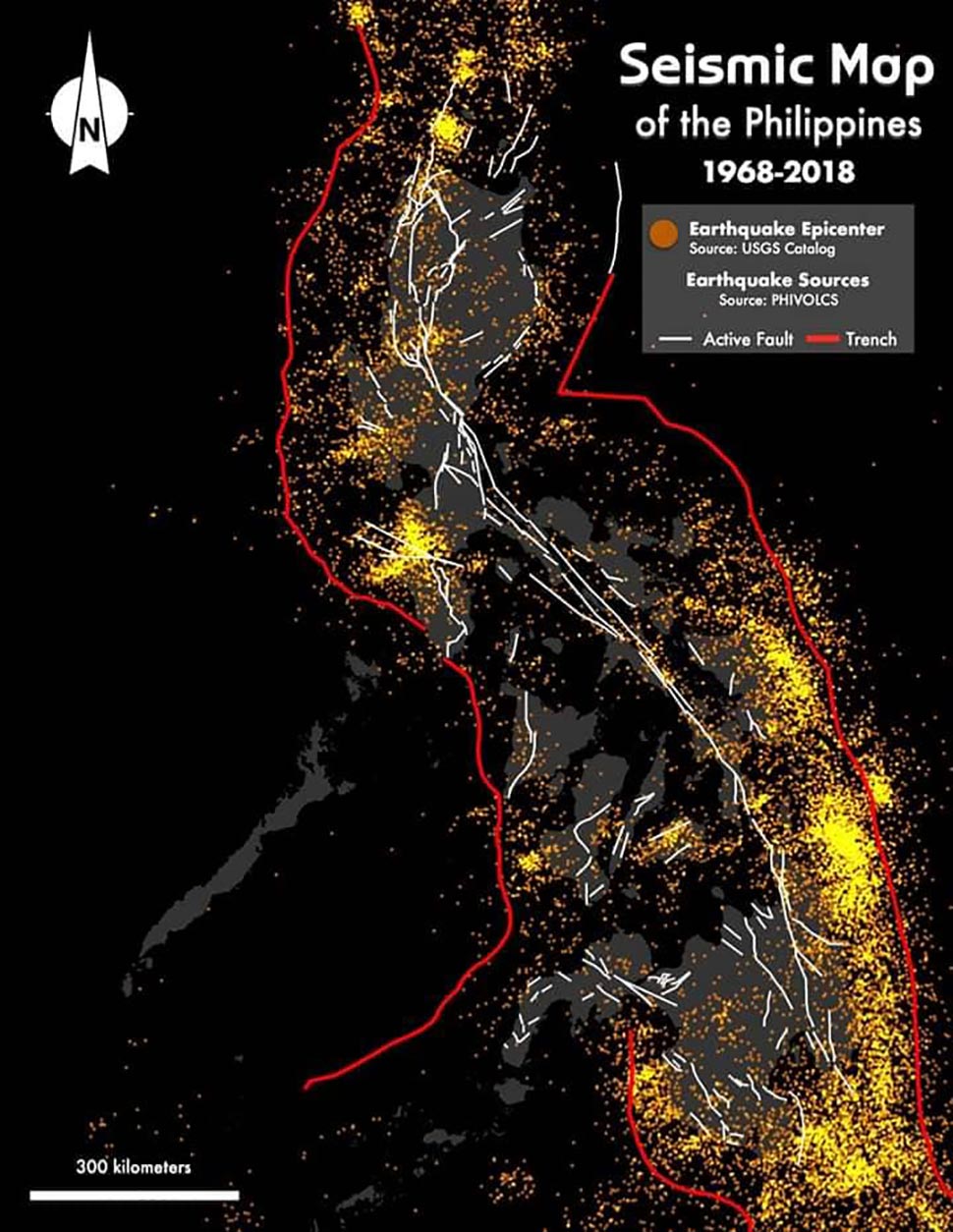 In a span of only 50 years, we can see that the Philippines has had thousands of earthquakes with significant magnitude to be recorded. In the following, we remember some of the worst earthquakes that devastated the country.

It was late Monday afternoon and people were just preparing to go home from work when tragedy struck: a magnitude 7.8 earthquake shook Luzon, with its epicenter in Nueva Ecija. Its effects were most felt in Baguio, Cabanatuan, Dagupan, and La Union.

Baguio suffered the most damage.

The earthquake collapsed 28 buildings, damaged roads, and caused landslides that blocked Kennon Road and Marcos Highway, the two main roads to access Baguio from the capital. It virtually cut off Baguio from relief, and the only way to go in was by air.

People were buried alive inside collapsed high-rise buildings, including the Hyatt Terraces Plaza, Baguio Park Hotel, and Baguio Hilltop Hotel. Some survivors in these buildings were miraculously rescued two weeks after the earthquake—after international rescue teams left the site assuming there were no more survivors.

In Cabanatuan, a six-storey school building collapsed during class hours, taking the lives of 154 people inside.

Dagupan City also suffered extensive damage, with 90 buildings having cracks or fractures, and another 20 collapsed buildings.

In La Union, 100,000 families were evacuated when several villages sank due to liquefaction.

Casiguran is a municipality in Aurora Province, 200 kilometers from Manila. On August 2, 1968 at 4:19 a.m., a magnitude 7.3 earthquake jolted the province, but most of the casualties were in Manila.

According to Phivolcs, the earthquake killed 270 people—one in Aurora, Quezon, one in Guagua, Pampanga, and 268 in Manila.

It also injured 261 people, all of whom were in Manila.

Because most of the damage and casualties were in Manila, the 1968 Casiguran Earthquake also came to be known as the "Ruby Tower Earthquake."

Ruby Tower was a six-storey building in Binondo. It collapsed, burying 268 people inside. Most of the people injured were also occupants of the building.

Another building in Manila that collapsed was the Philippine Bar Association Building. The Aloha Theater also suffered extensive structural damage.

On August 17, 1976, at ten minutes past midnight when people were sound asleep, a magnitude 8.0 earthquake rocked Mindanao. Its epicenter was detected in the Cotabato Trench, which generated a tsunami. According to PHIVOLCS, the tsunami was responsible for 85 percent of deaths, 65 percent of injuries, and 95 percent of missing persons.

The tsunami flattened towns and villages along the 700 kilometers of coastline bordering the Moro Gulf in the Celebes Sea. It swept away people, animals, and property. The 1976 Moro Gulf Earthquake is remembered as one of the worst disasters in the Philippines owing to the high number of deaths, injuries, and missing persons it caused. A total of 4,791 people died, 2,288 went missing, and 9,928 were injured. Another 93,300 were left homeless.

The earthquake also felled national heritage, including 10-centuries-old churches in Bohol and Cebu. The Church of San Pedro Apostol in Loboc, Bohol, built by the Jesuits in 1602, was reduced to powder and rubble and was deemed impossible to restore.

Apart from the damaged national cultural treasures, the earthquake also flattened thousands of houses. Some 14,500 houses and structures were destroyed, while another 73,000 were damaged. The earthquake cost Bohol and Cebu an estimated four-billion-peso worth of damages. It also displaced more than 348,000 people.

Magnitude measures the amount of energy released at the source of an earthquake, while intensity measures the strength of the earth's shaking based on the damage on people, structures, and geography.

On the afternoon of February 6, 2012, a magnitude 6.9 earthquake shook the islands of Negros, Cebu, and islands in the Western Visayas Region. The earthquake caused major landslides and huge cracks on highways, killing at least 52 people in Negros Island and Cebu Province. While the human fatalities are relatively low compared with other earthquakes of the same magnitude affecting densely populated areas, the damage it dealt to the infrastructure and surrounding geography was calamitous.

On the coastal areas, landscape was permanently changed when beaches were elevated a couple of feet above sea level, exposing sandstone and beneath the shore. Major highways in Negros Oriental also suffered extensive damage, paralyzing relief efforts in the affected areas. Water supply and electricity were unavailable for weeks in some areas.

The 2012 Negros Oriental Earthquake is one of the most studied earthquakes in the country. Its numerous geologic impacts in Cebu and Negros Oriental provided scientists at the PHIVOLCS vast amounts of data, which can minimize the devastation caused by earthquakes.

This story originally appeared on Esquiremag.ph.