How this Filipina found true love through a dating site 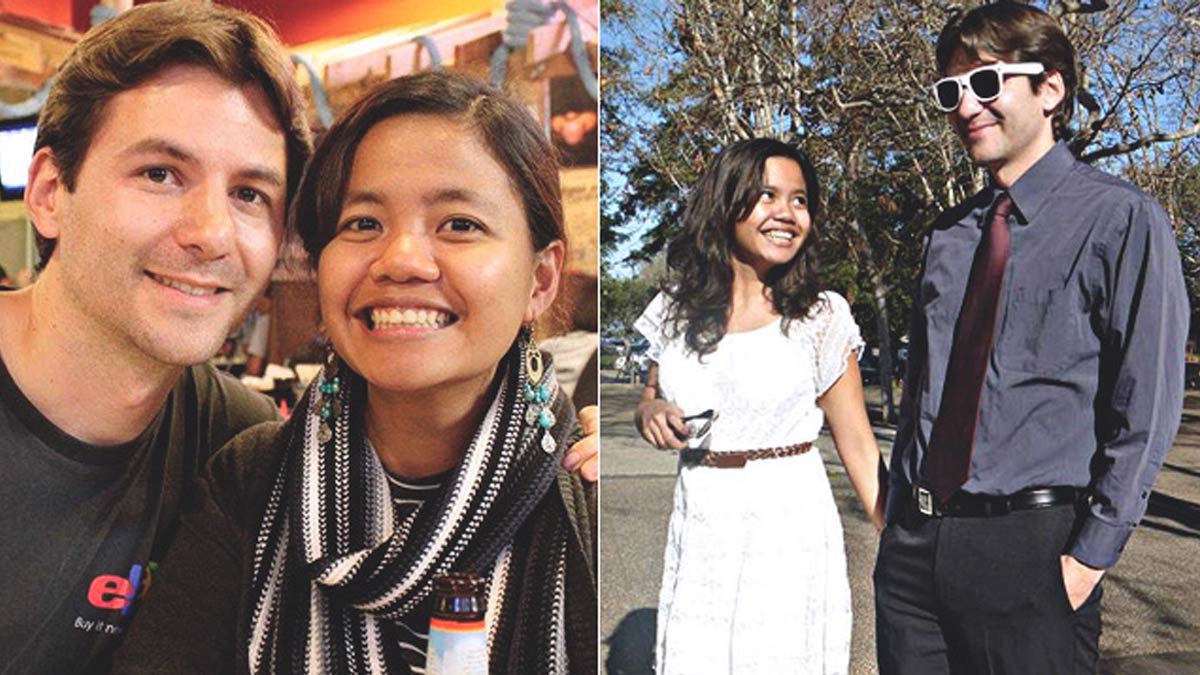 Meeting new friends has never been easier with so many apps and websites offering to connect you with people who you most probably match interests with.

But the effort of actually maintaining a friendship, much more a romantic relationship, really rests on how much you're willing to invest of yourself.

Jam and Jason Kotenko are two who decided to take the risk and eventually beat the distance and the odds by joining OkCupid in 2010.

How does online dating work?

"Online dating is like going out to a bar, but it's only filled with people who aren't completely incompatible with you," explains Jason via email.

"You still might not find someone, but at least you won't waste your time with people who turn out to be completely at odds with what you're looking for."

Jam adds, "It's like in-person dating, minus the BS, haha! The thing that I dislike about in real-life dating is that you come into it nervous, because you're afraid the other person won't like the real you, so you end up putting up a front, only to realize months into the relationship that you're exhausted from pretending to be someone you're not.

"Online dating gives you the opportunity to show the real you right off the bat without the pressure, and if the other person isn't really feeling your flow, you can easily move on to the next connection." 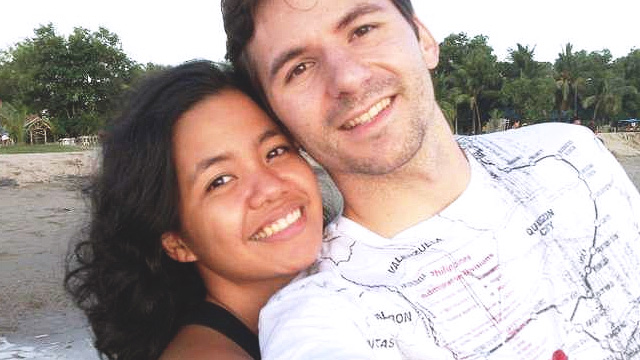 This is probably due to the fact that dating sites and apps widen the pool and filter prospects more efficiently, which is similar to what happened with Jam, who was based in Manila, and Jason, who was based in New Jersey.

OkCupid marked them as a 99% match.

"Well, we were both heavily addicted to answering the questionnaires that OkCupid made users answer in order to provide you with better matches," Jam shares. "It sort of became a game, for me personally."

It was she who reached out first. "I was very friendly. I told him that he sounded like a great guy to have a decent conversation with. Then I gave him my email address and told him that if he was interested in continuing our back and forth, he could shoot me a message outside of the platform. Because what it really boils down to is, who is the most keen to get off of OKCupid, to get to know me?"

Jason adds, "Getting into email meant that we would be able to get to know each other more deeply, rather than just exchanging pleasantries over and over. So, by email, I found myself easily captivated by her because she wrote so vividly and so often."

Jam and Jason's relationship took its natural and relaxed course.

Jason shares that there wasn't a lot of expectations on his part in the beginning, which actually made everything less stressful.

"I didn't really come into it with any plan beyond feeling a little less lonely. At that point I was happy to have someone to talk to and write messages back and forth with."

Jam agrees: "I felt very kilig, of course. It made me excited to see where our thing was going. It didn't really change much in our communication—things felt very natural, and that's what made us great, I think.

For the two, pacing was important, but it was also good to know when one should jump the gun.

Jason admits that relationships he had before Jam developed a little slower.

"I think that was just a natural reaction to not really being sure about things," he says. "In my relationship with Jam, we moved pretty quickly, because when you are on opposite sides of the world, you only get a few chances to figure it out. It felt so natural that it really just didn't make sense to delay." 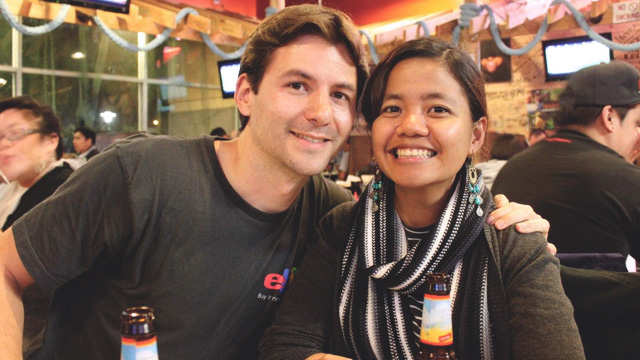 One could say that the "long-distance" aspect of their story wasn't as lengthy as other couples; the two became a couple after a month of constant communication, and in two more months, Jason was already flying to Manila to visit Jam for two weeks.

"I knew we were getting serious because after he got back to the States, it felt stupid that we were apart," says Jam. "He felt the same way, because he quit his job, sold his possessions, and moved to the Philippines five months after and stayed for a full year. That escalation, that undeniable desire to not be apart anymore was when we knew... this was it."

About a year-and-a-half into the relationship, Jason popped the question, but without the pomp and circumstance, which made it even sweeter.

"After a few months in the States, I knew it was time to take the next step," says Jason. "We ended up at the home of some friends of ours out in the country in Pennsylvania for New Year's, where we got very drunk."

"He got very drunk, haha!" Jam corrected. "In fact, I had to help him into bed because he said he was feeling dizzy. When I was about to go back outside to rejoin our friends, he told me to stay and snuggle. While he had me in his arms, he asked me if I wanted to get married. I thought he misspoke, so I asked him to repeat what he said and when he did, I stupidly asked, 'Are you sure?' I'm glad I did though, because his answer was one of the best things he ever said to me in all our years together, and I will never forget it: 'I am. I've been sure for a long time.'" 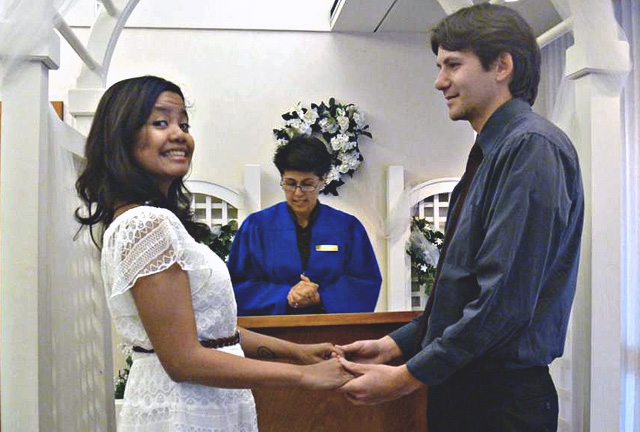 The two tied the knot shortly after in a simple ceremony. When asked about what the best thing about their wedding was, Jason says, "For us, it was the fact that it didn't put us in debt and cause a lot of stress. We got married in the courthouse, and I've witnessed a lot of friends spend a fortune on their weddings only to break up later. That said, you can have a nice wedding without going overboard. For us, it was just a matter of timing and our geographical isolation from both of our families and closest friends at the time we got married."

Interestingly, they purposely set their big day on Friday the 13th. "We felt like it was a lucky omen, contrary to popular belief, contrary to the protestations of our families, haha!" says, Jam. "I loved that we did everything so simple and so regular: I had a $20 white dress on. We didn't have guests at our wedding, only two of my relatives so they can be witnesses on paper. We had our 'reception' at one of our favorite restaurants. And for our honeymoon? Disneyland. What made it great was the fact that it would have been any other day in the lives of Jam and Jason, except for the fact that we now were man and wife."

Making compromises and settling down

Being from two different countries, Jam and Jason knew that they had to make several big changes in their lives. For Jam, she already knew that she was not the kind of person who thrives in a nine-to-five environment, which was why it was easier for her to make adjustments.

"I enjoy working from home," she says. "Of course, now that we have kids and they are still young, I personally made the decision to hold off on going beyond once-in-a-while freelance work so that I can be a more hands-on mom. My being a Filipino didn't really have anything to do with that decision."

She also stresses that she and Jason always dealt with big decisions together.

"When we bought our first home in Pittsburgh, we both agreed it was the right call because we would be within driving distance from his parents, so they would be able to spend more time with us whenever they wanted. When Jason got an offer to work in Singapore, we both decided it was a good idea because this time, it would give my family a chance to get to know our now-eldest son, who was still a young baby at the time." 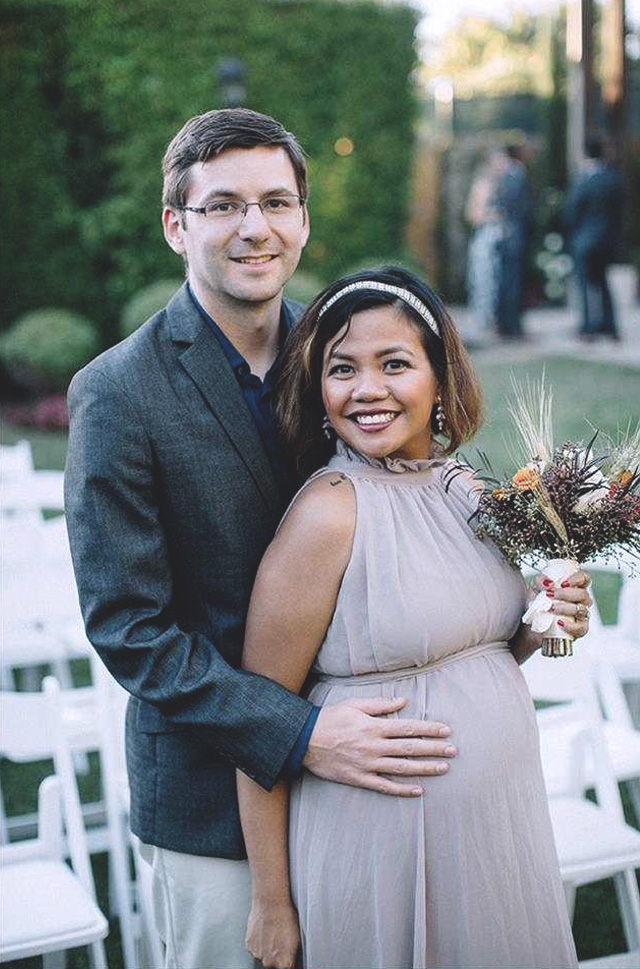 Like Jam, Jason's main priority was his growing family.

"My career has been the main focus for us in terms of providing for our family, so we've moved around a bit for jobs that I took. Jam has done freelance work that was possible anywhere, so it just worked out easily," he explains. "We both like to explore new places and we both often dream of where we're going to live next."

Now that they've been together for several years, the two have been enjoying a more comfortable and low-key relationship that feels secure without discounting new things to get excited about. 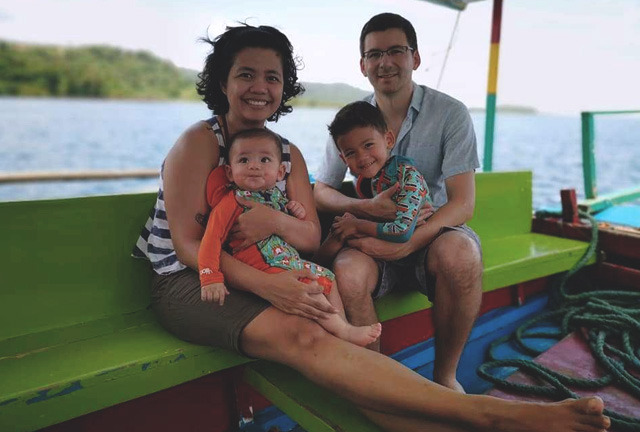 "If I could use a word to describe our love, it's stable. It's no longer the can't eat, can't sleep, claw your eyes out from too much passion and excitement kind of love, and that is a hundred percent OK!" Jam says.

"We're older and wiser now, and we're also parents to two wonderful boys, so we often have a lot on our plates. It's a relief to have a love that is reliable and strong that no longer requires proof because we just know. Any grand gesture that happens these days is just icing on top of an already delicious cake."

The same holds true for Jason, who relies on the certainty of what they have, especially that they have their children to focus on.

"These days with two young kids, it's just a lower level thing, because anyone who has had infants knows that your life is not really yours anymore," he notes, adding that the trust that they built is something that they both depend on.

"Things may be different, but neither of us has to doubt anything, because that foundation we created years ago is never going away. And when things settle down a bit with family and career, we can try to spend more time on just each other again."

While each person has their own journey towards love and fulfillment, the two admit that at times, you really do have to give destiny a leg-up.

To those who are still looking for their "The One," Jason advises: "On one hand, don't give up. On the other, don't try too hard. Focus on building a great life for yourself, and interact with other people without expectations. That's the best way to really find good relationships, and not go after things that won't work for you in the long run."

"Do not be afraid," Jam adds. "If you chance upon someone you feel is worth the effort, go for it! Relationships don't happen magically, so take the chance and put yourself out there. Don't be afraid to get hurt because that is part of the process. It will help you know yourself better and know what you want from a partner better."