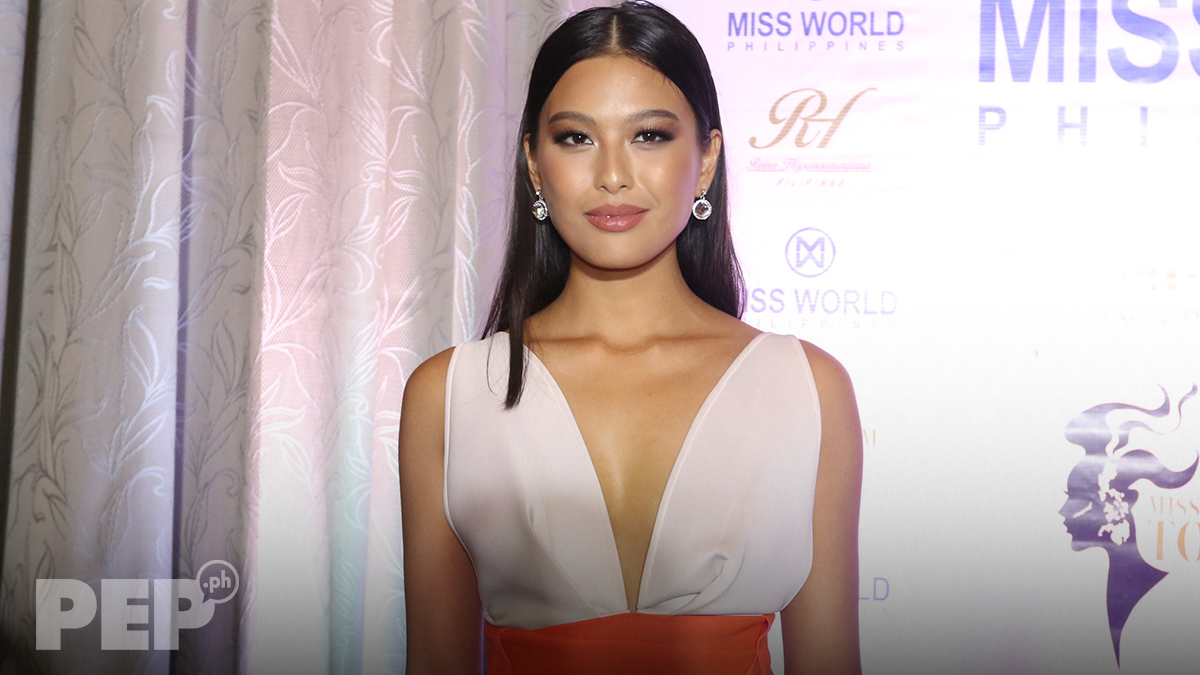 Michelle Dee is among the top 40 contestants of the Miss World Philippines 2019 pageant. She is the daughter of Melanie Marquez and Derek Dee.
PHOTO/S: Noel Orsal

Michelle Dee has finally decided to follow in her mom's footsteps and join a beauty pageant.

She is the daughter of Melanie Marquez, model turned beauty queen turned actress.

On Sunday night, August 4, Michelle was announced as one of the official candidates vying for the Miss World Philippines 2019 crown.

In an interview with PEP.ph (Philippine Entertainment Portal), Michelle said it was never really her dream to become a beauty queen.

She revealed, "Growing up… It was a far cry from all of these, from the limelight. I wanted to become a doctor, a psychologist."

It turned out her motivation to join Miss World Philippines was to land a high-profile platform for her advocacy.

Michelle explained, "I’ve always wanted to help and give back.

"The people who raised me, my grandmother and my mom, they’ve all been given a platform and they used that in order to give back.

"For me, my advocacy is mental illness and autism awareness. I would like to say that with the platform of Miss World, with Beauty with a Purpose, that’s what really is giving me motivation to continue in this industry."

The grandmother Michelle was referring to was the late Regina Dee, mom of her dad, businessman Derek Dee.

Michelle has been exposed up close to the suffering of the mentally challenged.

She told PEP.ph, "I grew up with two autistic siblings, so I know the kind of negligence and bullying they go through.

"I also know the lack of facilities that aren't here in the Philippines and other than that, I have several family members that have been diagnosed with different mental illnesses.

"That's why I also took up AB Psychology. So it’s very close to my heart."

Like her family members, the model-actress also experienced being bullied.

But the 23-year-old model actress is gladdened that her mom and her grandmother raised her with a strong mind.

She said, "For me, I’ve been a victim of cyberbullying and fake news.

"Honestly, my perception of bullying is it never really works [on me] because I've always been sure of how I am.

Michelle continued, "I'm aware that when you're pointing a finger at somebody, there are three fingers pointing back at you.

"So I really don't take those messages too seriously.

"That's what something my grandmother taught me early on in my life."

Last March, Michelle went on a medical mission in Sagada to provide help for children with developmental disabilities.

She wrote in her caption, "It's been an amazing experience with these kids. 5 years ago, some of them couldn't even converse and now you have them keeping up a conversation and even performing for you.

"So much progress can still be made but i'm glad we're on the right track. @centerforpossibilities #fromdisabledtoenabled"

To prepare herself for the competition, Michelle trained with Aces & Queens for months before she signed up with Miss World Philippines.

She revealed, "I can say that for Miss World Philippines, I've been training for a few months straight.

"But the idea has always been there. So I would train, back out, then go back into training again."

Michelle admitted that the training was challenging, but she was up for it.

She explained, "Everything you do for the first time is hard, but as we progress, as we keep training, you get the hand of things.

For now, Michelle has decided to put some of her showbiz commitments on hold to focus on the beauty pageant.

She told PEP.ph, "My acting career is on hold for now because I want to put my one hundred percent on this."

"I was in a teleserye, Love You Two, with Jennylyn Mercado and Gabby Concepcion.

"I think they already pulled out my character, if not, they'll pull it out.

"And I have a talk show with Thia Thomalla and Winwyn Marquez, I think that is also on hold for now."