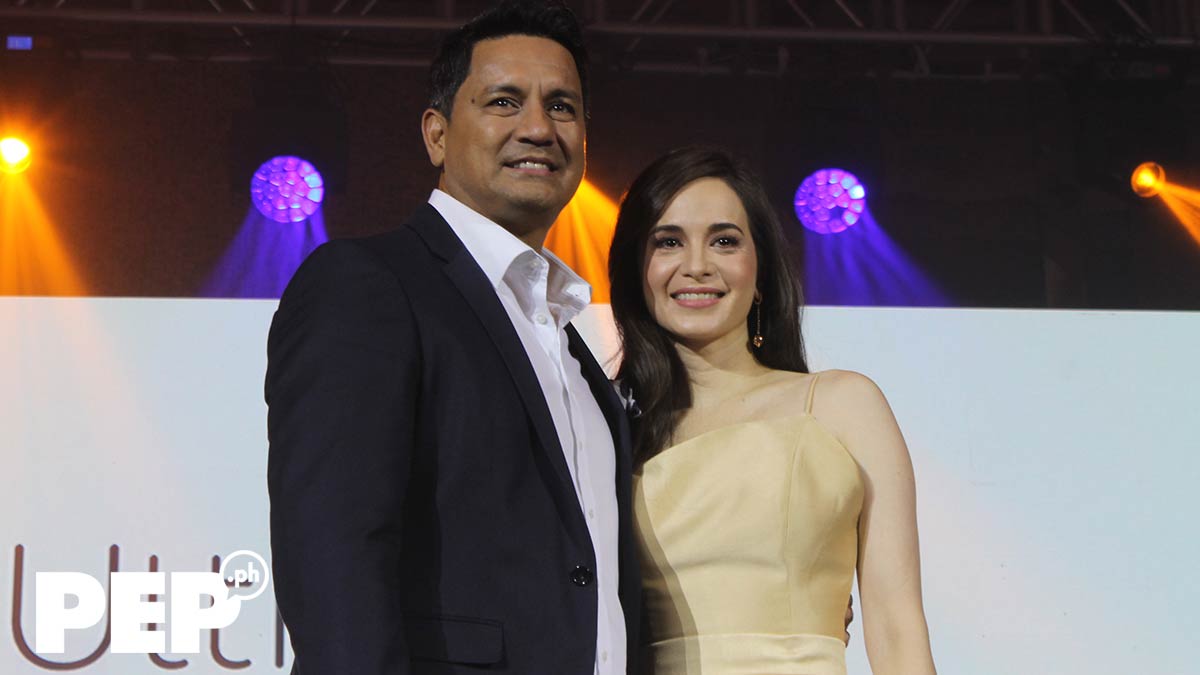 Richard Gomez and Lucy Torres both agree that it's important to stay interesting to each other. Lucy says, "You have to nurture what you found interesting about the other person constantly."
PHOTO/S: FM Ganal

Married for 21 years, Richard Gomez and Lucy Torres have simple ways of keeping their marriage strong and happy.

"We laugh a lot," Lucy tells PEP.ph (Philippine Entertainment Portal) after the launch of Ultherapy For Two. This event was held last August 13, at Shangri-La The Fort in Bonifacio Global City.

The Leyte Fourth District Representive continues, "It's a very easy relationship. We find humor in so many ways.

"At saka low maintenance kami. We don't have to do big things for each other to make us appreciate the relationship we have.

For Richard's part, the Ormoc City mayor adds with a quip, "We enjoy our company together. She talks a lot, I listen more."

Richard says the best lesson he has learned from his marriage is the deliberate choice of being together.

He says, "It's always nice that we always like to find time for each other.

But with their respective duties as public servants, how do they stay in touch when one of them is working in Ormoc, while the other is staying in Manila?

Richard and Lucy put today's technology to good use by video chatting through FaceTime.

"I think FaceTime is very important. It's the thing of the new generation," Richard says.

"Like before, I remember when I was young, my parents went to the States. I never saw them. Puro letters lang. But now, even when we're apart, we can still see each other and talk to each other through FaceTime."

Lucy adds that text messaging has its benefits too.

She says, "We don't do snail mail, but then you look through messages on your phone. They're different from the written word, pero at least ito, the thought is still nice to read back on kapag nasa phone mo.

"You take what you can. You are thankful for what's there and you celebrate that instead of pining for what can't be. And what can't be right now is day-to-day na together kami, kasi physically ang layo ng Ormoc talaga sa Manila. Thank God there's FaceTime."

HOW RICHARD AND LUCY DEAL WITH CONFLICT

Richard admits that he isn't a fan of conflict, but when an issue needs to be talked about, he promptly sees it through.

He says, "You have to talk about things all the time. If there are issues that need to be resolved, you have to really talk about it and find the solutions. Find ways to settle an issue always."

She says, "If it needs to be talked about, then we talk about it. What solution needs to be done? How do we do it?

"He's able to break down in very practical terms or in a very objective way what needs to be done. Hindi yung you're feelings and all emotions. Lalo na when it's work-related, ayaw niya na emo.

RICHARD AND LUCY ARE CONSTANTLY EVOLVING

Another piece of advice that Lucy considers important for a marriage is constant interest in one's partner.

Lucy explains, "I think the best lesson for any married couple—we've reached 21 years na—we're still this way to each other because we haven't taken each other for granted.

"I always see him with new eyes. It's important also to keep yourself interesting to your partner and with him, you can't be bored with this guy because he's never stagnant.

"He's always into something new. I find that attractive in him.

"Don't let it go. You have to nurture what you found interesting about the other person constantly. You constantly learn, constantly evolve.

"You're essentially the same person, but your interests expand. That should keep you interesting to your partner."

Richard and Lucy got married on April 28, 1998 at Sts. Peter and Paul Parich Church in Ormoc City.

On the day of their 21st anniversary, the couple posted their respective throwbacks to the key moments of their relationship.

Richard looked back on the shampoo commercial where he crossed paths with his future wife. His Instagram post read: "This is the tv ad where I fell in love with this 19 year old lady.

"It didn't take too long and I asked her to marry me.

"Its been 21 years since and it feels like we just got married yesterday.

"Happy Anniversary to you my love!!!"

As for Lucy, she recalled the day Richard proposed to her.

"We were in the balcony of my parent's home in Carlota Hills, it was the eve of my birthday and a handful of us were around a small table, a view of the sea before us.

"When the clock struck midnight Richard pulled me close, locked me in his piercing gaze, and asked me to marry him. I said yes in a heartbeat.

"I was in denim shorts, a t-shirt, slippers. He was in shorts, a shirt, sneakers.

"The ring was not in a box or pouch, it was just swimming loosely in his pocket for hours the whole evening. Until he pulled it out to slip it on my finger.

"He took this photo moments after we got engaged. And if I look dazed it's because I was. I was going to marry this man I have loved since I was 12 years old, spend forever with him, the love of my life.

"21 today. You are my home @richardgomezinstagram. Thank you for a love that always feels like summer."

On special occasions such as birthdays and anniversaries, Richard and Lucy are never shy about expressing their for love for each other on Instagram.

Sometimes, they don't even need a particular occasion to express it.

Recently, Lucy posted another throwback on her Instagram feed. This time, it looked back on their honeymoon.

The caption read: "Here we were in the airport, on the second leg of our honeymoon en route to London from Switzerland. Every day was wonderful, new. We would take long walks, have slow meals, many little stories shared between us. We would just go from moment to moment, allowing each to unfold as it did. There was no fear of missing out on anything, no mad rush to do or see so much at every new stop. And yet the day was always full, and beautiful, because we had each other. And that was enough."

Richard and Lucy have an 18-year-old daughter, Juliana, who is a freshman at the University of the Philippines, Diliman. She will turn 19 on September 8.